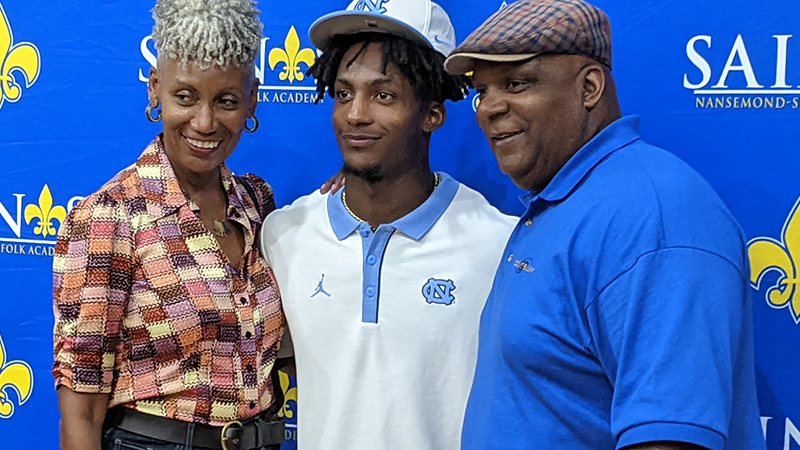 Former Nansemond-Suffolk Academy football standout George Pettaway, center, shown with his parents Tricina Pettaway and Russell Pettaway Sr. on the day he signed his letter of intent to play for the University of North Carolina, shined in his Tar Heels debut, scoring a touchdown in their 56-24 win over Florida A&M in their season opener.

George Pettaway wasted no time making a name for himself at the college level.

Pettaway, a standout running back at Nansemond-Suffolk Academy, shined in his freshman debut for North Carolina, scoring a touchdown in the Tar Heels’ 56-24 home win over Florida A&M Saturday before 46,130 at Kenan Stadium to open the season.

Pettaway, who carried the ball four times for 41 yards, eluded multiple Florida A&M defensive players on his way to a 29-yard touchdown run in the fourth quarter.

Wearing number 23 for the Tar Heels, Pettaway got his first official collegiate touches in the second quarter, catching a pass for a five-yard loss, and then on the next play, running up the middle for 12 yards. That gain was negated in part by a North Carolina holding penalty.
He had one carry in the third quarter for a short gain before his scoring run in the fourth quarter, which was preceded by a 12-yard run two plays earlier.