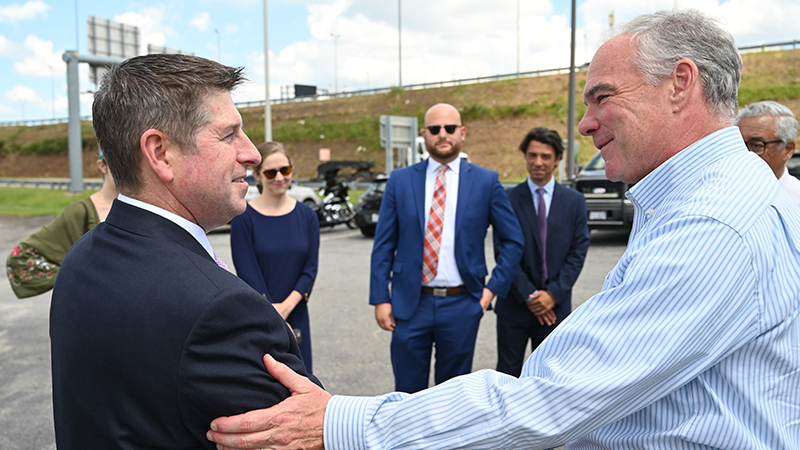 Sen. Tim Kaine paid a visit to the Port of Virginia’s Portsmouth International Terminal last Tuesday to look at the footprint for wind turbine manufacturing and Dominion Energy’s assembly footprint for installing 180 turbines off the Virginia Beach coast.

Sen. Tim Kaine had several reasons for his recent visit to Portsmouth International Terminal at the Port of Virginia, which included getting a look at the footprint for Siemens Gamesa’s new wind turbine manufacturing facility and Dominion Energy’s assembly footprint to prepare for the installation of 180 wind turbines off the Virginia Beach coast.

Kaine, who visited Tuesday with Rep. Bobby Scott as part of several stops in Hampton Roads and the Eastern Shore, noted Siemens Gamesa’s $200 million investment to develop more than 80 acres of the terminal, and manufacture the blades for the wind turbines.

He also sought to highlight the $225 million in money for dredging to make the Norfolk operation at the port the most competitive on the East Coast. Combined with state money, the dredging project is fully funded and will widen the channels to 1,400 feet and make them 55 feet deep. This will allow for the supermax tankers at the port. Kaine said those things will be good for commercial and military operations.

He called the developments an exciting opportunity for Hampton Roads.

“Virginia is going to be first in the nation in terms of offshore wind component manufacturing,” Kaine said. “The Siemens Gamesa manufacturing facility will be the first, and it may not be the last, but we want to be number one, particularly on the East Coast.”

He noted the natural advantage of the Port of Virginia with the channel coming in and out of the port not having any overhead crossings to navigate. He said it’s poised to see major federal investments there.

“The Port of Virginia has a strategic edge for a very long time if we’re willing to make these investments,” Kaine said.

Kaine also addressed the much-talked-about proposed Port 460 Logistics Center looking to locate on 540 acres off of U.S. Routes 460 and 58, and Pitchkettle, Kings Fork and Murphys Mill roads. City Council delayed a rezoning request on the project last month. Port officials have expressed their support for the project, which would bring with it 10 warehouses.

Barbara Nelson, vice president of development and transportation policy at the port, said it has seen record growth over the past two years, which has created pressures and opportunities for the port as it needs high-quality industrial properties.

“These are issues for local voters to elect local officials, and the local officials need to make the right decisions,” Kaine said, without taking a position on the project itself.

The project reminded him of one in 2005 in the Base Realignment and Closure round when he said the Pentagon decided to unify the National Geospatial-Intelligence Agency on the western part of Fort Belvoir’s U.S. Army base in Fairfax County in Northern Virginia.

Kaine said it was supposed to bring in many jobs, but it was happening in an area with a lot of traffic. He said it was necessary to provide a transportation network around it, and it used American Recovery Act money in early 2009 to build out the infrastructure.

He said a locality’s need for transportation funding to spur a regional economic development project would likely move it higher up the list of priorities.

The port, he said, is poised to continue on a high growth curve, especially with record cargo volumes that have made it the busiest four-month stretch in its history.

“Obviously, the port officials … weren’t asking us, ‘Here’s a road plan. Can you fund it?’ They’re not there yet,” Kaine said. “They’re doing their work with the community. What is the right answer? But certainly, I wouldn’t be surprised if the leaders of the community came back to us at some point and tell us, ‘Here’s what we need.’

“And the good news is Virginia is going to get a lot more transportation infrastructure dollars over the next five, six years because of the infrastructure bill. So if you need investment and the dollars aren’t there, actually, this is the perfect time to be exploring what you need because Virginia is going to get significantly more transportation monies than would have been the norm, at least for the next five or six years.”