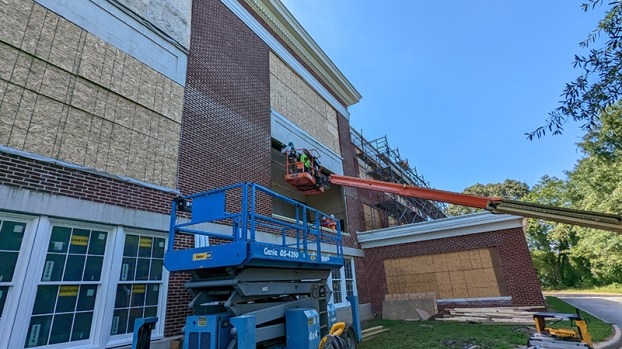 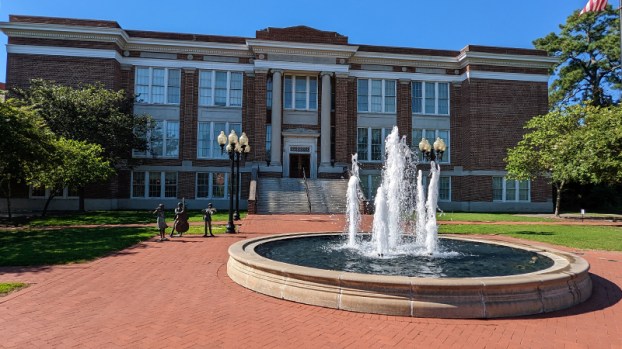 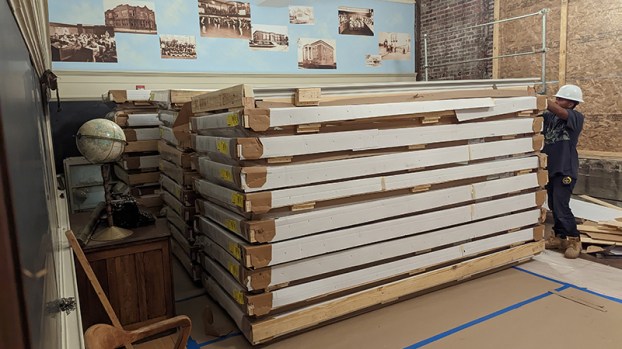 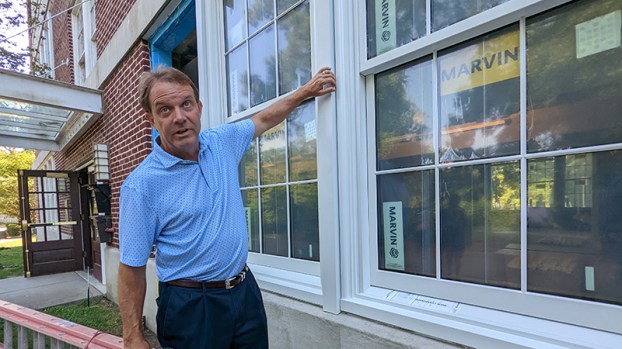 C.W. Brinkley Inc. Construction president Mark Brinkley outlines the renovations currently underway to the northeast side of the Suffolk Center for Cultural Arts. The work began in July and is expected to take between 18 to 24 months.

In most ways, the renovations to the Suffolk Center for Cultural Arts building will allow it to retain its hallmark features while helping preserve the building for decades to come.

But the feature that’s likely to be most noticeable at the former Suffolk High School, 110 W. Finney Ave., will play a critical role in that effort.

The Tnemec coating that will be applied to the building, which will last about 15 years according to C.W. Brinkley Inc. Construction president Mark Brinkley, will keep water out of the building and prevent the kind of damage that made the expansive renovation necessary.

But that coating will come a little later in the process.

The current work taking place on the northeast side began in July, with the first of the 205 new windows being installed. Bricks have also been taken out above the windows and new flashings — water-repellent material put in around a window to help protect it and the window framing from water damage — and lintels are being installed. Lintels are used in buildings for structural support.

“We basically came in and demoed everything out and got it back to the original concrete brick walls,” Brinkley said as he showed the work being done in one of the center’s dance studios. “We’re going to come in and put in new wood framing so we can insulate it.”

That will allow the building to be more energy-efficient, he said, and ultimately, all of the work is designed to keep water out of it.

But because the northeast side of the building has the most damage, the restoration work started there.

“The northeast side has been the worst side,” Brinkley said. “It’s the side that gets most of the bad weather, and so we wanted to do that side first.”

Mac Birdsong, a charter member of the Suffolk Center, board member of the center’s foundation and a key fundraiser for it, said the damage to the building was immeasurable.

“The biggest mess you ever saw,” Birdsong said. “I mean, plaster falling off the wall, it was terrible. We had to move or we were going to lose a whole lot of this building.”

The work has been needed due to what Suffolk Center executive director Lorelei Costa Morrow has described as severe water damage that had been deteriorating the inside of the building.

But it needed city approval for the renovations.

City Council in February unanimously reversed a Historic Landmarks Commission decision to allow the building to have a dramatically different look.

The commission had approved a certificate of appropriateness a month earlier to allow the center to replace its windows on both the original and rear addition of the building, along with replacing the steel lintels and all of the wood and metal cornice and dentil sections to be replaced with exterior insulation and finish systems, or EIFS.

However, it did not approve the center’s use of the Tnemec coating.

The renovations will eventually happen throughout the building, according to Brinkley, who said the process will accelerate as it repeats the work to the front of the building, expected to begin “after the first of the year” and to the southwest side likely sometime in the middle to end of next summer.

And it’s happening even as the center’s ticker on its website counts down the time until the Kyiv City Ballet arrives for a four-day residency in just over two weeks.

Seating in one section of the Birdsong Theater is also being replaced. Costa Morrow said they were supposed to have arrived and be installed in August, but instead are now scheduled to arrive Sept. 6.

“We do have all of our contractors lined up, and if everything falls into place, there’ll be no problem,” Costa Morrow said. “We’ll have the new seats ready for Kyiv. And gosh, if they don’t arrive Tuesday, I will be one stressed-out person.”

But the center has a contingency plan in place for it to ensure everyone who has tickets will still have a seat. As it awaits that, it has started work on the first phase of the lighting and sound improvements in the theater. The next phase of that work is likely to take place next summer during the theater’s quiet season, she said.

At the end of the Kyiv City Ballet residency, Costa Morrow said they will be announcing how much money has been raised for the center’s capital campaign and its lead donors, and it will also outline challenge grant opportunities. As of last month, it had raised $3.6 million of its $4.5 million goal.

“We’re pleased with the progress so far, but we still have some money left to raise,” Costa Morrow said.

Sam Markham, a superintendent with C.W. Brinkley, said he can recall skateboarding around the building before the building began being renovated for the Suffolk Center in 2004, and he’s excited to be a part of the renovations now.

“It’s nice to see this coming along,” Markham said.