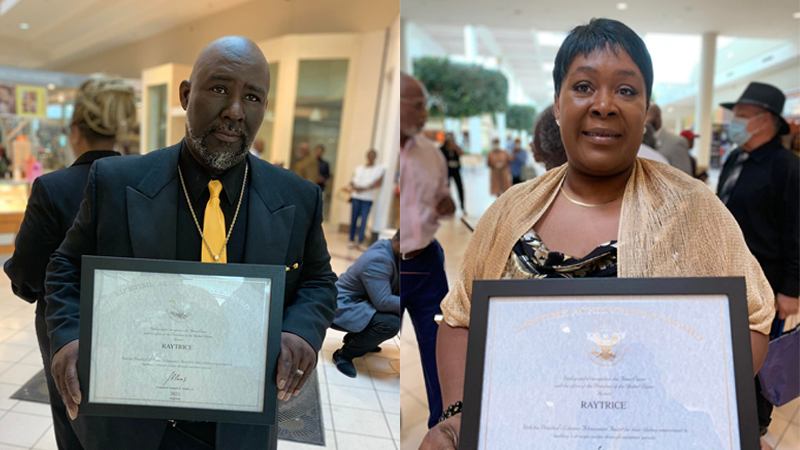 But now, things are reversed for a moment, and Suffolk native Raymond Felton and his wife, Letrice, are the ones whose spirits are being lifted as honored recipients of the President’s Lifetime Achievement Award.

“For years we watched others receive awards and nothing came our way,” said Raymond Felton. “The lack of awards made us humble and determined; sometimes watching everyone get acknowledged, except for your group, really hurt deeply. Giving up was never an option, though; this is the point where faith becomes your option.”

Inspiring audiences under the stage name “RayTrice,” a blending of the couple’s first names, the gospel music duo is trumpeted with providing some 4,000 of volunteer service over the past 17 years.

As a result, their humanitarian efforts have been formally recognized by AmeriCorps, which sent them an award certificate through The White House, along with a congratulatory letter from U. S. President Joe Biden.

“With grateful recognition, the AmeriCorps and the Office of the President of the United States honors RayTrice with the President’s Lifetime Achievement Award for the lifelong commitment to building a stronger nation through volunteer service,” states the certificate the Feltons received and signed, “President Joseph R. Biden Jr.”

In his personal letter to the Feltons, Biden commends them for their hard work and positive, productive community attitude.

“The American story depends not on any one of us, not on some of us, but all of us,” begins Biden’s letter. “I congratulate you on taking it upon yourself to contribute to the public good and I’m proud to present you with the President’s Lifetime Achievement Award in recognition of your 4,000 hours of service to this great nation. Throughout our country’s history, the American story has been strengthened by those who combine an optimism about what can be, with the resilience to turn that vision into reality. I know I’m not alone in recognizing that those who are willing to step up and volunteer in service of community and country are essential to the ongoing work of forming a more perfect union.

“By sharing your time and passion, you are helping discover and deliver solutions to the challenges we face, solutions that we need now more than ever,” the letter continues. “We are living in a moment that calls for hope and light and love. Hope for our futures, light to see our way forward, and love for one another. Through your service, you are providing all three. On behalf of the American people, I extend my heartfelt appreciation to you for your volunteer leadership and I encourage you to continue to answer the call to serve. The country is counting on you.”

Married for 17 years, the Feltons took their wedding vows in Southampton County, during a hurricane. Born in 1968 in Obici Hospital, he is a 1988 Suffolk High School graduate, where he was also the school’s last drum major. She was born in 1976 at Southampton Memorial Hospital, is a 1995 Franklin High School graduate, was active in sports and sang in the school choir.

Since meeting and marrying, the Feltons have been devoted to, and focused on, their music and volunteering. But they could not have risen to national prominence without much support and encouragement.

“Rev. Glenda P. Murray Kelly told the both of us that one day it would be our time,” said Letrice Felton. “For 15 years she has been grooming us for greatness by placing ‘RayTrice the Unstoppable’ in front of artists like Shirley Ceasar and Gregg McClemore. We know so many artists from here to Texas; everyone is like family. We also thank Savage Music Productions, Inc., for letting us have creative control over our music.”

In 2020 during the pandemic, RayTrice performed live on AM 1410 WLPM radio 11 times in one year, with radio host, Ed Joyner.  They now perform on Saturdays at 10 a.m., on the Daily Gospel Network with Aquila and Priscilla Ministries.

The couple also posts YouTube videos of their music, praise and outreach, with Raymond once telling one interviewer, “we do not want to be on your gospel radio station because guess what, that’s what all the Christians are (already) listening to .  .  . (we want to) reach the people that aren’t already up in the church.”

The Feltons accepted their award Aug. 27 during ceremonies held at Chesapeake Square Mall, in H.P. Music and Arts, and sponsored by G Paris Media Group.

Every year, AmeriCorps enrolls more than 250,000 individuals to serve as an AmeriCorps members or AmeriCorps Seniors volunteers in organizations trying to make a difference in communities across America. These service experiences vary based on the program of service and the organization with which they serve.

AmeriCorps, which is officially known as the Corporation for National and Community Service or CNCS, is an independent agency of the United States government that engages more than five million Americans in service through a variety of stipended volunteer work programs in many sectors.