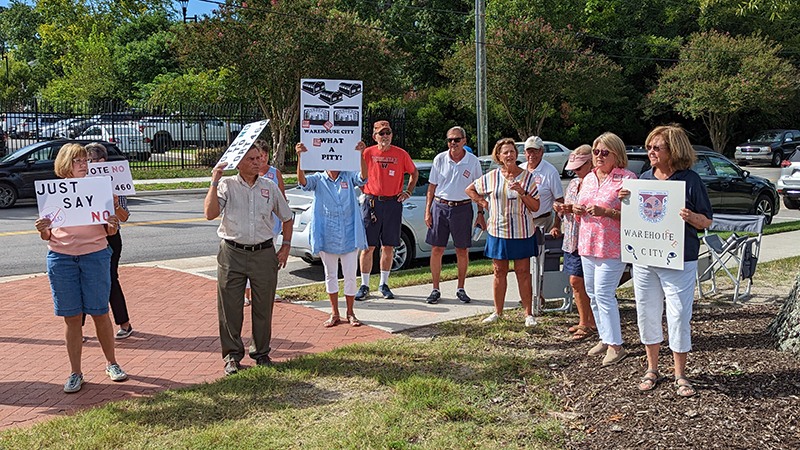 Residents opposed to rezoning for the Port 460 Logistics Center gathered outside City Hall for a rally Wednesday, reiterating their objections to the 540-acre project. Council is set to vote on it at its Sept. 21 meeting.

Mayor Mike Duman teased in his most recent Facebook Live that City Council’s meeting agenda Wednesday would largely be an uneventful one.

There were no public hearings and few things for members to vote on, and though there were a number of briefings during both the work session and regular meeting, those went expeditiously.

But residents had much to say during the non-agenda public comment period, especially about the proposed rezoning for the Port 460 Logistics Center, which would bring 10 warehouses and a smattering of retail to a 540-acre area off of U.S. Routes 460 and 58, and Pitchkettle, Kings Fork and Murphys Mill roads.

More than 20 people greeted council members as they arrived to their Sept. 7 meeting, and the same number spoke about the project during the public comment period, though three expressed support for it.

The opponents to the rezoning held the rally outside City Hall in between council’s work session and regular meeting, continuing to hammer home arguments that the project would increase traffic, clog roads and be harmful to the environment, while not providing the projected jobs and economic benefits to the city.

Those opponents, 17 total, also spoke out during the non-agenda public comment period of council’s meeting. There were three people supporting the project who also spoke, including Doug Smith, president and CEO of the Hampton Roads Alliance and Barbara Nelson, vice president of development and transportation policy for the Port of Virginia.

Later in the week, Gov. Glenn Youngkin came out publicly in support of the project.

A vote on the rezoning is scheduled for council’s Sept. 21 meeting, having been tabled for 30 days at its second August meeting.

Key votes from the council meeting:

The money from the Department of Criminal Justice Services requires a $68,087 local match, which is already provided for in the current consolidated grants fund budget.

The DMV money will support overtime and training for alcohol traffic enforcement and overtime and equipment for speeding enforcement for the city’s police department. The money increased planned income and expenses by $27,142 and requires $13,571 worth of in-kind support from the department’s operating budget for fuel and maintenance.