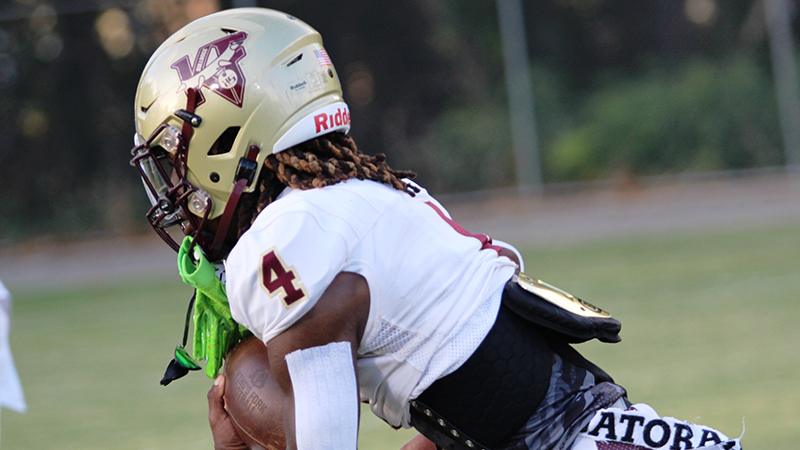 Billed as perhaps the most intriguing game of the week across Hampton Roads, the King’s Fork Bulldogs traveled to Chesapeake to take on the Indian River Braves in a key Southeastern District matchup on Sept. 9.

Coming in, Indian River had won five of the previous six encounters, including the most recent meeting by a count of 33-12 in 2019. The Braves also led the all-time series 11-5. However, none of that mattered to the Bulldogs, who jumped out to an 8-0 first half lead and controlled the second half on their way to a 28-0 shutout.

It marked the first time ever that King’s Fork blanked Indian River in the head-to-head matchup and handed the Braves their first shutout loss at home since 2013.

While satisfied with the performance, Bulldogs coach Anthony Joffrion remained steadfast in his approach, and that is to still be playing for the ultimate prize in three months.

“Our goal is Dec. 10. I still think so much about last year, coming up short in that state semi,” Joffrion said, alluding to the 35-28 loss to Varina, the eventual Class 4 state champ, last December.

“I know it sounds a little cliché, but we preach going 1-0 every week, trying to get to Dec. 10. I think last year at times, we were surprised how far we went. That senior group did a wonderful job setting the culture. Now our kids are really bought in, they take the tough coaching, are disciplined. They have the same expectation — to get to Dec. 10.”

The Bulldogs expected solid performances from quarterback Cameron Butler and running back JaVon Ford, each of whom delivered in crucial situations throughout the road contest. Butler capped a nine-play, 73-yard drive in 4:09 that concluded with a 15-yard touchdown pass to fellow senior Kaletri Boyd. Ford added the two-point conversion to give them an 8-0 lead with 30 seconds left in the first quarter.

That would remain the score until 3:49 to go in the third period. After Butler scrambled for eight yards on a fourth-and-7, Boyd finished off the lengthy 11-play, 91-yard drive that took 5:31 off the clock with his seven-yard touchdown run.

“Whenever you need a play in a big moment, Cameron Butler always shows up and finds a way to get one,” Joffrion added.

“JaVon Ford is the definition of King’s Fork.  He’s very selfless and does a great job leading,” he said. “A lot of those younger guys look to him as a leader.”

Ford gained many of his 165 yards on 21 carries during the third period.  To no surprise, he gave credit to his blockers, featuring from left to right:  junior Jaydin Dildy, sophomore Cassidy Mcgrit-Hart, senior Reginald Saunders, sophomore Xavier White and sophomore Justin Irby.

“The line started it all. They make it happen for me,” Ford said.

“It all started in practice with the game-plan. It was a really physical game. We came out a little slow, but we picked it up at half-time. I’m also very confident in my defense.”

At least 15 different Bulldogs recorded a tackle, not including senior defensive end Isayah Singleton, who recovered a fumble in the fourth quarter to put the win on ice. Best of all, through eight quarters of football this season, King’s Fork has yet to allow a single point.

“Our first-year offensive coordinator, Laray Kindred, played at Elizabeth City State and was under Casey Turner, who has been a great offensive coordinator, and really learned.  We were able to get Pete Gale, who really emphasizes running the ball.  They’ve done a great job game-planning offensively, attacking defenses.  We’re only going to get better as we get more experience as a staff.”

In the final stanza, Butler added a 16-yard touchdown run on fourth-and-3 and had his second touchdown pass of the night on a 10-yard strike to receiver Jahmel Mackey, part of a sophomore class that Joffrion calls “super talented.”