Nothing stilted about Taste of Suffolk, as event draws thousands downtown to sample local food 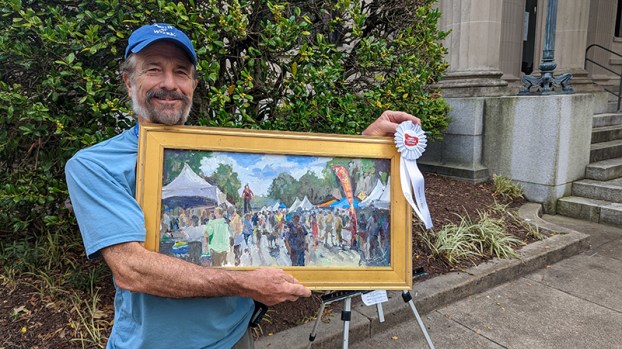 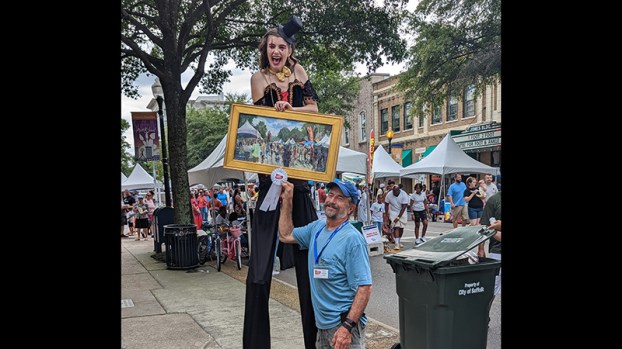 Rowan Ellis, left, of Virginia Beach, and artist Kirk Larsen of Hicksville, New York pose together with his painting, “Main Street Boogie,” which Larsen created Saturday as part of the Plein Air Festival’s Quick Draw competition, held in conjunction with the Taste of Suffolk. The scene in the painting depicts Ellis walking on stilts. 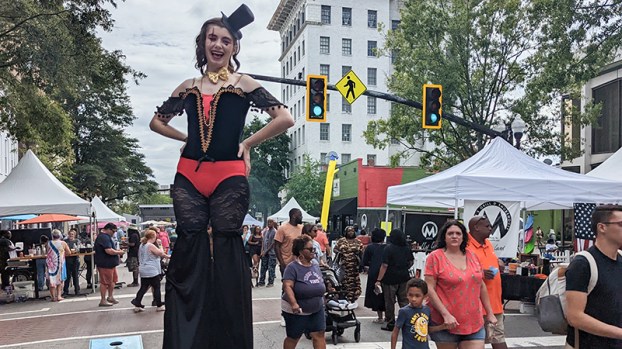 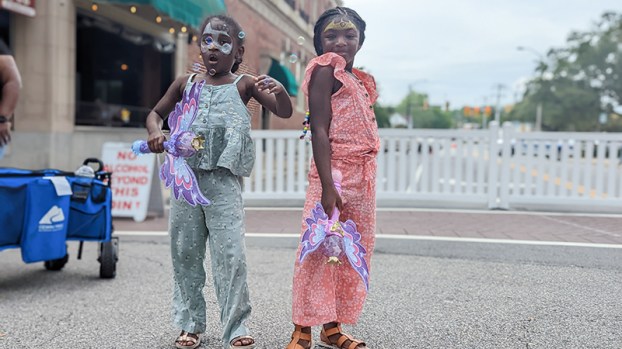 Gabrielle McCary, 4, and Inara McCary, 6, of Hampton, take a break from dancing on Main Street to pose during Saturday’s Taste of Suffolk. 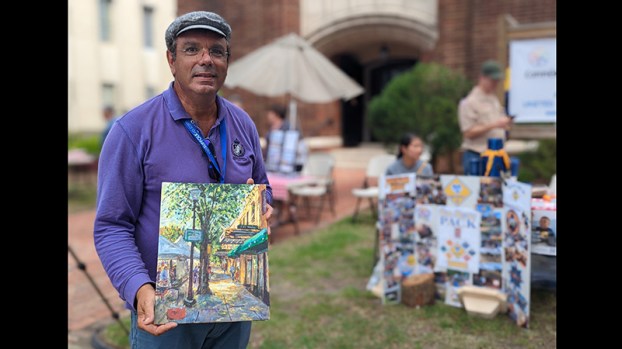 Dimitris Voyiazoglou of The Hague, Netherlands, shows the painting he worked on during Saturday’s Quick Draw event, the culminating event of the 2022 Plein Air Festival held throughout the week. The Quick Draw event was held in conjunction with the Taste of Suffolk. 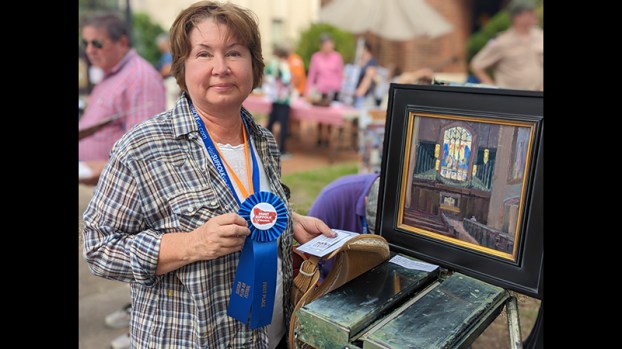 Tatyana Robberts, who was born in Russia but currently lives in O’Fallon, Illinois, won the adult competition among Saturday’s Quick Draw painters with, “Talking to God.” The Quick Draw event concluded the six-day Plein Air Festival and was held in conjunction with the Taste of Suffolk. 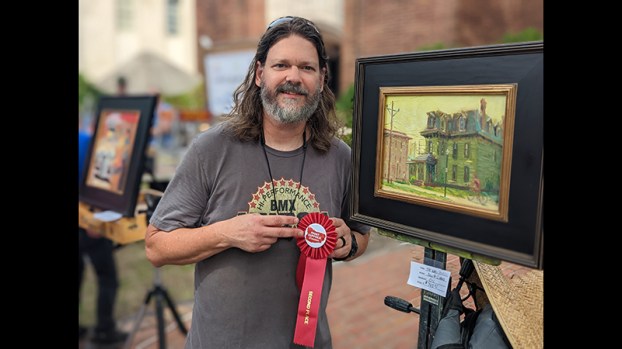 Doug Clarke of Norfolk stands next to his painting, “The Neighborhood,” which took second place during Saturday’s Quick Draw competition, the final event in the Plein Air Festival and held in conjunction with the Taste of Suffolk. 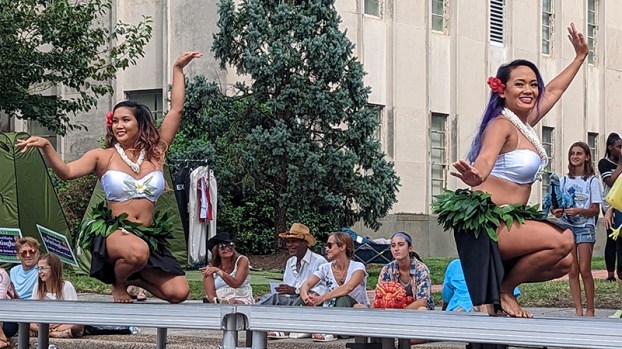 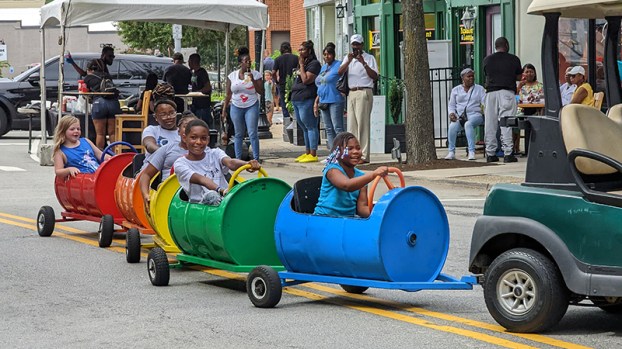 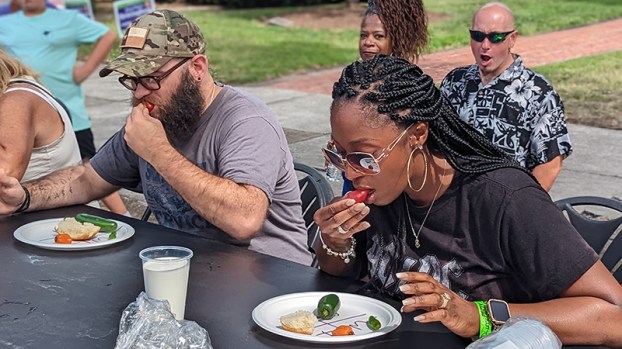 Crowds of people filled North Main and West Washington streets Saturday to fill their stomachs during the 16th Taste of Suffolk, sampling food from about 20 restaurants.

Music from several stages provided the backdrop as artists also converged downtown for the final day of the six-day Plein Art Festival, culminating in a quick draw art contest as people put Suffolk scenes to canvas.

Those who were into craft beer had an area for themselves to lounge on couches, watch college football in the courtyard area downtown, listen to live music and observe artist Chip Wilkinson, with help from Tammy Hinkle, repaint the Main Street mural he painted 20 years earlier.

Some, like Felipe Conejo, decided to test their mettle in the hot pepper eating contest, eating his the fastest among the five contestants before downing some milk.

“After I finished the habanero, it hit my tongue and then I was like, on fire,” Conejo said.

The milk sitting next to his plate didn’t tempt him because “I didn’t want to lose,” he said with a chuckle.

The local restaurants were doing brisk business up and down both streets, as lines were prevalent throughout the afternoon.

And the artists were all over the scene, too.

In conjunction with the Taste of Suffolk, the Suffolk Plein Air Festival hosted a Quick Draw event, with 46 artists — youth and adults alike — getting two hours to paint a scene within the Taste of Suffolk boundaries, with the works of participants available to buy afterward.

Kirk Larsen of Hicksville, New York, took third place in the adult Quick Draw event with his painting, “Main Street Boogie,” depicting the festival scene, which included Rowan Ellis of Virginia Beach, who walked around the festival on stilts. Larsen also received an honorable mention during Friday’s Plein Air Festival awards ceremony for his painting, “Whatever Floats Your Boat.”

“I had fun this time,” Clarke said. “It doesn’t always work out in two hours. Sometimes you get an hour in and have to start over. You can’t always hit home runs.”

Dimitris Voyiazoglou, originally from Athens, Greece but now living in The Hague, Netherlands, said he wanted to return to the United States to paint a small American town and chose to come this year to Suffolk for the festival. He went to graduate school at Michigan State University in the 1980s to study chemistry. He created several paintings and sold six while in Suffolk. He was in the city throughout the week for the entirety of the festival.

“I wanted to get back to the states,” Voyiazoglou said. “I paint a lot in Holland, and I said, ‘why not do a Plein Air Festival?’”

The 2022 Plein Air Festival, which featured more than 40 artists from Suffolk, Hampton Roads and other parts of the United States, and included Voyaizoglou from the Netherlands, took place across the city as artists painted outdoors. The painting, ‘Hard at Work’ by Lyudmila Tamova, was named best in show.

Voyiazoglou plans to return again next year, and, judging by the volumes of people imbibing on craft beer, vibing to music and diving into hometown food, plenty of others will return, too.