Riddick’s Folly curator welcomes 1770 dress back to the museum 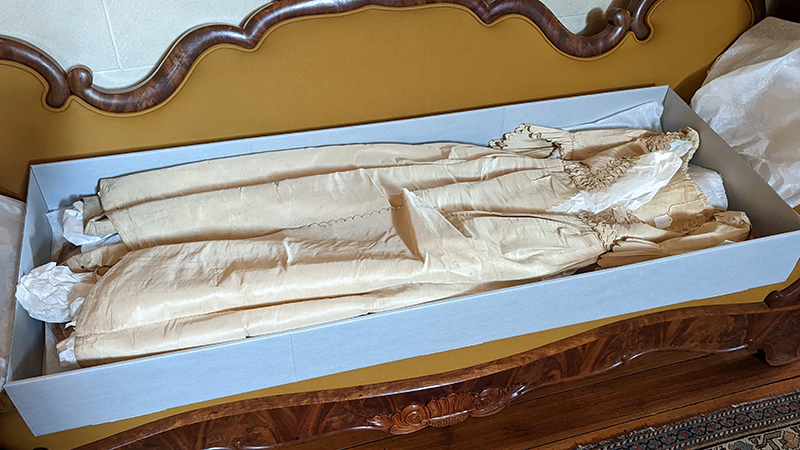 For the past 15 years, Riddick’s Folly House Museum has had to do with a photograph and a cutout of the 1770 wedding dress Ann Willis wore when she married Josiah Henry Riddick a year later.

But as museum curator and director Lee King said, it has come home.

“The dress has landed,” King said.

The 252-year-old dress came home last week as Nichol Gabor, curator of costumes and textiles at The Valentine, a museum dedicated to Richmond’s history, made the drive south to Suffolk and handed it off to King, who said he hopes to be able to put the dress on display by the end of the month.

King said he has a dress form on the way so he can display it in the museum, but to help preserve the silk dress, he won’t have it on display all the time. Rather, he will rotate the cutout of the dress that is currently on display.

King had the cutout of the dress made from a photo that someone at The Valentine had previously sent to him — the photo being of Anna Withers Rollings and Rosa Etheredge Withers, descendants of Mills and Mary Taylor Riddick of Riddick’s Folly, with the dress. He had taken the photo and cropped the head off of it and had it blown up life-size so that people could stand in the Riddick exhibit and have their photo taken with it.

Gabor noted that the dresses of that era “were meant to last you for ages.”

King said he and his wife had driven up to The Valentine about 12 years ago to see the dress, and he has been working even longer to have the dress come back to Riddick’s Folly.

Willis was born in 1752 and married Josiah Henry Riddick in 1771 and wore the dress, King said. Willis’ sister, Christian Riddick, who was born seven years after Willis, wore the same dress in 1780 when she married Archibald Richardson in Suffolk.

Riddick’s Folly is the four-story, 21-room Greek Revival-style house on North Main Street built in 1837 by Mills Riddick, grandson of Revolutionary War hero Col. Willis S. Riddick. It was dubbed Riddick’s Folly after many people thought Mills Riddick was a fool for building a home so big that they felt would never be able to stand.

The home was later used as a headquarters for Union commander Maj. Gen. John J. Peck during the Civil War, and Riddick descendants lived in the home until 1967, when the house and grounds were sold to Nansemond County and then became a museum in 1977.

“I think they’ve got more pieces that belong to us,” King said.

When he gives tours of the museum to visitors, King usually tries to stand in front of the dress cutout so they cannot see it until it is time for him to say something about trying to get it back.

Soon, he won’t have to tell them that, but he’ll still stand in front of the real thing, but he’ll have something different to say when he moves aside to reveal the dress.