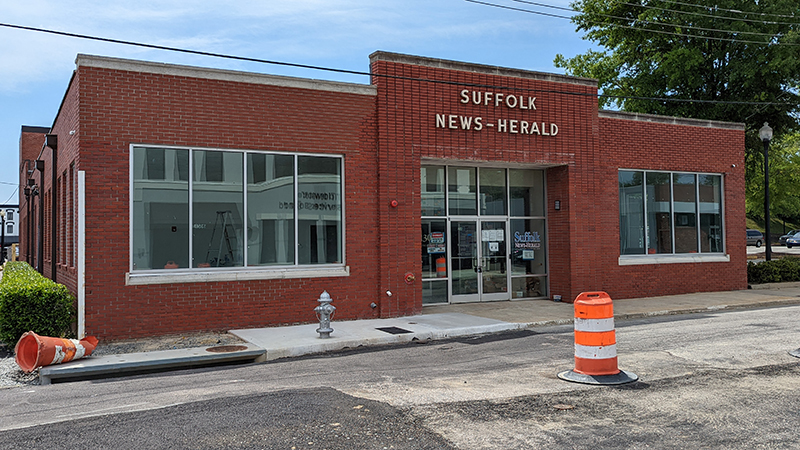 The developer who purchased the former Suffolk News-Herald building, shown here in May of this year, is nearing completion on the construction of 14 apartments at 130 S. Saratoga St. It asked for, and received, an extension by the Economic Development Authority board, to its façade grant.

The apartments being built in the former Suffolk News-Herald building on South Saratoga Street will take just a little bit longer, but an official for the project developer said they should be finished by mid-October.

Krysta Ivey, project manager for the Monument Companies, said in an email to the city’s Economic Development Department that “due to supply chain issues as well as Dominion Power delays, the project has taken longer than anticipated. We now expect the project to be completed no later than Oct. 15, 2022.”

As a result, the company asked for an extension of its business façade improvement program application for the 14 apartments at 130 S. Saratoga St. until that date. The apartments are part of an adaptive reuse project for the three-story building along with 434 feet of ground floor commercial space and 434 feet for a lobby.

The EDA’s board approved a $10,000 façade grant in August 2021 to help defray some of the $44,558 cost to make roof and masonry repairs, as well as install new windows, improve the entry into the building and put in a new front door, and put in new front signage.

At its Sept. 14 meeting, the EDA board voted 7-0 to approve extending the grant.

Monument Development bought the building, which had been damaged in the 2020 tornado that ripped through the downtown area, last year for $300,000.

The Knight Finance building on the corner of Washington and Saratoga streets, which had included apartments on the upper floors, and the former Brandon House Furniture store located on West Washington, also sustained significant damage due to the tornado and have since been torn down after the city purchased those properties.

They will make up much of the city’s new Festival Park project, which is expected to be ready by next summer.

The city also is working on building a new downtown library on land on West Washington Street between Lee and South streets.