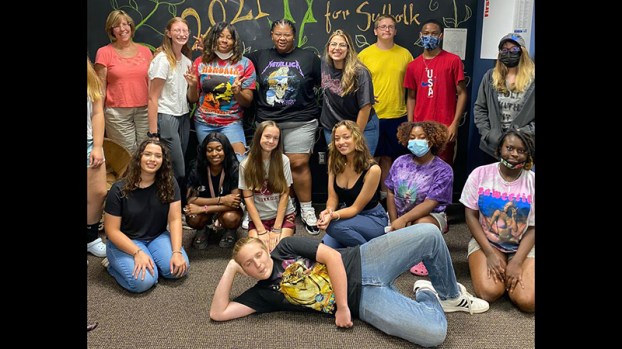 Interns selected for 2022, pictured above, learn a variety of skills in the the Hope for Suffolk program, providing them with experience they can use as they pursue their careers. Among those pictured is Ari Cheeks, who was once an intern and has returned as a CSA manager and team leader. She knows about the tedious upkeep required for a small farm. “My involvement helped me learn to farm, and it also helped with my personal development,” Cheeks said. “I learned how to better handle conflict with myself and others, and I learned workplace readiness skills. It’s helped prepare me for better jobs and helped me become a more well-rounded person.” 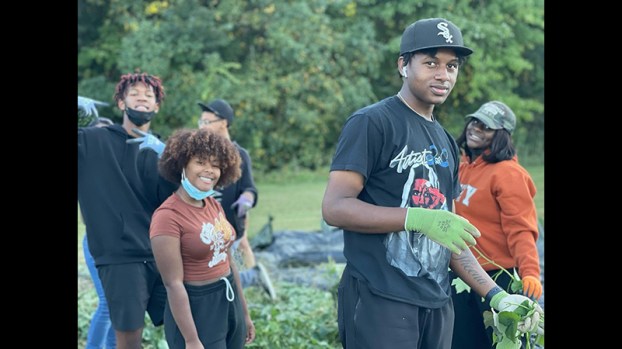 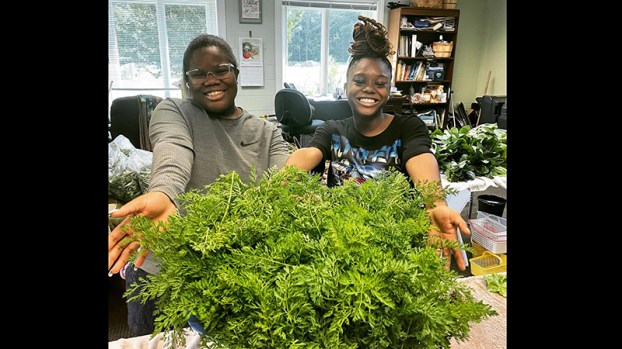 Hope for Suffolk is helping the city’s youth learn and grow. As part of Westminster Reformed Presbyterian Church, the farm work program provides the city’s teens a faith-based space to participate and work together.

Program Manager Nyasia Johnson and Intern Caleb Willliams spoke about the organization as well as their own work, the internship program process and the upcoming Harvest Festival.

Johnson explained the non-profit organization’s mission and what it provides for interns.

“The mission of Hope for Suffolk, it comes from our leaders’ background in poverty alleviation. So years ago, Hope for Suffolk was geared towards adults who were struggling to find a job and things of that nature. and as things changed, we realized that we should work with youth. Hope for Suffolk is unique for many reasons, but I like to point out the fact that it’s a Christian-based organization and it provides our interns with a paid job as well as training and development that they can use as soon as they get it.”

Johnson went on to provide more detail about the internship program and what parents and their teens need to know in order to participate.

“Our internship runs from March into October, so kind of towards December that’s when we’ll start saying ‘hey, we’re hiring.’ Our main thing is as long as you are 15 and older and you are willing to work outside, we can help. …If you meet those two quotas, around December, definitely start looking at our social media on Facebook and Instagram — Hope for Suffolk — and also our website, which is where the application can be found.”

Likewise, Johnson pointed to the benefits of those who complete the internship.

“Fun fact about the program is students who complete our internship or internship like ours, they go off to make 3% higher than their peers,” she said.

Williams described what it’s like being an intern for Hope for Suffolk and what day to day work is like.

“We come in, we get ready, work starts at 3:30 p.m., so we go outside and we get a briefing, he said. “We start off with something like a devotion, so Nyasia usually will come out there and talk to us, give us a spiel about encouragement, like a pep talk first for the work day. And then our farm manager Sarah, she will give us a list of what our tasks are for the day, what we do and what needs to get done for that day.”

Williams said the interns then get to work, taking care of their personal two rows. “We just kind of check in to see what else needs done and it’s really just basics like weeding… packaging and producing,” he said.

Johnson said her planning duties as the program manager are a big part of her job, along with the daily support she brings to the interns.

“For me as a program manager, a work day… it kind of starts off with me preparing what my spiel is and so that’s normally me talking to God and just asking him what should I say or where should I go today,” she said. “After that, around that time, the interns are starting to come in so I like to talk to them, just see how their day is going so far, with school being back seeing how that’s going.”

Johnson said the work day then normally begins a few minutes after this.

“During the work day, I’m not outside as much as our farm manager and our director,” she said. “I’m normally either doing paperwork or planning for Harvest Festival or doing payroll and things of that nature.”

The day ends with Johnson making announcements. “They kind of differ between what we have going on or what season we are in,” she said.

Johnson said another big part of the organization is its upcoming Harvest Festival from 2-6 p.m. Oct. 1.

“Our Harvest Festival is a community-wide event. When our director was thinking about Hope for Suffolk and what it would look like, she wanted to kind of end the season in a high environment and just giving our interns the opportunity to be a part of something community-wide,” Johnson said. “So basically, I get insight from my interns like ‘What do people like at festivals?’ like ‘What do we want to eat? What do we want to have?’ and so from there, I kind of put their comments that put legs to it to kind of get it going.”

She said the interns work the many stations they have set up during the Harvest Festival.

“So, we have five bounce houses and we would have interns who are referees. For free food, we have cotton candy and popcorn and snow cones, our interns would be working there and things of that nature,” Johnson said.

She also gave additional details for those attending and looking to join the festival.

“For people who are looking to come, it’s very open. It’s here at our site, which is at Westminster Church on 3488 Godwin Boulevard and we just ask for individual donations of $5 and if you’re coming with your family you can bring $10 and that would be fine.”

Williams recalled how he enjoyed his experience with the festival.

“I was there for the last one and it was fun,” he said. “We had tons of stuff — things to do for all ages like games, food, vendors, stuff like that. And there’s also going to be the graduation ceremony for the interns.”

Key points on the program

There are important things both of them believe the community should know about Hope for Suffolk.

Williams pointed to how it starts anyone for their career path.

“It’s a great boost into pretty much whatever you want to do,” he said. “I feel like the program itself can just help you branch out into whatever career path, life goal you’re trying to achieve. And it also does great at getting you out there and meeting new people.”

Johnson is impressed with how the organization provides a close family atmosphere.

“It’s one of those programs that you can’t really explain it until you experience it,” she said. “I tell the interns all the time when I was applying for this job, I was nervous. I was like ‘I don’t want to be the program manager of a farm program.’ But it’s so much more than that. And from the staff to the interns that we have, we become a family. Having interns from so many different backgrounds and so many differences, when you spend almost eight or nine months with the person or a group of people, you build a bond.”

For details on the program and its activities, go to hopeforsuffolk.org.