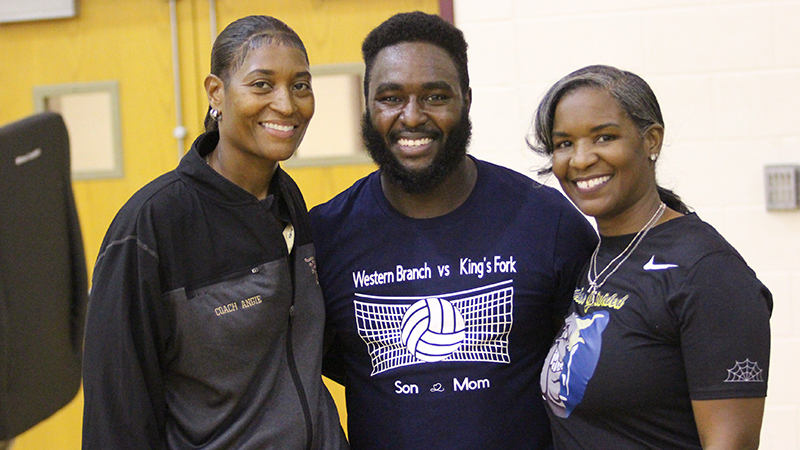 Mother vows to take win in next game against her son

A family affair that would pass as a reunion of sorts took place Sept. 15 in the gymnasium at King’s Fork High School in Suffolk.

As Leary’s squad competed against his mom’s team, which just so happens to be his alma mater, he knew it was not the typical volleyball match on a Thursday night.

“To see a mother and son play against each other, especially after coaching at the school last year and being an assistant for them the past 6-7 years, it was amazing,” said Leary, a King’s Fork alum who went on to play volleyball at Bluefield College.

“She taught me everything I know, so I had to use it against her,” Leary said. “The atmosphere here was crazy. The energy from the crowd, both sides, all of our family that was here, it made it special. It was different, but it was a blessing.”

For King’s Fork, it was their first loss of the season, dropping to 3-1 overall following wins over Nansemond River, Manor and Deep Creek. However, this was a game that was circled well before September.

“After we got the schedule, our girls have been ready for this game for months  It was very emotional,” Gatling said.

“I don’t know if they felt like because he used to be here with us that they were intimidated, nervous or scared. Our girls definitely played hard, but we just didn’t quite perform at the level I wanted them to play at the end.”

To lead King’s Fork, East Carolina signee Aulie Huff made several spectacular plays during the match, tabulating at least 20 points over the four sets. That included consecutive kills during their 25-20 victory in the second set.

“She’s my captain and a key part of this team,” Gatling acknowledged. “I told her that she did her job as a captain and we’ve got to play them again.”

One of King’s Fork’s top players, setter Lynn Weist, battled through injury and with her at full strength the Bulldogs felt the outcome might’ve been in their favor.

“A lot of her sets were not where they could’ve been or needed to be because she literally played on a rolled ankle,” Gatling said.

The win pushed Western Branch above the .500 mark at 3-2 overall.  Leary was glad to get the leg up for family bragging rights, but knows they’ll have to see the Bulldogs again before the playoffs.

“Since she lost the first one, I know she’s coming for me again,” said Leary, who also was playing against his step-mom in Angie Gatling, head coach of the King’s Fork boys volleyball team and assistant for the girls.

King’s Fork will get another crack at Western Branch when they have the re-match Oct. 18 in Chesapeake. Gatling doesn’t plan on losing to her son twice in the same season.

“Oh gosh, no,” Gatling said. “This was just chapter one. We definitely are coming for a lot of payback. It’s a learning point and experience to get their emotions together and be able to play against anybody because I know they can. I think we’ll be better the next time.”