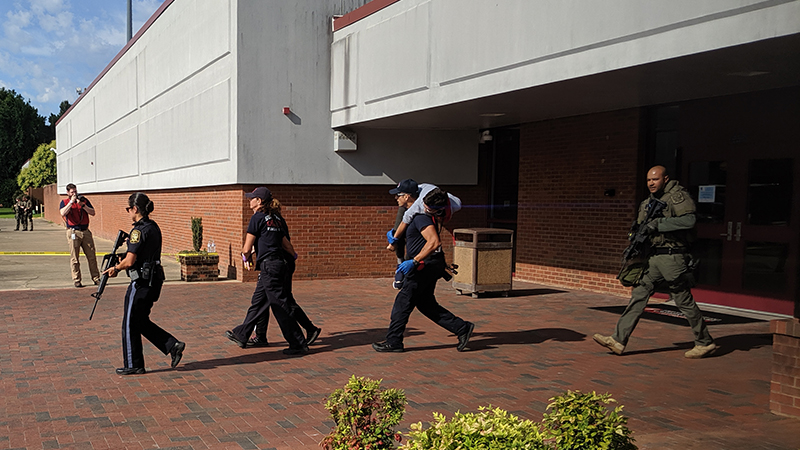 Suffolk Police and Suffolk Public Schools have outlined training for active shooter incidents in the wake of a school shooting in Uvalde, Texas. Here, multiple city and regional agencies trained in a 2019 active shooter exercise at the College and Career Academy at Pruden.

However, some council members, including Mayor Mike Duman, wanted to know more about what is happening at the school division level, and whether its staff has been trained and is adequately prepared.

Buie, who briefed council at its Sept. 7 meeting, said that, as of Sept. 7, Suffolk Police has taught 18 civilian active shooter classes to various city departments and would continue to do so for the rest of the year. It also teaches this class to any business, churches or any other business. It simply asks for people to put in a speaker request to the Suffolk Police Department. Buie said it has fulfilled 100% of requests, and does so free.

Following the May 31, 2019 mass shooting at the Virginia Beach Municipal Center, Suffolk Police also completed an assessment of all city facilities.

He said the department has worked with division administrators on their plans, and it has been in the division’s schools familiarizing itself with their respective layouts, as it has done with city buildings.

Councilman Roger Fawcett asked about how often Suffolk Police had been to schools. Buie noted that the principals of the city’s public schools were on hand during summer active shooter training at Col. Fred Cherry Middle School.

Fawcett asked whether teachers are getting such training and whether the entire division has had the training.

“If anybody has the delusion in their mind that this couldn’t happen in my backyard, we need to get out of that mode real quick,” Fawcett said.

The following day at the School Board’s monthly meeting, Superintendent Dr. John B. Gordon III said the division is adequately prepared and is continuing with active shooter training. He said this took place at all schools during the summer.

While acknowledging criticism of the division’s plans, he was critical of those who believe it is not taking such training seriously.

“Now, you all have heard me say from day one it is always going to be about safety here in Suffolk Public Schools,” Gordon said. “And it’s something that I’ll never be able to shake because I was involved in an active shooter (incident) in 1998, Armstrong High School, Richmond, Virginia. I saved Greg Carter ‘s life, who got shot. So for anyone to ever make the assumption that the school division, this administration, this School Board, does not care about the safety of our students and our staff, it’s a lie. It’s a lie.”

He said the division would continue “to do everything that we can to ensure that we are putting safety first.”

Carter was a colleague of Gordon’s when they both worked at Armstrong High School.

The threat of an active shooter was amplified Monday when Booker T. Washington Elementary School, along with other schools in the Hampton Roads region, received what turned out to be the same false threat.

“Law enforcement acted quickly and was immediately on site to check the building alongside Suffolk Fire & Rescue,” Gordon said in a Sept. 19 letter emailed to families of children in Suffolk Public Schools. “Students remained on a code red until Suffolk Police Department determined the building was clear and the threat was not credible. Members of our crisis support team will be available tomorrow as a resource for students and staff at BTWES.

“Local news media brought to our attention that several schools across our region received the same false threat. Officials confirmed that 911 dispatch received calls of an active shooter threat in Chesapeake, Newport News, Norfolk and Virginia Beach public school divisions. Authorities are still investigating the source of the false 911 calls.”

Gordon stressed that the school division takes any threat against its schools seriously and urged parents to discuss with their children the repercussions of sharing false or misleading information, and noted that even a prank 911 call is a criminal offense and anyone found to have done so can face “serious consequences” according to its student code of conduct.

School resource officers also recently went through specialized training, Buie said, to prepare for what to do if such an incident takes place.

The division also is planning a large-scale active shooter exercise in the next couple months in conjunction with the city and its first responders, Gordon said.

While urging people to be responsible with their firearms – locking them up and keeping them away from children – he said the division has purchased metal detectors that it will deploy at some schools as part of a pilot program.

Lockdown drills also take place multiple times yearly in schools, Gordon said, and he noted students and staff are prepared in the event of an active shooter incident.

He said, too, that administrators have access to all the cameras inside each school, but also noted that the division would not fully outline every step it is taking so as not to tip off those who might be considering acts of violence.

Gordon said the division has strong partnerships with Suffolk Police and the Suffolk Sheriff’s Office, with officers out front helping at their schools, and even moving from secondary schools to elementary schools in the mornings and afternoons.

“That’s the camaraderie and collaboration that we’re talking about,” Gordon said.