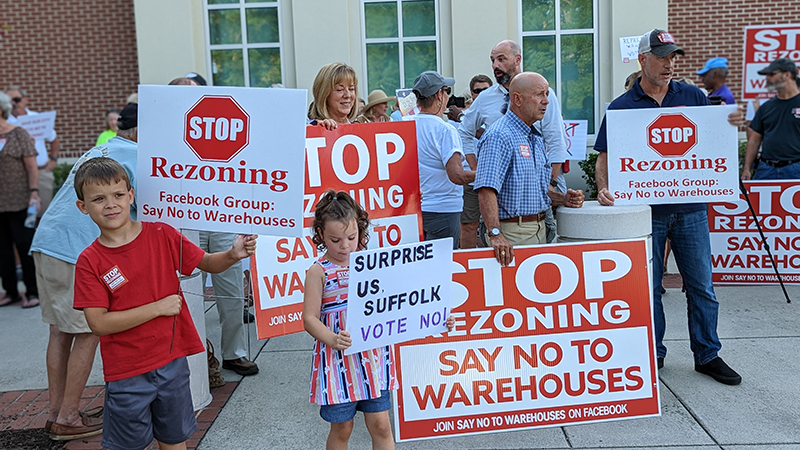 Opponents of the 540-acre Port 460 Logistics Center project off of U.S. Route 460 say they will continue to fight against the project despite City Council’s 5-3 vote Wednesday to approve the rezoning for it.

Opponents of rezoning for the Port 460 Logistics Center were vowing to continue to fight to put a stop to it even before City Council’s vote approving the plan for 10 new warehouses on property off U.S. 460.

Council voted 5-3 to allow for the rezoning of the 540 acres of property from general commercial and agricultural to heavy industrial zoning for the property that also borders U.S. 58 and Pitchkettle, Kings Fork and Murphys Mill Roads.

“As many of you have pointed out, there has never been as much outcry about an issue in Suffolk than we have seen in the past few months,” said Denise Murden, who addressed council following Wednesday’s vote. “There is still much to do, and while you voted yes tonight, the citizens are not done. We will use every opportunity we have to stop or slow down the construction of the monstrosity that you approved tonight without really hearing what we said.”

She was among the local residents who had rallied against the project outside City Hall between council’s work session and regular meeting.

With signs and chants that called for council to “surprise us Suffolk,” there was a sense by many opponents that the vote would be in favor of the rezoning.

Public Works Director Robert Lewis noted ahead of the vote the needed road work from the U.S. Route 58/460 interchange to Lake Prince Road to support the project, with $8.6 million committed to the design work for it.

Lewis said “the developer is committed that within a matter of days, he’ll begin the survey work, which is the very basis for everything we’ve got to do, and shortly thereafter get the rest of the funds and go into hard engineering.”

A timeline presented to council outlined survey work to begin in November, with engineering to begin next spring. It estimated that 90% of the design work would be completed by spring 2024. At 90% design, Lewis noted it would provide “the optimal opportunity” for the city to compete for state and federal money for construction.

Matan Companies, the applicant for the project, submitted a joint permit application June 27 for federal and state environmental permits. The Army Corps of Engineers published a public notice announcing that the Norfolk District commander had received it, and the application has also been filed with the Virginia Marine Resources Commission, the state Department of Environmental Quality and the Local Wetlands Boards.

The Army Corps of Engineers has said the decision to issue a permit “will be based on an evaluation of the probable impact including cumulative impacts of the proposed activity on the public interest.”

It took comments on the application until Sept. 5.

The project, designed to be in proximity and to support the Port of Virginia, would have 18 wet retention stormwater management ponds, a potable water supply tower, two sanitary sewer pump stations, access roads, employee parking and trailer storage areas.

The Army Corps application states that the company has proposed developing the project in two phases, and has requested a 15-year permit to ensure full-site development. The application also states the project has been set up to avoid higher quality onsite wetlands and focus development on existing farmland areas.