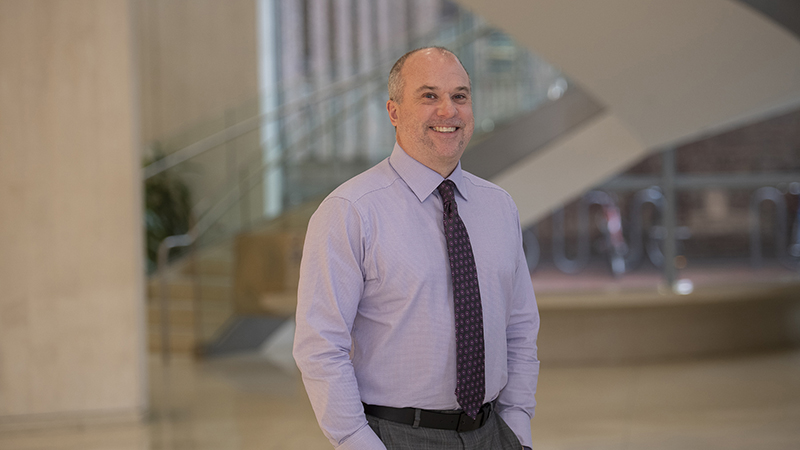 Like his predecessor at Virginia Commonwealth University, Chris Woleben, a Suffolk native, is dedicated to helping students succeed, particularly through the Residency Match process.

Which is why it’s so very appropriate that he’s been named the inaugural appointee to the Hugo R. Seibel Teaching Professorship.

The professorship carries the name of the perennial alumni favorite and former associate dean for student activities who was known for shepherding students through their four years on campus, from the anatomy lab through Match.

Upon his retirement in 2004, the generous Seibel wanted to ensure that teaching excellence in the medical school would be preserved and rewarded, even in the face of increasing demands for faculty to become ever more productive in research and clinical endeavors. To this end, he made a significant lead commitment of $100,000 toward the $250,000 needed to endow a professorship. And in celebration of his more than 30-year tenure in the medical school, former students and colleagues joined him in the effort to reward and inspire outstanding teachers.

In a news release from VCU, officials said it is particularly fitting that the first teaching professorship ever established at the school bears the name of Seibel, who passed away in 2020. And equally fitting that its inaugural holder is Woleben — who first met Seibel during his medical school interview and later relied on him for guidance during the Match process.

“He got me into medical school, and he helped me get out as well,” Woleben said. “This is a tremendous honor.”

‘A tireless champion of our learners’

Today, 25 years later, Woleben has gone on to earn national accolades for his own commitment to students. In 2021, he was one of just four nationwide recipients of the Careers in Medicine Excellence in Medical Student Career Advising Awards from the Association of American Medical Colleges.

A pediatric emergency medicine physician who also serves as associate dean for student affairs, he was honored as “a tireless champion of our learners and … for his accessibility and willingness to help, even outside of the typical channels,” according to the association.

During his 15 years in the Office of Student Affairs, Woleben has helped thousands of VCU students by developing innovative programs and strategies to support them throughout their medical school journeys.

He built out a longitudinal career development curriculum and established a nationally known stoplight program to identify and support at-risk students, which uses an algorithm to categorize students into their predicted chances of a successful residency match.

“It starts during orientation first year,” Woleben said in the release. “Getting them starting to think a little bit about their professional identity within the field, learning how they work together in teams, how their personality type might play into different specialties that they choose, providing them with lots of information on how the Match process works.”

VCU’s graduates frequently match through the National Resident Matching Program at a higher rate than the national average due in no small part to the work of Woleben and his colleagues. Several years ago, the AAMC sought Woleben’s help in translating that success to other medical schools across the country. A survey he created for fourth-year students is now part of the association’s toolkit, and as chair of the national advisory committee for the Electronic Residency Application Service, he wants to make the interview process smoother and more equitable for both students and programs.

Students have described Woleben as a great role model and a lifelong friend who is personally invested in everyone, despite having nearly 200 students moving through the Match process each year.

“I really found a passion for helping people develop their professional identity,” Woleben says. “It’s just something that’s personally interesting to me and rewarding when I see a student who maybe struggled at some point, and they’re able to match into a great program and they’re happy with the outcome. Those are the things that make this job really rewarding.”

Family members living in Suffolk said Woleben was a student at  Nansemond Suffolk Academy, and got his first job in the late 1980s as North Suffolk reporter for the Suffolk News Herald.