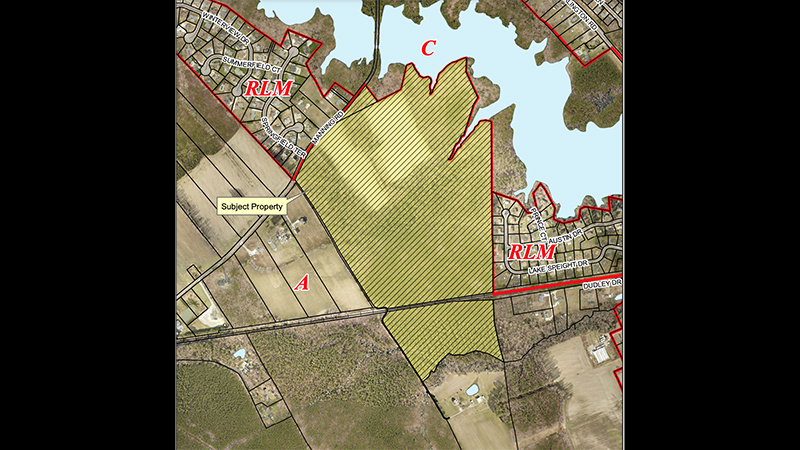 A developer has proposed building up to 300 single-family detached homes off of Manning Road near the busy U.S. 58/Holland Road corridor in the midst of a 3.1-mile construction project. A public hearing was scheduled for the Sept. 20 Planning Commission meeting, but it was tabled for 30 days.

A developer proposing to build up to 300 single-family homes on 114 acres off of Manning Road near U.S. 58 had a recently-scheduled public hearing delayed to provide time to adjust proffers for it.

That intersection is in the area of the current 3.1 mile widening project in the U.S. 58/Holland Road corridor designed to improve traffic flow and make it safer.

The public hearing on the proposed rezoning of the Ellis Farm property from agricultural to residential low-medium density zoning was scheduled for the Sept. 20 Planning Commission, but the developer, Bob Arnette of Manning Road Development Group LLC, asked for it to be tabled for 30 days.

Commission Chairman Arthur Singleton said this would give time for the developer and the community surrounding the proposed project time to meet with one another and allow the developer to bring a new proposal back to the commission.

The commission voted 8-0 to table the public hearing, and it is now scheduled for the Oct. 18 commission meeting.

“Obviously, this is going to be a very unpopular thing,” said current commissioner and City Council candidate John Rector, “but since there’s proposed potential changes that the developer might be willing to offer to this thing, and in the interest of hearing what is going to actually be presented, I will make a motion to table this for 30 days.”

The property, at 494 Manning Rd., about a half-mile south of U.S. 58, is bisected by a railroad, and though there are no plans to build on the land south of the railroad, both sections of the property are part of the rezoning request. In the narrative of proposed uses for the project, the developer also noted plans to add amenities such as parks, common area open spaces and a walking trail. It is also bordered by residential zoned properties to the east and south, and agricultural property to the north. Several hundred feet of property borders Lake Kilby, with the city of Portsmouth owning lengths of shoreline.

The gross density of the property is 2.8 units per acre, which the staff report on the project notes is within the recommended density for the suburban use district, and the requested zoning and the proffered number of homes “are found to be compatible with the surrounding development use patterns.”

It has also proffered more than $3.1 million to mitigate student impacts at the middle and elementary school level — $1.9 million for elementary school students and $1.2 million for middle school students — since those schools do not have adequate capacity. The developer expects a net-generation of 53 students to Kilby Shores Elementary School, 29 to Forest Glen Middle School and 39 to Lakeland High School.

In outlining reasons why the rezoning for the project should be approved, the developer said the new homes would be compatible with the city’s existing zoning, its focused growth theme and its policy of efficient land use. It also noted that about 75% of the city’s housing stock is more than 25 years old.

“As the city has provided assistance in bringing business and jobs to the city,” the developer states, “we are seeking to satisfy the parallel demand for housing this influx of taxpayers.”

The maximum of 300 single-family detached homes are also proffered, along with

city planning staff have recommended approval of the rezoning request.

Commissioner Oliver Creekmor said he had not had adequate time to process the packet of information on the rezoning request.

“I have not had, and nor has anyone else here,” Creekmore said, “had an opportunity to review these documents.”