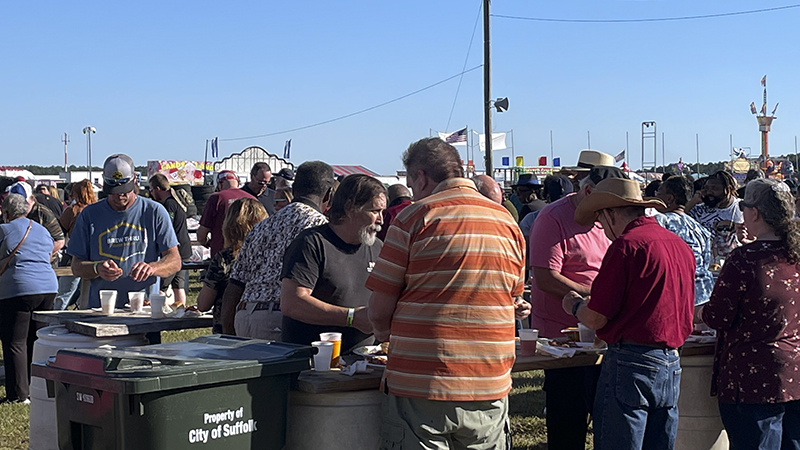 Sheriff Everett E.C. Harris, who is chairman of the Ruritan Club’s Shrimp Feast, said the proceeds from the event support a variety of local charities.

“The Shrimp Feast is the kick off normally for the Peanut Festival,” Harris said.

Harris noted the difficulties caused by the pandemic in the past few years might have contributed to decision to limit the number of people served.

“I don’t know why folks don’t get out as much, I guess now and with COVID and the economy. So it’s hard sometimes to get out. So we do about 2,000 tickets a year.”

Harris also noted how the Shrimp Feast continues to raise funds to help a lot of charitable organizations in the city.

“Every penny that’s made in profit goes back out into the community probably to between $35,000 and 50,000 a year,” Harris said. “It’s goes to Meal on Wheels, Salvation Army, Boy Scouts, Girl Scouts, Sickle Cell Anemia… we’ll donate to Golden State Foods so they can buy the bicycles for the kids, Marine’s Toys for Tots, the Cheer Fund, we send boys and girls to Boys State and Girls State… and the list goes on.”

As Shrimp Feast chairman, Everett said a lot of planning and community cooperation helps make the festivities a success.

“The shrimp feast starts the day after the last shrimp feast. It’s just a year long to get planned,” he said.

Lastly, Harris had a message for the Suffolk community who attended the festival.

“First of all, I want to say thank you to all of them because every penny that we profit, what we buy to put it on, goes back into the Suffolk community. So we appreciate that because they’re helping folks. And that’s the bottom line is helping folks,” he said. “It’s a good kick-off thing for the Peanut Festival.”

He said the Suffolk Ruritan Club wants to see the Peanut Festival do well every year and they’re glad to be the kick off for it.