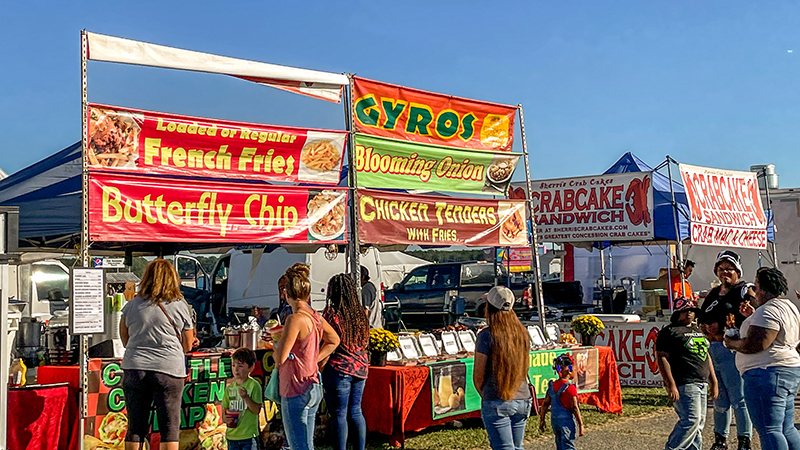 Theresa Earles, publicity coordinator for the event and the city’s tourism development manager, estimated that at least 100,000 people attended the four-day event, including about 40,000 just on Saturday. She said it was the largest she’s seen in her 20 years associated with the festival, and possibly as big as any crowd it has had in its 44 years.

The result, on Saturday in particular, was traffic that moved at a snail’s pace, if at all, at times, along Carolina Road and adjacent routes as it took many four to five hours, or more, to work their way to the festival grounds at the Suffolk Executive Airport.

Around midday Saturday, traffic backed up for at least three miles on Carolina Road, and traffic on other roads also backed up as people sought other routes to the festival site.

Still, most people in the traffic inching along Carolina Road appeared to stick it out and make their way to the festival.

“It definitely was a struggle,” Earles said. “The sheer volume of cars trying to get into the site is the main issue, and then there were people using their apps to find alternate routes.”

Festival organizers, she said, are already working to prevent such an issue from happening at next year’s festival.

“I think, and I’m not an expert on parking, on traffic, please understand,” Earles said, “I think that we will, of course, be discussing this in the future and trying to find, perhaps, methods that can streamline the entrance points a little bit better.”

Anecdotally, Earles said she heard of backups resulting from people waiting for other people to leave their parking spots rather than continuing to an already-empty spot.

“We’ll just have to work on controlling the parking patterns and the flow of traffic next year,” Earles said, “and of course, we learned a lot of lessons and we are really disappointed for the people who were stuck in traffic, and some people turned around. That’s never what you want to leave the public with. We want everyone to have a good time.”

It was the reason the festival stayed open an extra hour Saturday, until 11 p.m., to accommodate those who arrived later due to the traffic.

“That’s one of the biggest messages, is that we really appreciate the patience of the people who waited for so long,” Earles said, “and the fact that they didn’t give up on us and they committed to coming to Peanut Fest, we just really appreciate that. Not every event has that luxury of having people so willing to dedicate their entire day, and we’re grateful to them and we hope that they’ll come back next year.”

A confluence of events, she believes, led to the large crowds, especially Saturday. They included ideal weather conditions, the Tunnel to Towers 9/11 Mobile Exhibit — “perhaps reached an audience that may not usually consider coming to Peanut Fest that wanted to have the opportunity to tour the museum” — four days of carnival rides, concerts and festival food, family-friendly free activities and more. There were also discounted, or free admission, for certain groups or at certain times during the festival.

Lines were more than 50-deep for funnel cakes and some of the attractions even in the evening Saturday, and plenty of people were still on hand to watch performances from the Crazy X Band and A1A Jimmy Buffett Tribute Band on the Main Stage, and the United States Air Force Heritage of America Band on the Peanut Stage before the fireworks began just after 9 p.m.

Saturday saw the traditional peanut butter sculpting contest, the Kids’ Power Derby and the Demolition Derby.
Many other things were available throughout the weekend, and the Goober Gang, made up of students, handed out 13,000 nine-ounce cups of Birdsong peanuts during the festival.

In a typical year, the festival might see about 60,000 people total. Saturday’s total, alone, was like four days wrapped into one, Earles said, with some food vendors running out of products before the end of the day.

She said they’ve talked about possibly setting up shuttle buses to the festival site but they haven’t explored it yet. Still, the goal is to ensure the traffic issues of this year’s festival do not happen again.

“The last thing we want to do is turn people away,” Earles said. “We want people to have the best-possible experience and for their families to experience Peanut Fest and make it a tradition and come back every year. So definitely, we’re going to work on that.”

She hopes people will understand that the festival has just two part-time employees and about 200 volunteers who are instrumental in making it happen.

In her 20 year association with the festival, Earles said she has never seen it packed like this year. She said 20 years ago, people might have had to wait an hour to get in, but it was nothing compared to Saturday.

“Imagine trying to have four days worth of traffic into one day,” Earles said. “We were bound to have some backups. We will certainly investigate and work with our police and our traffic engineers and try to figure out what the best method is. It’s one of those things you don’t really know how to address it until it happens.”