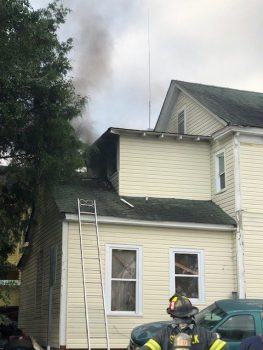 Smoke can be seen coming from the two-story home on Pine Street in downtown when Suffolk Fire and Rescue arrived on the scene Friday morning. 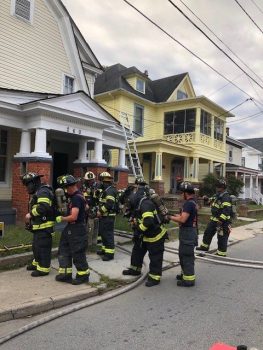 Firefighters gear up to enter the home as they work to contain the fire that was determined to be caused by someone cooking in the second floor apartment. 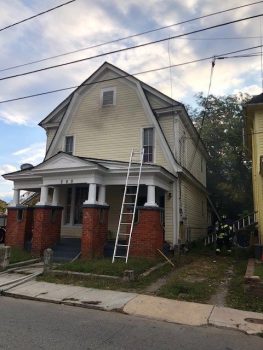 Firefighters carry a ladder to the side of the home as they battle the fire Friday morning.

A Friday morning kitchen fire damaged a home in the 200 block of Pine Street in downtown, displacing five people who lived in two apartments at the location.

Suffolk Fire and Rescue was dispatched at 8:16 a.m. Friday, Oct. 14 with six units arriving on the scene at 8:18 a.m. to find smoke showing from a two and a half story residential home that was converted into two apartments, according to a news release.

Several adults were outside the structure and three adults were still in the first floor apartment, officials said in the release.  Firefighters initiated an aggressive interior fire attack and performed a search of the structure.

The three adults on the first floor were escorted out of their apartment as firefighters found a fire on the second floor apartment in the kitchen area of the building.

One adult female was evaluated at the scene for injuries related to the fire, but was not transported to the hospital, fire and rescue officials said. All searches were completed and the fire was extinguished. No firefighters were injured.

The fire was placed under control at 8:34 a.m.. according to the release. The American Red Cross is assisting all five adults from both the second floor and first apartments, as they were displaced by the fire.

The cause and origin of the fire was investigated by the Suffolk Fire Marshal’s Office and the fire was determined to be accidental related to cooking.

In all, 14 units from Suffolk Fire and Rescue and the city’s fire marshal’s office responded to the call.