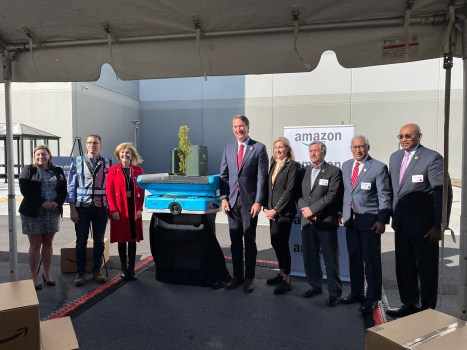 Governor Youngkin is joinged by Amazon officials and those from the city for a group photo before taking a tour of the new Suffolk facility, above. (James Robinson photo/Suffolk News-Herald) 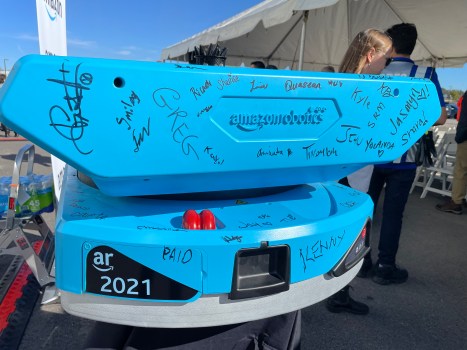 To mark the occasion, they took a moment to autograph an Amazon robot. 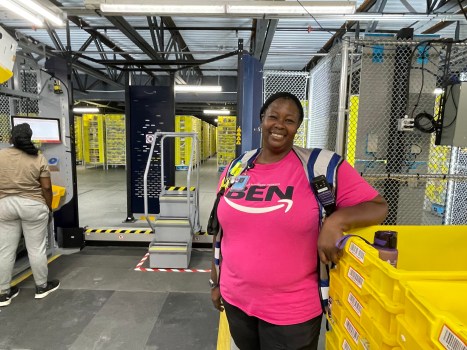 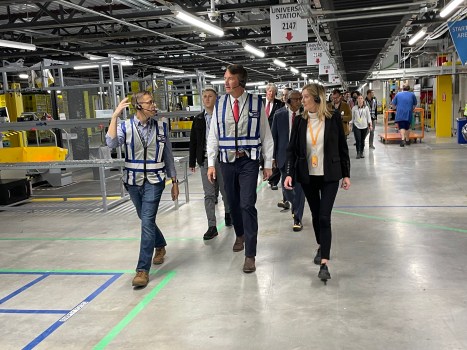 Amazon officials and City Council members gathered alongside Gov. Glenn Youngkin Thursday to celebrate the grand opening of Suffolk’s Amazon Robotics Fulfillment Center.
The new Suffolk facility is notable for being 3.8 million square feet and is the second largest building in the state of Virginia.
The grand opening included a press conference, music by the Nansemond River High School band, and a facility tour that explored the robotics technology that employees use to better enhance Amazon customer service. It also brought Amazon Vice President of Worldwide Economic Development and Public Policy Holly Sullivan and Suffolk Fulfillment Center General Manager of Operations Gregory Lum to town for the special event.
Gov. Youngkin spoke at the Thursday morning press conference alongside City Mayor Michael Duman, VP Sullivan, and Suffolk Fulfillment Center General Manager of Operations Gregory Lum to emphasize the importance of the new Amazon facility – from its use of technology, to promotion of new jobs for the city of Suffolk.
“Today we have a chance to peek inside the amazing capabilities that drive Amazon’s ability to provide extraordinary customer service, to provide state of the art access and opportunities to customers,” Youngkin said. “What this represents is an opportunity to step back and not think about the size, the scale and the scope of this amazing facility. But to think about that moment, when those two words are uttered. 1,500 people – ‘you’re hired.’ 1,500 families. When someone gets hired, it’s not just an individual, it’s family.”
The governor said there are no greater words, other than when a loved one says “I do” when they ask you to marry them, than when they hear those words, “you’re hired.”
“Let’s just think through this, 1,500 great jobs, right here. Opportunity,” Youngkin said. “The ability to pursue dreams, the ability to support families comprehensively, and I just want to thank Amazon for thinking about not just how to hire people, but how to give them a career and how to make sure they have a fulfilling life.”
Sullivan explained Amazon’s investment in Virginia.
“Our presence in Virginia means more than just those great jobs with full benefits provided within the fulfillment center’s four walls,” Sullivan said. “We’ve invested more than $34 billion dollars across the state in fulfillment and cloud infrastructure through compensation towards our thousands of our employees.”
Those investments, she said, have helped create more than 96,000 indirect jobs and other trade in services such as logistics and construction.
Mayor Duman also took the time to thank those who support the Amazon project and to express how the facility will benefit the city’s future.
“As you can imagine, our city code never envisioned a 90 foot tall, 3.8 million square foot robotics fulfillment center,” he said. “In addition, I would like to thank our plan reviewers, building officials, and fire marshall who took on this challenging task and worked diligently to get us to where we are today.”
Duman said the city is thankful for the company’s monumental success, the economic impact through job creation and generated tax revenue will be significant for years to come.
“We are indeed fortunate to welcome a corporate partner of this caliber to this part of our community,” he said. “As mayor of this diverse and dynamic city, I am often reminded how far we have come and how far we have yet to go.”
Lum, a Virginia Military Institute alum, former member of the Virginia National Guard, and commissioned as a logistics officer, then discussed the importance of his employees and development of new jobs in the city of Suffolk.
“Each day, our employees play an integral role in delivering smiles to our customers and they work in concert with our operation colleagues at the cross-dock fulfillment center in Chesapeake, just down the road, and delivery stations in Hampton, Norfolk, and Chesapeake,” Lum said.Once the Suffolk operation launched last month, Lum said it created more than 1,500 new, full-time jobs here.
“Amazonians who work here make an average starting rate of over $16 an hour and we’re proud to offer compensation packages to our frontline employees that not only include good pay, but also provide comprehensive benefits on day one for all of these regular full-time employees,” he said.
Lum also provided details to the benefits that Amazon employees receive for their work during the conference.
“Benefits include health, vision, and dental insurance from day one. A 401K plan with 50% company match, up to 20 weeks of paid leave, which includes 14 weeks of pregnancy, related disability leave or six weeks of parental leave,” he said. Additionally, there’s a mental health benefit that supports their workers and their families.
“We believe so strongly in investing in the long term success of our employees and the communities in which we operate.”
During the conference, Lum also announced that Amazon will be making a monetary donation to the Nansemond River High School band to thank them for coming out for the celebration.

Facility Tour
Lum provided a tour of the Suffolk facility, known in Amazon as ORF3, with Sullivan and Youngkin. It offered an in-depth look at the robotics and equipment that local Amazon employees use in their work to provide packaging and distribution to their customers.
L5 Area Manager Tamya Crawford discussed her history of with working with Amazon and the opportunities she received
“I started with Amazon in 2011 at the facility in Pennsylvania and came home because Virginia is home,” Crawford said. “Grew up in Charlottesville, so I came home because my mom is here and she kept having medical issues… five hours versus an hour and a half is a much better drive.”
She said she started off as a tier one, helping to launch the building in Chester, launched another building in Prince George in 2020, and then joined this team as a L5 manager to help launch this building.
“I started as an hourly associate, came to the building in Richmond also as an hourly associate, promoted to the process assistant which is basically my right hand as a manager,” Crawford said. “This is the person that is taking care of and helping to manage the hundreds of people that we have on her shift. Promoted to area manager June of 2020, so I’ve not been in the role for a very long time, hung out as a tier 3 for a very long time, it was great.”
She said she loves the people, the interaction and the opportunities of working with Amazon.
Likewise, Crawford also spoke to those who want to have Amazon as a first step into their career.
“It’s not easy work, but it’s rewarding,” she said. “It’s absolutely rewarding. As an entry level associate, being able to come in and within your first month, be able to start training in different career paths.”
Amazon’s Career Choice program offers workers many opportunities within the company and for those looking to earn a degree.
“Amazon is paying for a lot of stuff now, so if I decided that this was not what I wanted to do and I wanted to drive the trucks, we have our TOM (transportation operations management) team,” Crawford said. “We have so many different avenues to pursue opportunities with Amazon at this point. And even if I didn’t even want to stay here in Virginia and I wanted to go somewhere else, we’re launching buildings every year.”
She said she gets to travel and see the world.
“You really could almost transfer to another building if you wanted to be in California, or you wanted to go to New York, or North Carolina is where you want to be,” she said. “We have places that would be open arms and ready for you to come and help out with those facilities.”