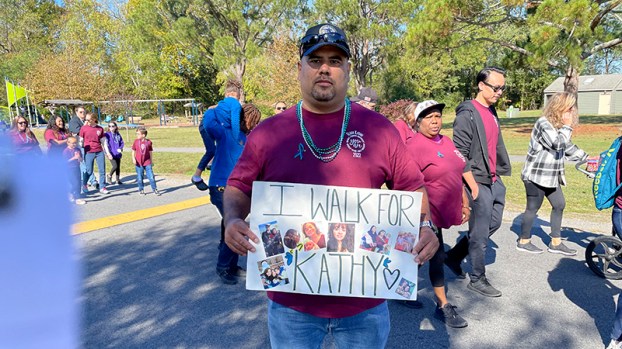 Out of the Darkness Walk Participant Robert Avila shares a sign of Kathy. 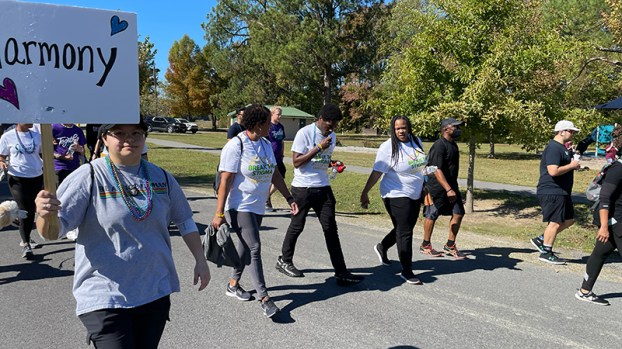 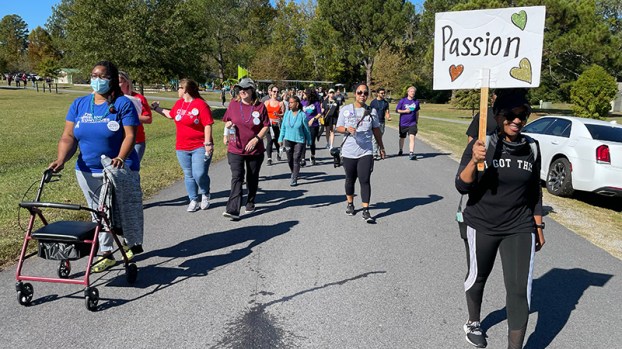 Walkers come together to walk for those lost to suicide. 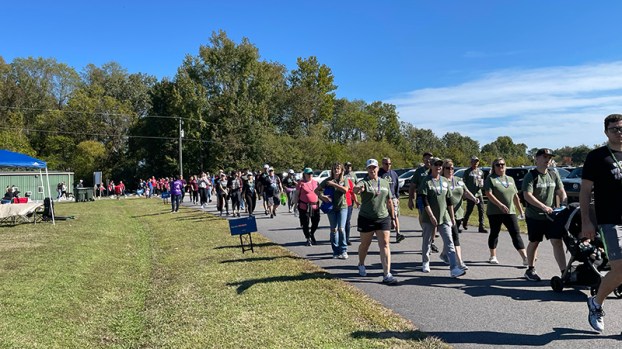 Suffolk citizens raised more than $34,000 Saturday at this year’s Out of the Darkness community walk to raise awareness for suicide prevention.

Sponsored by the American Foundation for Suicide Prevention, the event at Bennett’s Creek Park is held to honor loved ones lost to suicide and to promote mental health awareness.

The sixth annual event started with an opening ceremony followed by the five lap walk that honored the five core values of AFSP — passion, community, harmony, impact and wellbeing. The 37 teams with 284 participants raised a total of $34,055.11 by the end of the walk.

Along with a salute to arms from Namesend River High School and an opening prayer, the walk opened with remarks from Brooks and Lowther, as well as with a Honor Bead Ceremony for those affected by suicide and those who struggle with it.

“Despite the challenges of the past several years, AFSP continued our mission to save lives and bring hope to those affected by suicide, which would not be possible without you,” Brook said. “Because of your support, we see in communities across the state, families were supported, volunteers were trained, education was presented, organizing the Suffolk Out of the Darkness community walk, and reaching out to help those who struggle are all testaments to the dedication of AFSP and all the volunteers.”

Mental health advocate, suicide survivor, and Run for the 132 Fundraiser creator Colin Lowther, 23-year-old college student,  spoke about the importance of having the conversation of suicide.

“I can promise you guys that I will never suggest to any of you to run a 100 miles to raise money for suicide prevention,” Lowther said. “I do challenge all of you to continue the conversation that we’re starting here today.”

He said it is through these conversations that society will be able to end the stigma surrounding suicide once and for all.

After the walk, citizens connected with others and stopped by local vendors with information to help bring mental health awareness.

Brooks took the time to speak at the end of the walk to share how the loss of her son, Steven DeHaven, brought her to the AFSP.

“15 years ago, I lost my son Steven to suicide, he was 25,” Brooks said. “And my family and I attended the walk in Washington, D.C., where we could honor him and his memory and then we decided that our own community needed awareness. So we organized our walk in our community.”

She said risk factors were probably present for her son, as they most likely are for everyone.

“Whether they struggled or had depression or anxiety, they’re probably there,” Brooks said. “It’s just that I wasn’t educated at the time to notice them. As a mom, your kid is perfect and you don’t see those things. They’re just an average kid…”

She explained she didn’t recognize those kinds of things, adding that is because he hid it well.

Brooks stressed the importance of education on mental health and having more awareness to see the signs.

“By educating myself to recognize signs, to not be afraid to say to someone, ‘Hey, are you ok?’ even ask the question, ‘are you thinking about suicide?’ I’m not afraid to do that now where I would never have thought to do that 13 years ago,” she said. “So, I feel like I’ve educated myself to be more mindful and aware of what people could be going through.”

Walk Co-Chair Logan Crews shared how she lost her grandfather to suicide.

“I lost my grandfather when I was 14-years-old,” Crews said. “I lost him to suicide and he was a veteran and just… ended up that he was part of that statisic.”

Crews also spoke about why we find it so difficult to talk about suicide and also that people should not feel demoralized for asking for help.

Crews said her grandfather was 74 years old, and he didn’t seek help and it wasn’t talked about when he died.

“It was very hush-hush how he passed away,” she said.

Crews went on to say there is nothing wrong with seeking help.

Swinson said she walks to change things for my children’s future and the future generation.

“I have three children and they’re already feeling the effects in their high school and middle school careers, so I like it to be different for them,” she said.

Swinson explained why people find it difficult to talk about suicide.

“I think generations before us created this stigma that they were ashamed, and that is my goal is that it is not a shameful thing,” she said. “That mental health is something that we all struggle and being honest about it helps others to listen to your story and sharing your own story can encourage others.”

U.S. Navy Petty Officer Second Class Ponder discussed the connection that brought him to the walk.

“My hometown best friend’s family has an organization called ‘Burgers and Bands’ and they work with the AFSP to host local bands to come and all the proceeds go to getting mental health like access accessible to the community,” he said.

Ponder then explained why people find it difficult to have a conversation about suicide.

“It’s something that’s taboo and it’s really hard. When you’ve hit the point of wanting to die, it’s very hard to talk about, he said. “It’s something that you don’t really want to involve your family and friends necessarily because you know it affects them and it’s hard to tell someone that you love that you’re going through such a hard time.”

Ponder said he believes bringing these organizations together and bringing the community together will open up that conversation. “‘Hey, we can talk about this, you can come to me when you’re hurting’ and getting the resources out there and the people who are supportive,” he said.

Also participating in the event was the family of 18-year-old Charles Nicholas Wright, who they lost to suicide. Alongside Wright’s mother was his aunt, Jennifer Beamon, who spoke out about what happened to her nephew.

“Nicholas was suffering depression that we really didn’t know about. And his suicide was really a shock to all of us,” Beamon said.

“His mother got the phone call while she was at work that she needed to come home from the sheriff’s department and Nicholas had committed suicide.”

Beamon spoke further about the tragedy.

“When she got home the police and the ambulance were at her home, her and Shane’s home, his stepfather, and he had…expired,” Beamon said.

“He felt like the world had no joy in it,” said Nicholas’ mother. “That’s what he wrote to us. And he told me that he loved me and that he would suffer the least this way… he took his self out so he could stop suffering.”

Nicholas’ mother spoke tearfully sharing how intelligent her son was. “He would solve problems for himself and it bothers me so badly that he couldn’t find a solution to this,”she said.

“He did not feel worthy,” said Beamon.

Wright’s mother shared stories of some of the hobbies that her son loved.

“He loved to go fishing and he loved his dogs,” she said. “He loved to be outside in the woods, which is where he was when he died.”

“And he loved his mama,” said Beamon.

The families of loved ones lost to suicide shared their thoughts for other families facing similar situations after Saturday’s Out of the Darkness walk. In offering their advice, they hope to help others intervene before it is too late.

Winter Brooks: “You’re not alone. I would reach out. AFSP has many programs for those survivors of suicide loss. They have Healing Conversations where when you lose someone to suicide, you can register at afsp.org/healing-conversations. It is a peer to peer conversation with someone with a similar loss. I would connect, support each other, reach out, self-care, that’s another thing self care, and eventually you might be where you want to volunteer, you might get to on your healing journey where… for me this is part of my healing journey. To be the voice of Steven is how my role as Steven’s mom has not ended. This allows me to continue my role as Steven’s mom. And I think that for anyone else, whether you lost a friend, or sibling, or a husband, or whatever. But to be the voice is how our roles as their person doesn’t end.”

Logan Crews: “Get involved in this community. This community is great, they’ve become a second family to me and that type of community just lets you know it’s ok. And what you’re going through you’re not alone. It’s all about community.”

Jenny Swinson: “One, seek help. 988 hotline is there and they are trained professionals to answer and talk to them through that. Two, don’t be ashamed. Tell a friend. Tell a loved one. And if you are a loved one and you think someone is having those thoughts, ask them. Ask them if they are ok, ask them if they are thinking of suicide, because you are not going to create the thought of suicide just by mentioning it. If it’s already there, they’re waiting for someone one to reach out to them.”

Henry Ponder: “I normally look toward tomorrow, that’s kind of my motto. What would your best day be if you didn’t have it before it? You have not had your best day yet. It does get better. Imagine the best day that you’ve ever had — if you die before then, you wouldn’t have that day. So, kind of just living to that expectation of there’s always going to be a tomorrow and you should have that tomorrow because you want to have that good day. You want to be with your family and friends, because they will miss you.”

Wright’s mother: “To not stay silent. To just talk to somebody and try to find somebody to talk to and open up to so that you can get help. There is help. It’s not the end of the world. This too shall pass. It’s not going to be like this forever…. Give yourself a chance. He did not give himself a chance to get past whatever it was.”

Jennifer Beamon: “…You are worthy, you are important, you are loved. That is very important that you remember that because it is true. I mean, people need to remember that by themselves… and they forget.”