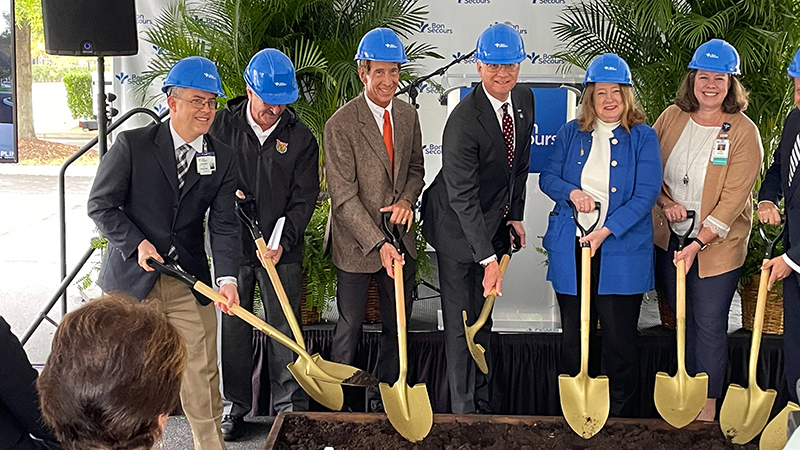 Officials from Bon Secours and the city joined to break ground for the new hospital the company is building Harbour View.

Officials from Bon Secours and the city joined to break ground the new hospital the company is building in Suffolk at 5818 Harbour View Boulevard.

Complete with their golden shovels, the company leaders and city officials dug into the ground and tossed the first dirt to kick off construction of the 98,000 square-foot facility.

“This project has a long history and has been in the works for many years,” Davis-Hagens said. “So I am thrilled to be a part of the milestone with all of you and I look forward to bringing this project to fruition for the northern Suffolk and western Hampton Road communities.”

Built as a 98,000 square foot addition, it will join the company’s existing services already at the Harbour View medical campus to offer a comprehensive medical facility.

“As such, we’ll be able to interbrand our established free-standing emergency department, imaging center,and lab into this new hospital,” she told those gathered for the ground breaking. “The approximately $80 million hospital is surgically focused with up to four operation rooms and 18 medical surgical beds. This means people looking for elective procedures will have access to care close to home.”

“On the behalf of the city of Suffolk, I want to thank Bon Secours for your continued investment in our great city,” Duman said. “This investment and that commitment will be instrumental in providing exceptional healthcare options to our residents for years to come.”

Bon Secours Health System Vice President of Operations Andy Spicknall and Bon Secours Director of Public Relations Emma Swann spoke about the importance of the new hospital and their mission to provide care for the Harbour View community.

“It’s an exciting day for Bon Secours and more importantly, for our community,” Spicknall said at the event. “Our mission at Bon Secours is to bring good health to those in need and we’re excited to continue that mission, expanding services for our patients and our community.”

Both Spicknall and Swann spoke about their mission to provide health services for local residents.

“It’s a privilege to take care of our patients in their community, so we’re excited to expand our services and to be able to deliver high quality care in their community and a place where our community can heal and bring wellness to this Harbour View northern Suffolk community,” Spicknall said.

Swann said that providing care for the community is key.

“As some of our speakers said, they won’t have to travel distances to hospitals, they’ll have critical care right here where they live,” Swann said.

When the speakers were finished talking about the new hospital, Bon Secours Hampton Roads Board of Directors Chairman Will Pile closed the ceremony with officials gathering for a celebratory photo with golden shovels.