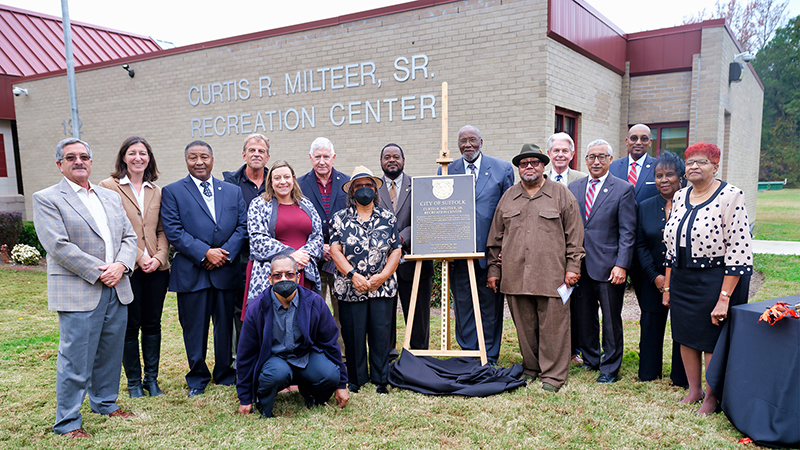 The center, operated by Suffolk Parks and Recreation at 132 Robertson St. was dedicated during a Friday ceremony as the Curtis R. Milteer Sr. Recreation Center in honor of the longtime city council member.

Milteer, who died Jan. 31, at the age of 91, served as the representative for Whaleyville Borough on the Suffolk City Council for 40 years after being elected to 10 consecutive terms.

Milteer’s family and distinguished guests participated in the unveiling of a new plaque that will be mounted on the entryway of the building Friday, Oct. 28.

“Everybody knows my father, and what he was about…” said Anthony Milteer at the ceremony. “But I would also like to thank the City of Suffolk and the Whaleyville Borough for giving him 40 years of public service.”

The city’s Mayor Michael Duman spoke of his time working with Milteer.

“I had the good fortune to serve with him, and beside him, for the last decade of his illustrious career,” Duman said. “Curtis Milteer was known for his unparalleled dedication to, and advocacy for his constituents. That representation served him well and directly attributed to him being elected to an unprecedented 10 consecutive terms.”

The mayor said Milteer recognized the need for recreation and enrichment opportunities in the Whaleyville community and lobbied to ensure that the former Robertson Elementary School would be repurposed for that need.”