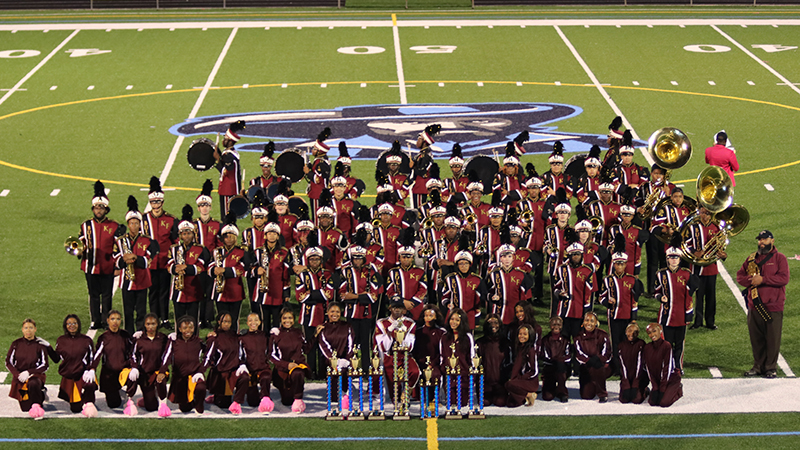 Bradley notes that many different areas of the band, such as drumline, majorette, and dance team members are each awarded for their contributions.

Bernard C. Bradley is celebrating the achievements of his band students at King’s Fork High School. It’s been a great year for the KFHS band as they earned 26 top honors through four major competitions, bringing a total of 30 awards home to their school.

For Bradley, his 13 years at King’s Fork, 10 of those as director of bands, has been a wonderful experience.

“I fill a lot of different hats here. I tend to write 95% of the music that the band plays, I choreograph most of the moves that the band does on the field, I also teach classes — beginning band classes, intermediate level band classes, advanced classes,” Bradley said.

He said KFHS also has a concert ensemble, plus a variety of different small ensembles throughout the program.

“So, it’s not just a marching band,” he said. “We really pride ourselves in having a complete music program here at King’s Fork.”

“It’s difficult, because it’s like a lot of practicing you gotta do with other kids. New kids come in every year and they might not have the technique. It really takes practice to teach them and give them the right discipline, the consistency and stuff,” Riddick explained of his work in drumline.

Owens called the process of preparing rigorous. “But it’s enjoyable and we have fun doing it,” he said.

Easton then noted that all the work work does pay off in the long run.

“Like in the end, the result of it, you get a bunch of new friends. You basically have a whole entire family around you.”

The band members also spoke on what brought them to the high school band.

“So he (Bradley) over here has this thing where students that aren’t a part of the band have an ‘experience week.’ I did that, and that’s what made me join,” Easton said.

Phillips said he decided to join the band based on his love of music, noting that Mr. Bradley asked him to join over and over again.

For Owens, it was the way to improve his skills.

“I joined because I wanted to get better at my instrument and I thought this was a good way to help me improve,” Owens said.

Bradley took the time to highlight the various accomplishments that the band has achieved during the year.

“We participated in four different band competitions this year. One at I.C. Norcom High School, one at Hopewell High School closer to Central Virginia, followed by a performance at Highland Springs High School, from my neck of the woods Henrico, and finishing off most recently down the street at Lakeland High School,” Bradley said. “Throughout the course of those four different competitions, the band achieved 30 different awards presented to them — 26 of those being either first place or what we call ‘grand champion’ awards where the band was the highest scoring band at all of the respective events we’ve performed at this year.”

Likewise, Bradley emphasized how many areas of the band have received awards based on their efforts.

Bradley emphasized that without his staff and auxiliary coordinator Devonte Arrington, none of these achievements would have been possible.

“He’s also a former student of the Kings Fork High School band as well, formerly serving as a saxophone player and a drum major,” Bradley explained. “So, for him to come back as an alumni to come back and serve with the program, he’s done outstanding work again and again. This year would definitely have not has gone as smoothly without his support this year.”

Bradley shared his immense pride in his students and their work.

Bradley said the band members have done their work and what they needed to do to make King’s Fork have a name out there when it comes to music.