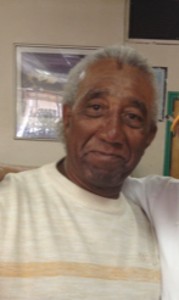 Once graduating from high school he left Holland and moved to Jersey City where he lived for more than 50 years. John became a city boy and he loved Jersey City. In 2002, he suffered a hemorrhagic stroke which left him in a coma for weeks. Upon his recovery, he had to learn how to walk and talk. His daughter, Valorie, was there every second to make sure he learned these things. She traveled every weekend after getting off work during the week to see and teach her Daddy, as she called him, these things. She wrote words on index cards, she had newspapers delivered to him and she made him get up and keep trying to walk until he got it. She had this mission for her daddy because in two months she was being deployed to Iraq. Before she departed for Iraq John was walking. She put him in a nursing home in Jersey City while she was gone and he stayed there for five years until it was no longer medically necessary. Valorie went and got her daddy and brought him to Virginia with her.

During recovery, his sister-in-law, Ruth Edward, made a trip to Jersey City with Valorie. She visited with John because Valorie knew how powerful her aunt’s prayers were. Ruth got to see John and she performed one of those powerful prayers. John and Valorie said she saved him. John became a new creation, he was literally born again. God transformed him from the street life of Jersey City to a born again servant of the Lord. He not only talked about it but he walked the path of a true saint. Always happy, humble, patient, showed how much he loved you and didn’t speak a negative word no matter what happened to him or came his way. He always wanted to help no matter the job he said I can do it let me help! John would always say I’m doing great, I’m PERFECT. John was a special one-of-a-kind. God spared his life many times in order to do the job God had for him to do. He always faced the challenges no matter what and with not one complaint. Those who had the privilege of knowing him are witnesses to his faith in God and how God made him a new man. John had a deep love for all his family and friends. His love was genuine, and he showed it. He was a faithful member of Holland Mission United Church of Christ.

A viewing is from 4 to 7 p.m. Wednesday, Nov. 9, at Peebles Funeral Home. A celebration of life takes place at noon, Thursday, Nov. 10, at Holland Mission United Church of Christ Holland. Interment follows at St. Matthews Cemetery in Holland. Professional Services entrusted to Peebles Funeral Home, Suffolk. Condolences may be registered at Peeblesfh.com.