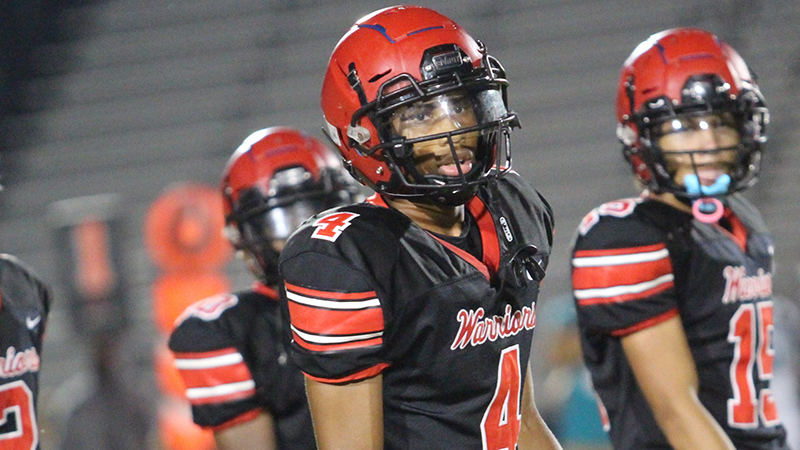 Junior receiver/defensive back Jayden Bradley hauled in the game-tying touchdown pass from 11 yards out in the fourth quarter and then made the tackle on a two-point conversion try for the Bulldogs that decided the outcome in overtime.

When Nansemond River coach Alonzo Ricks Jr. woke up on Friday morning, Nov. 4, he knew his team would erase a double-digit deficit against city rival King’s Fork and go on to claim the Suffolk City Championship, right?

“Absolutely not,” laughed Ricks.  Never could have imagined that.”

Some who witnessed it are still in disbelief as the Warriors, playing what the schedule deemed as a “home” game at King’s Fork’s field because their own is still having artificial turf installed, rallied from 14-0 down in the third quarter to shock the Bulldogs, 21-20 in overtime.

“I knew it was going to be different and a difficult situation to endure, but they never wavered or got down. They stuck together like we’ve been teaching them,” Ricks added.  “Our guys police each other and found a way.  We talk all the time about persevering and you have to be resilient.  We’re so grateful to get the win.”

Stepping in crunch time with enormous plays was junior receiver/defensive back Jayden Bradley, who hauled in the game-tying touchdown pass from 11 yards out in the fourth quarter and then made the tackle on a two-point conversion try for the Bulldogs that decided the outcome in overtime.

“He’s a ball-player as well as a great young man inside the building and out.  He asked for those moments and answered the call,” Ricks said. “Offensively, he made a heck of a grab on a great thrown ball by our quarterback Alkendric Overton to put us in that situation.  Defensively, he made an incredible play.  I’m really proud of that young man.”

Two months ago, Nansemond River was on the other end of a comeback, coughing up a 17-14 half-time lead to Indian River in a 27-17 loss that looking back was a turning point and lesson. What was different this time?

“Matching the enthusiasm and the intensity,” Ricks answered.

“I never brought back up that Indian River second half, but it’s been in the back of our minds and resonating in us since Sept. 23. We talked about what we needed to do. We had to execute plays no matter what was called or what situation we were in. We basically couldn’t have plays off or mental lapses to allow a good team like that to score or capitalize on us. We talked from being on the field to on the sideline, keep each other uplifted and be there for one another.”

It paid off as Overton had a hand in all three touchdowns, including two of the rushing variety, and the Warriors a key onside kick in the process of their comeback.

“Getting the stops on third down and fourth down, plus executing those third and fourth downs on offense as well as doing the special teams things we harp on in teaching, that was big,” Ricks said.  “They’ve been in these moments [and] played against quality competition all year.”

An unsung hero in the victory was Dallas Slaughter, who converted all three of his extra point tries on a night when King’s Fork went one for three on two-point conversion tries.  Slaughter has drilled an area-high six field goals along with a long of 42 yards.

“We had a moment in the gym when we got back where we embraced. I told him I was grateful to have him because it means so much. He won the game for us in a lot of ways. When we score touchdowns or get in the area to, we don’t hesitate. We know the type of young man he is, the leg he has, those big boys up front are going to block, Seth Murphy is going to get the snap, and Terrell Douglas is going to put it down for Dallas to do what he does. It works together like clockwork,” Ricks said.

“I also give a plug out to our punter Noah McClee. I think he’s the best punter in the area. He pinned them back deep and gave us great change of field position punting the ball. It really helped out. You have to be fundamentally sound in all three phases of the game.”

It wasn’t a pretty start, trailing 25-14 at the half in Charlottesville against St. Anne’s-Belfield, but the Nansemond-Suffolk Academy Saints rallied for a 40-37 victory in the regular season finale.

“It definitely was not the way we wanted to start the game, but I’m glad we woke up in the second half and I’m proud of our guys for not allowing the regular season to end on a low note,” said NSA coach Mike Biehl.

Wansart completed 22 of 46 passes for 322 yards and five touchdowns with only one interception, plus rushed for 43 yards and a score.

One of eight different receivers who caught a ball for NSA, Fuhrmann finished with nine receptions for 94 yards and two touchdowns.

Next up, NSA will host Atlantic Shores – the reigning VISAA Division II State Champs – in the opening round of the playoffs on Nov.10.

Even though NSA won the previous regular season encounter 27-7 in late September, the stakes are much higher this time around in their quest to win a title.

“I know we didn’t start at the level we’re capable of, but it’s always a positive to come away with a win. We’re going to clean some things up and move on to Atlantic Shores so we can put our best foot forward,” Biehl said.