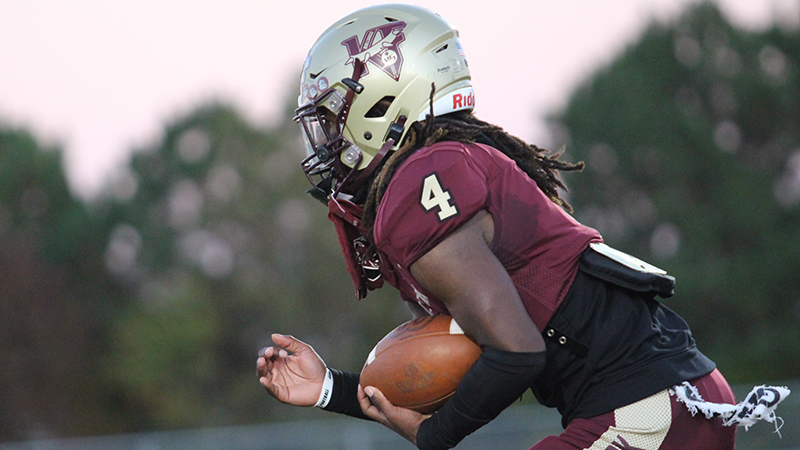 JaVon Ford of King's Fork takes off with the ball moving it for the Bulldogs’ offense.

Even though King’s Fork won the regular season matchup over Deep Creek, 35-14, Oct. 7 in Suffolk, Coach Anthony Joffrion recognized a rematch with the Hornets in the playoffs would be no easy task.

That’s what the Bulldogs were facing Nov. 10 when the visiting Hornets rolled in for a Region 4A quarterfinal.

With 9:06 to go in the contest, Deep Creek held a 14-10 lead. However, with 2:39 left, the Bulldogs nudged ahead and moments later got their second defensive touchdown of the night to hold off a dangerous and familiar Southeastern District opponent, 24-14.

“Our guys did a great job of overcoming adversity,” Joffrion said. “That wasn’t a typical No. 7 seed. Deep Creek is a really well-coached team. It was a hard-fought win and we came through in a big way in the fourth quarter. I was proud of the way we responded.”

Kaletri Boyd got the first defensive score for the Bulldogs with a pick-six, his fifth interception of the season and second returned for points. Yet in a battle of two of the best sophomore running backs in Hampton Roads – JaVon Ford for King’s Fork and Brandon Nesbit for Deep Creek – the Hornets were able to control the clock and field position for much of the night.

“Brandon Nesbit had a very big game for them on offense, defense and special teams. There wasn’t a play where he went off the field,” Joffrion said.

“Deep Creek responded to whatever we did to them, and Coach [Andre] Twine does a terrific job with his program  On offense, they utilized their skill guys, and defensively they did a lot to try to contain JaVon.”

The game was tied at 7-apiece at half-time and the Bulldogs didn’t take a lead until a field goal four seconds into the final period.

Down four points with under five minutes to play, things were looking mighty bleak, particularly considering that King’s Fork was without senior starting quarterback Cameron Butler, out from the concussion he sustained in the second quarter of the regular season finale against Nansemond River. By falling in overtime to the Warriors, it cost King’s Fork home-field advantage through the regional playoffs and bumped them down to the No. 2 seed.

“It was terrible to see,” Joffrion said of the injury to Butler, who they are hopeful can return for their regional semifinal matchup against Warhill (8-3). “We were up 14-0 in that game against Nansemond, had two special teams touchdowns called back, and then Cam went down.”

In Butler’s absence, a freshman by the name of D’andre Artis-Boone stepped up to direct the go-ahead scoring drive, aided by some strong running from Ford.  A touchdown run from Ford gave King’s Fork the lead, followed shortly thereafter by an interception return for a touchdown from Malachi Nixon to ice the victory.

Nansemond River to face Kecoughtan in battle of Warriors

It’ll be the battle of Warriors at Lakeland High School Nov. 18 when Nansemond River takes on a Kecoughtan team that shares the same nickname.

This also marks the second straight year the two programs will square off in the playoffs, only this time it comes in a round later in the Region 5B field where the victor moves on to the regional title game on Thanksgiving weekend.

In the 2021 encounter, it was Terrell ‘Philly’ Douglas hauling in a 22-yard touchdown pass on the final play of regulation to lift Nansemond River to an 18-12 win.

While Nansemond River enters at 7-3 overall, Kecoughtan is hot at 8-4 overall and riding a four-game winning streak.  That includes two shutouts for the Warriors from the Peninsula District, the latest being a 7-0 victory over Norview in the regional quarterfinals.

Kecoughtan is led in the trenches by Duke commit David Anderson, who entered the playoffs with 15 sacks on the season.

NSA season comes to a close

The 2022 campaign came to a close for the Nansemond-Suffolk Academy Saints at 7-3 overall in a 27-20 loss to Atlantic Shores, the reigning VISAA Division II State Champions.

NSA led on two occasions — 14-7 in the second period after Gabe Wansart connected with Preston Groves on a 49-yard touchdown pass and 20-13 in the third quarter following Wansart’s 94-yard touchdown pass to Isaiah Fuhrmann. But the Seahawks mixed in enough balance on offense with 210 yards rushing and 105 yards passing to rally for the game’s final two scores.

The two teams combined for nine turnovers, four by the Saints, with NSA unable to extend enough drives on third downs, where they finished one for 11. Atlantic Shores also finished with an edge of 18-10 in first downs on the night.