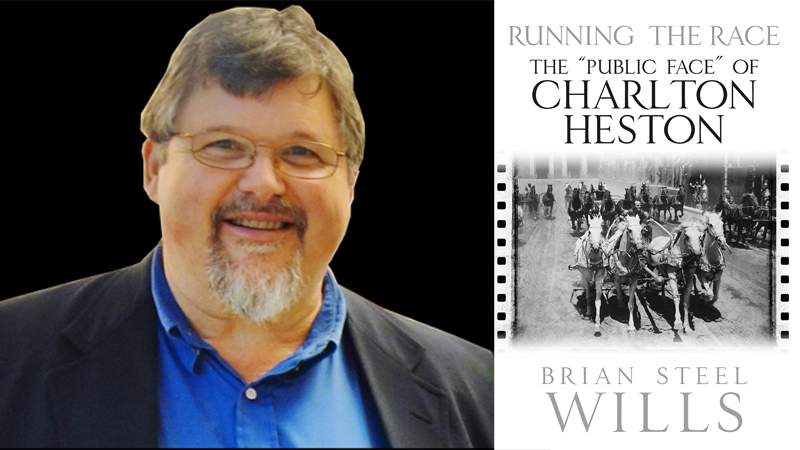 Dr. Brian Steel Wills is celebrating the release of his new book “Running the Race: The “Public Face” of Charlton Heston,” a biography recounting the life of the Academy Award winning actor known for his roles in biblical epics such as Moses in “The Ten Commandments” and the titular role in “Ben-Hur.”

A Suffolk native, Wills graduated from both the University of Richmond and the University of Georgia and is now the director of the Center for the Study of the Civil War Era as well as a professor of history at Kennesaw University in Kennesaw, Georgia. He also is an award-winning author of numerous publications on the American Civil War, including biographies focused on Confederate generals Nathan Bedford West and William Dorsey Pender.

Alongside speaking about the book and the Ben-Hur famed actor, Wills took time in a recent interview to discuss his upbringing, what drew him to becoming a writer, meeting Heston, and the overall importance of history.

“I grew up on a farm in Suffolk, so I really probably think it was the best of all worlds because I had the outside to enjoy,” he said. “Of course, I had to work and that side of it wasn’t always fun.”

For example, Will said he might try to throw a fishing line into Lake Prince.

“But I never caught anything so it never did any good,” he said. “I think it’s mostly standing there and enjoying the outdoors.”

Despite having a traditional farm life with horses, cows and pigs while his dad worked as a peanut farmer, Wills wanted to take a different approach to his life.

“It was really a farm life and I really enjoyed being there, but I told Dad, ‘I love you and I love the farm, but I just don’t want to be a farmer myself,’” Wills said.

He spoke about how he was drawn to writing at a young age.

“Well my mom is a fourth-grade teacher, so I read books and kind of learned history from the get-go, from as early as I remember,” he said. “So, while the outdoors and farm life was part of my world, books were part of my world. When you read books, you learn how people express themselves.”

Wills said he grew to appreciate those who are wordsmits.

“They can create images and ideas and you read the words on the page, but you can see the picture,” he explained. “You can see the piece of history that they’re telling.”

Wills stressed the importance of history.

“If you ever wanted to understand the past, you have to look at what people did and why they did it. Does not mean you have to agree with them. You can say, ‘Well I wouldn’t of made that choice myself,” Will said. “Again, telling those stories and the past has always been part of what made history interesting.”

Wills also is celebrating the release of his latest book, “Running the Race: The ‘Public Face’ of Charlton Heston” through publishers Savas-Beatie. The biography focuses on the Hollywood actor famed for his historical roles in the 1950s and 1960s by taking a look at his work in front of the camera and on the stage, as well as his political values off the stage.

Wills pointed to what drew him to the actor.

“He really was the premiere figure in the ‘Big Movie Epic,’ and so if you look at films that are just big-wide scoping, usually long movies, he would be the one, more likely than not, that you would see,” Wills said. “Now there are obviously other epics that other actors have done through the years, but he seemed to pan out. Whether it was ‘Ben-Hur’ or Moses in ‘The Ten Commandments’ or ‘El Cid.” He seemed to be that bigger than life figure. So I’ve always gravitated to history in film, I love movies.”

When people think of history and epic films, he said Heston is one of the main actors to come to mind

Wills said he decided to write about the Hollywood star because he wanted to know and learn more about him.

“Every time you take up a biographical subject, you spend time with that person, you come to know that person,” he said. “You don’t always necessarily agree with everything they do, but you try to understand what makes them tick.”

Wills decided going into writing this book that he didn’t want it to be just a standard biography on Heston.

“What I wanted to do was sort of say, when you look at his long career, what is it that he was doing to sustain it?” he said. “What was he doing to develop it, and where did he go along the way? Because no matter who you are, your life will change, the interest of the public changes.”

Wills explained what readers can expect from his new book and how it is based around his iconic role as “Ben-Hur.”

“The whole book is sort of built upon the idea of ‘the race,’ which is probably one of the most iconic parts of his career,” he said. “That chariot race that I think you can ask almost everyone, even the generation that doesn’t know as much about him, and they would have heard of it or they’ve seen images of it.”

Wills opted to build Heston’s story around his life in a story that is much like a race.

“So you’re starting that race off, you develop that race, you experience difficulties and challenges and you respond to those, and then you run that race to a conclusion, and of course the conclusion is the end of his career but also the end of his journey on earth,” he said. “So, what I’ve tried to do is sort of make it biographical in part, tie it into Ben-Hur in part, but then also show the complexity and enormity of his contribution to the arts, to politics, to government, to society.”

Will shared his thoughts on Heston’s contribution to society with his work with Dr. Martin Luther King Jr. during the March on Washington.

“One of the things that he did was to lead the Hollywood contingent on the March to Washington,” Wills said. “Dr. King was thrilled and he says, ‘We can have like minded people, but we have to reach out to people beyond the people we would ordinarily reach.’ Dr. King always had that genius about him, that brilliance that you can’t just kind of preach to the choir. You gotta sell this idea of equality and civil rights to the nation, to the world.”

“Different people would say ‘well you know, he’s more conservative, but he leaned toward the Democratic Party, but he said ‘The Democratic Party left me’ and I think there’s probably some way he thought that was true and he began to gravitate more and more and more to the Republican side. But he was always a mix of kind of liberal and conservative — he was a mix of a lot of things.”

Wills said that Dr. King realized if we could get Heston, the civil rights movement would broaden its message.

“But he had a part to his world that’s not always appreciated, especially given how his later connection to the National Rifle Association and his more conservative politics and ties to the Republican Party later would suggest,” he said.

Wills went on to discuss Heston’s desire to not be typecast because he wanted to work in various different genres as an actor.

“I just want them to understand how hard it is to accomplish what he was able to accomplish,” he said. “How much he was not content with just staying in the roles that made him famous, but he was willing to take on new challenges.”

Wills said Heston was an outstanding sort of aging cowboy in a movie called “Will Penny,” and then on the other hand he starred in science fiction movies such as “Planet of the Apes” and “Soylent Green.” On top of these achievements were disaster films and modern films where the actor accepted different types of roles.

“He didn’t want to be typecast, he thought it was important to stretch.”

Wills said Heston also took on a mix of work onstage and on camera.

“He really thought that theater was important,” Wills said. “So it wasn’t just important to get on the big movie screen and have his name on the marquee.”

Heston was aware of that and he understood that, he said, explaining this is how he grew to be better as an actor.

Notably, Wills also recounted how he and his family met the actor after seeing him in a play.

“I’ll never forget at one time he was in Norfolk with his wife doing a play, and I took my parents to see the play and then we asked to see him after the play,” he said, noting that Hetson came out and spoke to him and his mother and father. “My dad, who had been a farmer all his life and really just a kind of man of the earth, he looked at him and said ‘here I am, a farm boy from Suffolk, meeting Moses!’”

Wills shared what he believes readers will take away from Heston’s story.

“I just really hope they’ll really learn to appreciate his broad journey of work, but also the public service he did, and really just enjoy reading about and how hard and how much work he put in to making himself successful,” he said.

“Running the Race: The ‘Public Face’ of Charlton Heston” is now available at Amazon and Barnes & Noble via Savas-Beatie publishings. The book also is available locally at Riddick’s Folly, the Christian Bookstore and the Suffolk Center for Cultural Arts.