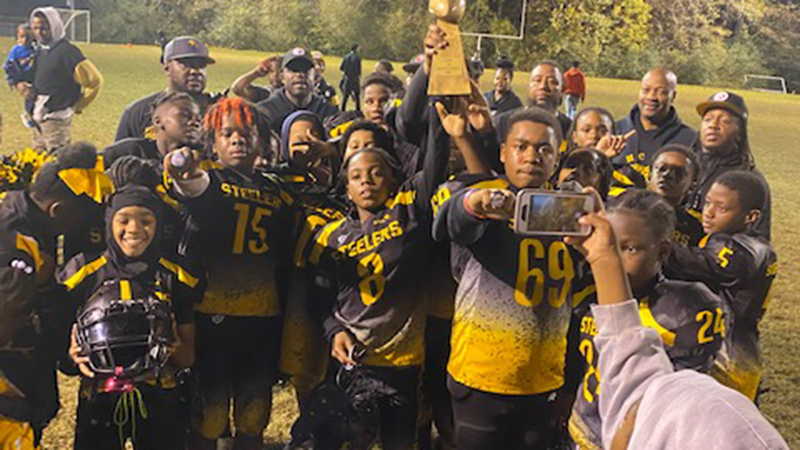 The three Suffolk Steelers division teams are moving on to compete for the league championship after shutout wins Saturday, Nov. 12.

The 8U, 10U, and 12U, which is the team Evans coaches, defeated Surry County and now go on to compete in the Peninsula Youth Football and Cheering Organization East for the league championship.

Along with Evans, the 12U division is led by head coach Jermaine Harry with assistant coaches Demetrius Harper, Brian Bake, and Orlando Gordon. Evans talked about the games, his team’s achievement, and his hopes for the team’s future.

He said it was a close game in the first half for his team.

His 12U Steelers were up 7-0 in first half, but a second touchdown in the  second half helped them clinch the win.

The scoring came on a touchdown from Zyion Greene, their quarterback, and then the other score came from Nas’ier Jones,” he said. “Zyion was one on the ground and one in the air to Nas’ier Jones.”

Through the season, he said the team faced a couple of challenges, such as issues with transportation and uniforms.

“We started the year off with 26 kids and we finished with 16 motivated and dedicated kids. And yeah, we ended up finishing up the season and winning the championship,” Evans said

Evans also talked about the importance of the Peninsula Youth Football and Cheering Organization and how significant his team’s results were as their first year in the league.

“It was actually our team’s first year in the league, so it was great that we won the championship in our first year,” he said. “The Suffolk Steelers haven’t won a championship in over 15 years in our organization, so that was outstanding. PYFCO, they welcomed us in the first year, they welcomed our cheering squad in… Overall, great conference and support through the conference this year.”

Looking towards the future, Evans hopes the same energy of volunteering and mentoring carries over into next year.

“We’re looking to have a bunch of dedicated volunteers come out next year,” he said. “We had about 30 this year with the organization.”

With dedicated volunteers, he said, they are able to provide mentoring for both football players and cheerleaders next year.

“We’re hoping to be able to repeat my team, the 12U team. We have 10 kids coming back from this year’s team,” he said. “So all the coaches, Coach Harris, which is our head coach, then my assistant coach and myself, we’re looking forward to having those 10 players back next year.”

Evans has high hopes for what the students will take away from their achievement at the games.

“Oh man, memories!” Evans said. “We’re hoping they’ll take away memories, the hard work and dedication throughout the season. We teach them that every kid has a gift or a talent and hopefully what they learn throughout this year, hopefully that they learn dedication, hard work, motivation is just to take those things on in life. Take those character building skills and just to help them to be able to succeed in life.”