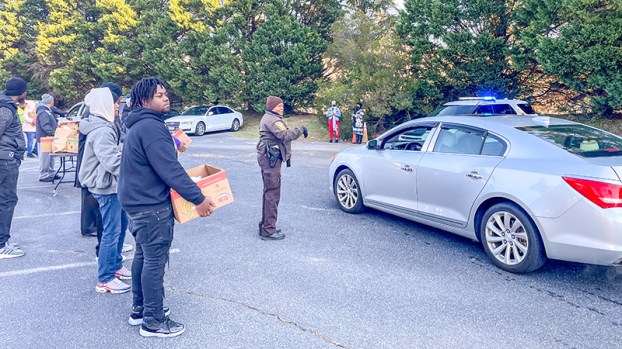 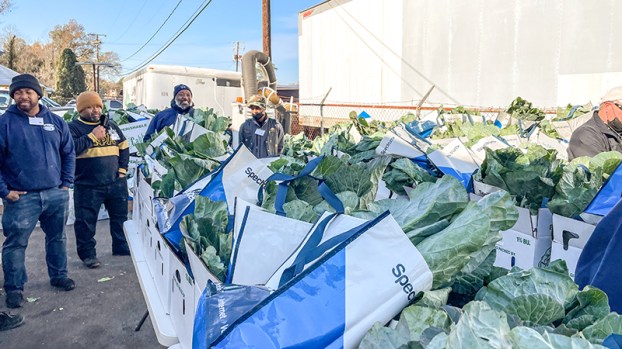 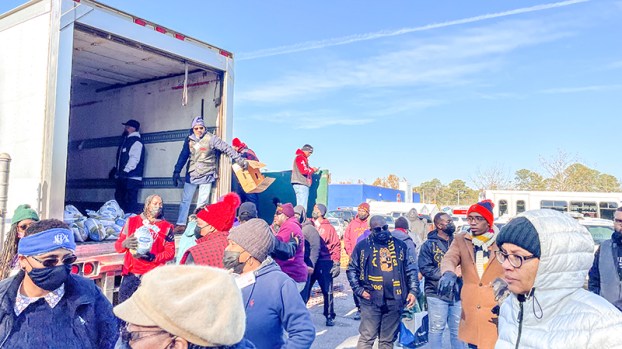 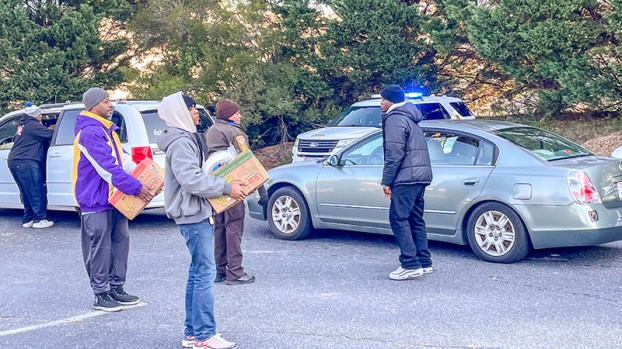 Two local groups and a host of volunteers carried on what is an annual tradition Saturday as they worked to ensure Suffolk families have the food they need for the Thanksgiving holiday.

Nonprofit organization Suffolk United held its annual food drive-thru at 201 Holly Lawn Parkway where many churches and volunteers came together to provide food, plates and drink cups to citizens.

Suffolk United Assistant Ebony Drayton and Rashida Powell-Hutson both took the time from their work to share about the group’s effort that has been ongoing for five years.

“Different churches come out and bring different items to give out to the community,” Drayton said. Some churches are responsible for greens, corn, potatoes, cake mix, paper products, everything you need for a Thanksgiving holiday.”

Powell-Hutson said the community effort is important and has become so successful in how it helps others.

“What I want people to take away from this event is that together as a community,” she said. “We can make these initiatives and effort successful, because it took the effort of all of us together.”

Powell-Hutson said she had been onsite getting things together since 6 a.m. Saturday morning. She said she worked with others to pull out tables and to ensure donations that were dropped off got to the correct place for distribution.

“It took a lot of organization. But in all, it was a lot of community work. It was a cohesive effort,” she said.

This effort had more than 238 volunteers who helped provide turkeys and food to Suffolk locals.

“We’ve been able to serve 8,000 families, which equates to over a 140,000 individuals in the last 20 years,” Williams said. He looked back at how the event has grown over the years.

“I wanted to impact the community 21 years ago and the Lord laid it on my spirit that ‘Do something on Thanksgiving.’ People need help on Thanksgiving,” Williams reflected.

Initially he said he started off with 200 turkeys and over the years, now it’s up to 2,000 for each event.

“So we incorporated the collard greens and the cabbage,” he said. “Of course, we serve food while people are in line and give them drinks. We just want people to be comfortable when they come out.”

Williams said the event has gotten so large there are are many people they only see at the event. The day provides time to talk with people, he said. “It’s just a meeting event where people come together and just be grateful…”

Williams also explained how locals, whether new or just hearing about the event, can sign up for next year.

“The only thing that I require is if it’s a church, something on a letterhead, just ask to be placed on next year’s vouchers list,” Williams said. “The same with your clubs or social organizations, same thing. Just something on letterhead, just requesting to be a part of it and then I will add them to the list.”

Finally, Williams said he hopes the annual project encourages people to be kind to each other and to take time to let them know there are people who care.

“Just let people know that you’re not out there by yourself,” he said. “There’s someone there to help you, that’s willing to help you. But the way society is now, some of which, they don’t do that. Since COVID, people used to stay at home. They’re not used to getting out talking to people, engaging in conversation. We need to get by out, we need to get back into the community. We need to see people, talk to people, encourage people, and make this a better place for everyone.”