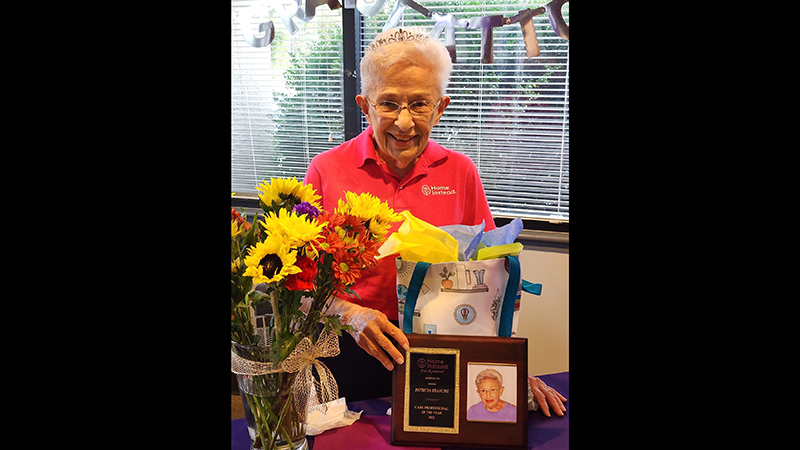 “Care Pro of the Year” Pat Branche has been honored by Home Instead for her caregiving work over the course of 11 years.

Pat Branche won recognition from Home Instead for her service to those she has served for more than a decade.

Branche joined the company Aug. 8, 2011, Branche continued to serve Home Instead with the same client until his passing on June 15.

Local Home Instead owner Nell Neal said she is grateful for Branche’s work as well as the overall duties and qualities that caregivers have.

Neal met Branche in 2010 after calling Home Instead for assistance with a friend she was caring for. It was here that Neal saw Branche’s ability as a caregiver and after her friend’s passing, reached out to her to join the agency.

“She accepted an assignment after she had finished her training and faithfully served until June 2022,” Neal said. “Pat cared for her client the same way I observed her caring for her dear friend some 12 years prior. As a result of her consistent care, this client was able to face each day with better quality of life knowing that his needs would be taken care of.”

Neal talked about the various duties that caregivers perform for their clients and how they become like family over the time of their care.

“Duties entail housekeeping, meal preparation, grocery shopping, helping them with their day to day activities,” Neal explained. “They become surrogate daughters and sons to them at the season of their life where they need a little help.”

Likewise, she made pointed out the difficulties of the job and how those they serve deserve both assistance and the boundaries of being themselves.

“It’s not always easy because you have to give so much of yourself, but it’s very rewarding,” Neal said. “You have to have a fine balance in being helpful and giving that independence.”

While Neal noted that they are always hiring, she also spoke of the top traits that applicants must have to be a caregiver.

“One of the main characteristics of a caregiver is having a heart of serving,” she said. “They also should be a servant of leadership through love, compassion, and commitment.”

Finally, Neal said she was blessed to have known Branche and to have seen her work.

“One of the greatest blessings of being a franchise owner is observing our Care Pros ‘making a difference’ in the lives of seniors and their families,” she said. “Pat is one of those special people that God brings into your life to remind us of how impactful compassion and caring is to people.”