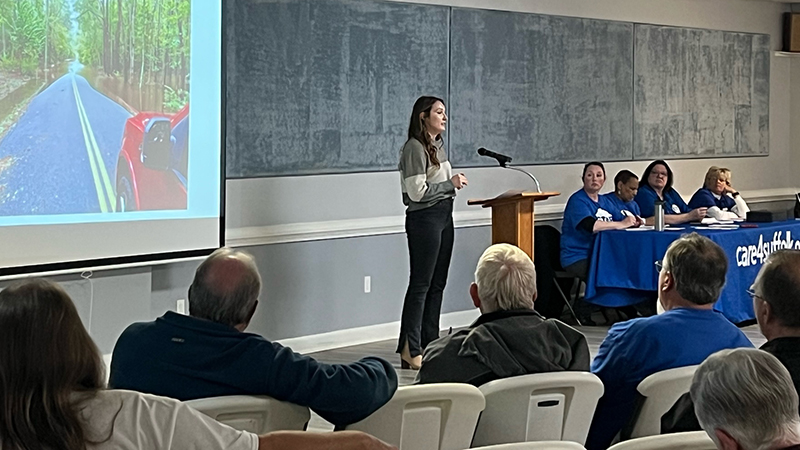 Engineer Sydney French speaks to the audience about different growth areas that are not equipped to handle rain and flooding.

Editor’s note: This is part one of two following up on the recent town hall meeting with Care4Suffolk board members and Suffolk city officials. The second part, to be published Sunday, Dec. 11, delves into the purpose of the comprehensive plan and what the citizens group and city officials believe is needed to update it for 2045.

With the recent uptake in traffic, rezoning and agricultural issues in Suffolk, locals and city officials are having conversations and sharing ideas on helping the city move forward.

A Nov. 17 public forum organized by Care4Suffolk drew about 70 people, including city officials. Alongside learning about the 2045 Comprehensive Plan, topics also ranged from school overcrowding, farm conservation and the importance of public participation in comprehensive plans.

Care4Suffolk board members Dr. Sherri Johnston and Bryan Harris, as well as both Deputy City Manager Kevin Hughes and Comprehensive Planning Manager Keith Cannady, spoke about the outcome of the town hall meeting, the recent city issues, detailing the 2045 plan, and looking toward the future.

Both board members and both city officials who attended the town hall spoke on their biggest takeaways.

Johnston spoke on how good it is that the city is listening to their concerns and how there will be future meetings to continue the conversation.

“Even the conversations we had afterwards with the staff that was there from the planning commission and from the city’s manager’s office, that we are being heard,” she said. “I purposefully asked the questions at the end of the meeting regarding focus groups and how citizens can get involved. Having that successful meeting, the city has agreed to hold future meetings, public forums as that one was set up to start to share their ideas.”

Johnston said she thinks they’re starting to have a positive voice.

“We’re not out picketing in front of their offices, we’re trying to be partners with them to do the right thing,” she added.

Harris likewise appreciates the acknowledgement of city officials and spoke on how he wants to work together with them to provide responsible zoning for Suffolk.

“If you consider the level of work that our city officials have in front of them, the fact that they came out to hang out with us, at the edge of a dark road, in rural Suffolk on a Thursday night,” he said. “It’s comforting to know that there’s at least a level of care and appreciation of concern for the citizens. Care4Suffolk doesn’t ever want to be put in this light where we’re just complaining. We’re looking to partner with the city, to help with responsible zoning that supports what the current citizens, people who are already here, and looking for in the future, that should be the priority.”

Harris said he believes there is genuine acknowledgement from planners and from city management that there is something going on that they need to give their attention.

Cannady spoke on how he saw the group’s passion for the city at the meeting and noted the importance of their work.

“My biggest takeaway was how much this group cares about Suffolk. It just came through as genuine and so important to the project that we’re working on,” Cannady said. “It may sound so obvious, but we all care about the community that we live in or that we work in, and the future of that community.”

Hughes also spoke positively on the forum and how it also provided knowledge of the comprehensive plan.

“It was a great opportunity,” he said. “We’re glad to be there and glad to be invited to hear from folks in a very organized manner, so we’re really appreciative of the way that they set it all up.”

Hughes said it is beneficial to hear from people in all parts of the city, including those in the southern and western sections.

“For us, I think it was beneficial to hear from folks that have recently been involved or had their attention gather related to some recent applications for rezoning, and so their context and the way that they saw the comp plan was in a new view that related to a new application or proposal of housing near them of development. So, it had an element of interest related to very real applications and then understanding how that application process works in the context of the comp plan.”

The goal of the town hall

For Care4Suffolk, Harris believes their goal was accomplished, namely with bringing awareness to both the city and locals, as well as the 2045 plan.

“Goal one really was to promote awareness, but I think awareness is split between city officials and locals because there are so many people who still don’t know about the 2045 plan or even what the heck the comprehensive plan is,” Harris said.

“So I think the overall goal of awareness was met, and I think that goal split into two parts… that there is public concern and interest in participating in the 2045 comp plan. …The second part of that goal was reaching other people that we didn’t know about.”

Of the 70 who attended, she said she did not know about half of them.

“Goal two is really kind of presses off of that… keeping constant contact with people who are concerned and providing opportunities for people who want to speak and want to participate,” she said.

Harris continued further on the importance of having an accessible format for the citizens to voice their concerns.

“People want to participate. People have things that they want to say. But the city of Suffolk has got to do something about making it easy and accessible for people to do that,” he said.

Johnston likewise believes the forum was a success, notably on bringing a public voice on the rezoning issues.

“I think one of our goals was a call for action, not only for the city, but for citizens. Nobody really knows what the 2045 plan is until you’re up in opposition to a rezoning, and that’s when you learn about that document,” Johnston expressed.

“So the call to action was for the city to hear us and for people to stand up and be heard. We did give that opportunity… but we want the city to loudly hear us say, ‘…really think about rezoning approvals beforehand and hear the public.’”

Cannady spoke on the overall goal of providing public information on the 2045 plan and the importance of knowing who’s meeting it is.

“For us, I think it’s important with a meeting like that to kind of acknowledge who’s meeting it is, who called the meeting. Sometimes we’re that person, that organization and sometimes we’re invited. We were invited to the group’s meeting,” Cannady said.

He said his goal is to help them achieve their goals.

“I mean, our goal was to kind of let people know about this project and develop a level of awareness and hopefully understanding for what the Suffolk 2045 is all about,” he said. “So, I came away from that meeting thinking that we met that goal, but frankly I think a lot of the credit is due to Care4Suffolk for creating that forum and sort of structuring it in a way that people felt comfortable enough to attend and participate.”

Hughes likewise believes the forum was a success.

“So I think the goal was to provide information on the comp plan, the process and the importance in the role at place, that was mission from our staff number one. Additionally, it was following that to then sit back and get information related to what was important to the audience, or things for consideration,” Hughes said.

“Everybody’s take and everybody’s comments are different to a certain degree, because it’s personal to you or your family or where you live, so everyone has a different kind of take on to it.”

With that context, he said he believes it was a good opportunity for them to give information, but then to sit back and receive information.

“I heard themes on rural parts of the city and I heard sections on impacts on schools,” he said. “We heard things related to the watershed, traffic, there’s even discussion in interest in economic activity specifically for the youth of the city. And so, taking that all in and processing that in its context, is kind of the next steps for us.”

Hughes looked ahead on how to continue taking this conversation into other parts of Suffolk.

“That’s one opportunity for us to receive information. We previously received information via the survey tools,” he said. “One of the things I think that we took from this engagement is that, how do we replicate it in different parts of the city? So that’s one of the things that we left with.”

Hughes said those in the group presented well-organized, thoughtful insight for city officials.

“How do we, because Suffolk is so large and so diverse, how do we make sure that we get similar voices and similar concerns in different parts of the city? And so, that’s something that I left with, and something that we were challenged to ensure that we do that.”