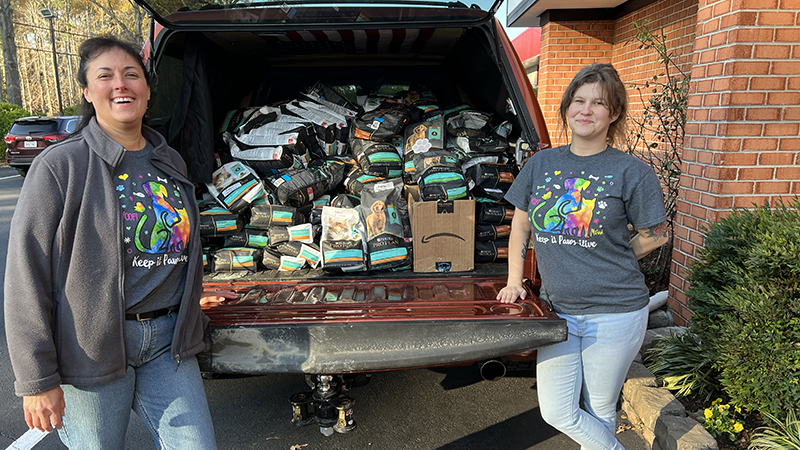 Dr. Amber Carr of the Suffolk Animal Hospital helps Tracy of Suffolk Humane Society with a Thanksgiving Food Drive, another collaboration to help the animals of Suffolk.

Local pet owners turned out to get help with microchips for their companions Saturday, along with their rabies vaccinations.

The Suffolk Animal Hospital and Suffolk Humane Society partnered together for the Dec. 10 Microchip and Rabies event held at 1232 Holland Rd.

Suffolk Animal Hospital owner and Veterinarian Dr. Amber Carr spoke on how the event had more than 60 pets and how she and the Suffolk Humane Society team are focused on helping the Suffolk community.

“[We] organized this with the Suffolk Humane Society and all of the owners have been very appreciative of everything that we’ve been able to get this accomplished in such a short time,” Carr explained at the event.

Suffolk Humane Society President Margie Wiley also spoke about how a COVID-19 grant from the community allowed them to provide help to Suffolk’s animals.

“We felt that as though partnering and doing this, especially with rabies and animals who test positive here in the city, and then our companion animals can get affected, and also dogs or cats can get lost,” Wiley said. “So, being able to have a microchip and have them get home safely is just a terrific benefit for the community. So we thought it would be a win-win to offer this as part of that grant.”

Wiley and Carr both spoke of their hopes for the event to keep animals safer and understand that there are many pet parents who want to get a microchip, but can’t afford one.

For example, Carr said an indoor-only cat that never leaves, but accidentally gets out when the pet sitter’s there and doesn’t wear a collar because of course it never leaves is when unwanted situations that arise and microchips can prevent the pet from being lost.

“Or the dog that breaks free of its collar when you’re out on a walk and doesn’t have its tags because of that,” he said. “The microchip is the one, nice, permanent form of identification that goes wherever your pet goes regardless of what’s going on.

Wherever the pet, Carr said it can be tracked back to the owner as long as one takes that information with them and gets the pet registered.

Finally, Wiley and Carr both expressed how crucial it is for pet parents to get their microchip properly registered to complete the security process.

“A lot of folks feel as though once the microchip is in, that’s it, they don’t have another step to do,” Wiley said. “But if you don’t go in and actually register it yourself as an owner, then there’s no way to tie that number back.”

She said it might even just be good for families that have animals who haven’t completed the process to takea minute to go ahead and just make sure it’s up to date.

This will help them tie the pet to its vet, with the owner’s phone number.

“There’s nothing more frustrating than having a found pet come in, we scan it, we’ve got a chip, and that chip was never registered,” Carr said. “That’s one step that could have easily been taken, takes less than five minutes, and it could have reunited a pet with their owner.”