Input from residents, businesses key to planning for the future 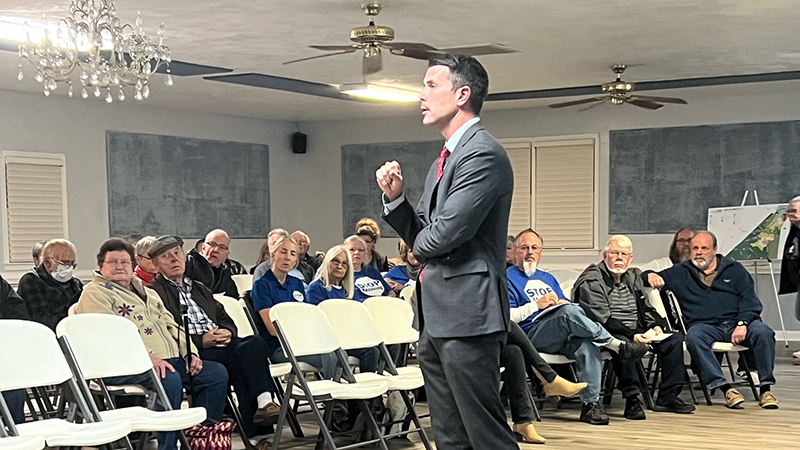 Editor’s note: This is the second part of a two-part series on the development and need for input in development of the city’s new 2045 Comprehensive Plan.

An important element of planning Suffolk’s future is ensuring the public’s voices are heard and included through the process.

He explained that they are writing and developing a plan based on what residents and businesses say, and the experience of those who work and live, develop and invest in Suffolk.

“At the end of the day, we’ve got to take all these layers and try to come up with a plan that builds upon what we think has been successful thus far, anticipate what the future looks like, and everything else in between,” Hughes said.

Comprehensive Planning Manager Keith Cannady also talked about the importance of the public’s voice in developing the comprehensive plan.

“I like folks to know that this project is underway first of all, and that they have an important role in this,” Cannady said. “If this is something that’s important to you, your voice is important to the process.”

Getting input from different groups and individuals is important as they work to produce the new 2045 Comprehensive Plan.

Along with Hughes and Cannady, Care4Suffolk board members Dr. Sherri Johnston and Bryan Harris spoke about the recent town hall meeting and developing the new vision for the city as they look toward the future.

What is the 2045 Comprehensive Plan?

According to the official Suffolk2045.org web page, the 2045 Comprehensive Plan is “a tool to prepare for change and acts as both a business plan and guidebook for decision-makers.” The plan is noted for not being a legally binding document and is used as a “foundation for budgeting decisions, zoning ordinances, land development regulations, and more.”

Hughes spoke more in depth about the comprehensive plan.

“It has multiple chapters. It ends up being as an organization, as a city, probably the largest effort that we put in place to kind of stop, take a temperature of growth, how we’re keeping up with it, how we’re measuring it, and what that means for multiple aspects,” Hughes explained.

The comprehensive plan is put to use in a couple of different ways on a regular basis by the city staff.

When reviewing the location of a proposed development, he said they compare it with the comprehensive plan to see what it recommends. If it appears to work within the guidance of the plan, then it continues to move through the process.

“Why can it continue to move along,” he said. “Because there’s water nearby or the density works as far as how many units per acre, or the roadways can support it or can be improved to support it.”

Likewise, Hughes spoke about the process of the applications that aren’t accepted and how the 2045 plan comes into play with each department.

“What folks don’t get to see is the ones that don’t move forward,” he said.

There are many times when developers ask if they can build a subdivision in a particular location. He said they put it up against the comprehensive plan and often respond that it is not supported by the vision laid out in the document.

“So, if you want to move forward in the process, you can, but do it at the risk of we can’t support this,” Hughes said. “So there’s always that back and forth.”

Additionally, he said the comprehensive plan comes into play with multiple departments. Currently both the fire and police departments are going through certification, while Parks and Rec just completed its certification through these industry standards best practices.

“Through that process, they want to ensure that the city has taken the time to examine itself, examine what these departments mean, are they thought through when you think about development?” Hughes said. “It is frequently referenced that yes, the city council has adopted a large document that speaks to how these departments work within development and what that all means.”

Hughes went on to say that it’s not whether he believes a project is a good one. It has to be considered from the city’s perspective using the comprehensive plan as the lens.

“We stop and take two years to put this document together to give us some direction,” he said. “Then we’ve got codes underneath it that says ‘OK, the sidewalk has to be this wide,’ but before we get to that, we need to ensure and show ‘OK, we want to see something happen there and what do we want to see happen.’”

Looking toward the Future

Hughes said city officials want a very thoughtful plan related to how the city is going to grow and develop. Within that, it has to work within the complexities that are Suffolk.

“So, you’re talking about redevelopment in downtown, land preservation around our parks and how we want to look at the rural and agricultural aspects,” he said. “There’s so many mechanisms and dynamics in the city, this document takes as many into consideration as we can and in a thoughtful manner, put together a plan about how they work and keep Suffolk a special and interesting place. I live in Suffolk. I work in Suffolk. I want to be proud of the city of Suffolk. So for me it’s personal and business.

He said he takes great responsibility in knowing that their actions affect many people in the city, outside himself and his family.

“It’s our goal to have a very thoughtful, well orchestrated, well developed plan that we can take to city council and the public that they can understand at least where we’re coming from, and see where we’re going,” Hughes said.

He stressed that it must be used to help plan and manage growth across the city.

“What the details are, will have to occur over time by property owners, but ultimately it does map out what the anticipated development of the city will be. It’s not really a secret,” he said. “The details have to get worked out later, and those can be controversial at times, but it does give you a plan of where we’re headed.”

For Cannady, the plan offers up the opportunities that the people of Suffolk are interested in seeing developed.

“You find that you are in a position to influence those outcomes in a positive way. To me, that’s what this is really all about,” Cannady said. “You care, that’s great and you want to have a positive future for your community, your neighborhood, your business in the city. And you care enough to want to do the things that are going to continue to make that successful. It’s never perfect. That’s kind of why you have to keep at this, because the world changes, the things that are impacting your organization, your city are going to change.”

With this in mind, he said it’s crucial that they build and improve on the current document so the city continues to move forward.

“It’s a great feeling when you realize that the decisions that you made five years ago are putting you in a better position now than you otherwise would have been,” he said.

Johnston stressed that she believes it is like what Mayor Mike Duman said at the end of the last meeting. Suffolk is not like other cities because each of its boroughs have different character that should be retained.

“I’ve only been here for less than five years. When I came to Virginia, I had a choice on where to live. And I chose Suffolk knowing I was going to drive 45 minutes each way for work,” she said. “I chose this because of the rural feel. I chose this part of Suffolk, not Northern Suffolk where roads are better, things are better, and I chose this area for that character. And I hope they can retain the character from the different boroughs.”

For Harris, he stressed the importance of preserving the city’s land.

“Suffolk is a national leader in many assets of agriculture and we are so quick to dismiss that for the latest fad,” Harris said. “Right now it’s residents and these warehouses. I wholly support landowners’ right to sell their land, but when that pops up, the city should not be so quick to replace it with asphalt and rooftops.”

He said he believes the most important thing that Suffolk planners should consider is one that people come here for space — one acre, two acres, three acres of space. “That’s why people come here,” he said. “We should embrace that. And it’s OK to not be part of the latest trend.”