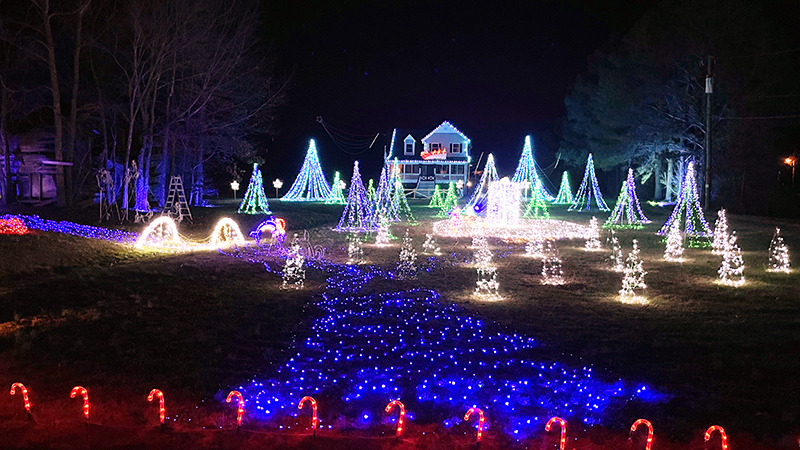 Since 2012, Jon Adams (Suffolk) has taken time from a busy career in the U.S. Coast Guard to work with his entire family to create the unique, ever-growing show that draws hundreds of people from all Hampton Roads and Eastern North Carolina.

The annual Adams Family Christmas Lights display has something for everyone in Hampton Roads. Situated on the South Side of Suffolk, this display features more than 100,000 lights, a village of Christmas inflatables, a land of snowmen, shooting stars and a forest of trees that dance to the music played over your car’s radio.

“Putting together this show is a fun family project, but it doesn’t just come together at the last minute,” Adams said. The 40-day setup process normally starts the week of Halloween.

“The logics and planning start for the next year as soon as the lights turn off on Jan. 1,” Adams said. “I start planning what I can do to enhance our display and really bring the wow factor.”

The father of three says he couldn’t do it without the support and help from his family. This year, 12-year-old Madelynn pitched in for setting up the display’s 45 lighted trees. Adams said four-year-old Henry also has been a big help.

Christmas has always a special time for the entire Adams clan, despite being scattered from Virginia to Michigan.

Family Patriarch Roger Adams’ greatest joy was serving as Santa Claus for the children of Michigan’s ‘Thumb’ and parts of the Detroit area. His wife, Jo, enjoyed being Mrs. Claus.

“There were always lots of parades, photo shoots, office parties, and meet-and-greets with kids on our calendar for the Christmas season—even photos with fur babies when we volunteered for Humane Society fundraisers,” Jo Adams says. “But the giving spirit all year long was always our goal.”

But the Santa responsibilities never ended with the holiday season.

“My dad would have kids come up to him all the time—even when he wasn’t in his Santa suit,” Jo’s daughter and Jon’s sister, Sarah, said. “The parents would apologize, but Dad would just get a twinkle in his eye and would ask if the kids had been good this year. He always made sure to remind the young—and the young at heart—to keep the spirit of the Christmas season.”

Roger Adams died after a brief illness in 2016, an event his family said shattered their world.

“It was such a rough time, especially that first Christmas without him,” Jon Adams says. “But that made us want to grow our display here in Virginia and dedicate it to his memory. So, when you arrive for the show, you’ll see a sign with a picture of my dad in his cherished Santa suit greeting you.”

The Christmas tradition for this family doesn’t stop there. Each year, the Adams’ dedicate their time to enjoying other light displays in the area as well. One in particular made young Henry Adams a super fan of Christmas.

“We visited Booker T. Washington Elementary Wacky-Tacky Garden of Lights when Henry was just old enough to stand, and he fell in love with the lights,” Adams said. “His fascination was actually captured on the front page of the Suffolk Herald’s Christmas day paper. His love for all things Christmas has only grown since then, and he’s been an inspiration to keep our display growing as well.”

Adams said a lot of support for the annual Adams Family Christmas Lights show comes from Michigan. Jo Adams, as mom and grandma, contributes new display items every year from the Detroit area. Jon’s sister Sarah spends countless hours in Mid-Michigan editing the display’s music and then flies down to Virginia each year to produce and edit professional videos. This year, she is joined by her fiancé Preston who will experience the show for the first time in person as his official induction into the Adams Family holiday tradition.

“I like to think my dad is smiling down on us each year,” Sarah said. “We’re all so proud of the legacy my brother and his family are creating for all of us.”

The Adams Family Christmas Light display is located on the 300 block of Babbtown Road in Suffolk, VA. The display runs from 6-10 p.m. every night through Jan. 1. All shows are weather permitting.

For more information on the display, as well as behind-the-scenes photos and videos, visit www.facebook.com/Adams-Family-Christmas-Lights.