No injuries reported in fire that damaged downtown residence 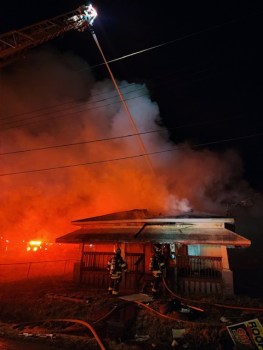 Firefighters mount an aggressive attack on the fire at this downtown Suffolk home in the early hours of Tuesday morning.

An early morning fire at a downtown Suffolk home caused no injuries, but Suffolk Fire and Rescue did rescue one family pet.

The city’s emergency communications dispatched Fire and Rescue at 12:35 a.m. Tuesday, Dec. 20 to the 200 Block of South 7th Street for a residential structure on fire.

Medic 3 arrived at 12:36 a.m. to find heavy fire and smoke showing from a one story detached residential structure, according to a news release.

An aggressive interior attack was initiated by crews while searches of the residence occurred.  After searches were completed and with the fire advancing through the roof of the structure, officials said a defensive operation was used to control the well advanced fire.

One animal was rescued by firefighters. The residence was unoccupied at the time of the fire.  No firefighters or civilians were injured.

The cause and origin of the fire is under investigation by the Suffolk Fire Marshal’s Office.

A total of 16 units from Fire and Rescue and the city’s Fire Marshal’s Office responded to the call.