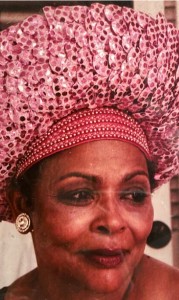 Vera Thomas was born on January 15, 1944, to Elaine Estelle Wright and Hucless Bernard Thomas in the small town of Hobson. After graduating from East Suffolk High School in 1963, Vera attended Norfolk State University where she earned a bachelor of arts degree in Education in 1967. Her beautiful and energetic spirit brought her much recognition. She was named Miss Norfolk State of 1967, but also Miss Persian Rifles and Homecoming Queen. NSU also was where Vera developed a life-long love and dedication to her sorority, Alpha Kappa Alpha Sorority Inc.

Vera came to San Diego County, California in late 1967 and soon established herself to begin a career in education. Vera fulfilled her dream of touching the lives of children and inspiring a love of learning through her work in the South Bay Union School District. She served the district as a classroom teacher and a reading specialist for many years. Having a desire to reach more students and to positively touch school communities, Vera worked to earn a master of arts degree in education from Pepperdine University in 1977 which led to her becoming an assistant principal, a school principal and later a district administrator. Vera retired in 2004 after a long and fulfilling career in education and after touching the lives of thousands within the school district.

Living in Bonita, California for many years and raising her children there, Vera was a devout member of the Bayview Baptist Church of San Diego. She served as a member of the church choir and was involved in many other activities as well. In 2006, Vera decided to leave California and moved to McDonough, Georgia. In 2022, to return to California with her son to resettle in San Diego County. Vera was called home by the Lord Jesus Christ on the morning of Nov. 29, 2022. Vera is survived by her daughter, Sonja Walton-Bingham and her son, William L. Walton, Jr.; her three grandchildren, Christian Charles Bingham, Jordan Thomas Bingham and Verlyn Yvette Bingham; and her siblings, Hucless Bernard Thomas Jr. (Melinda) of Hopson, Vernell Mitchell (Randolph) of Suffolk, Estelle White (Wallace) of Decatur, Georgia and Earl Thomas (Yvonne) of Churchland.