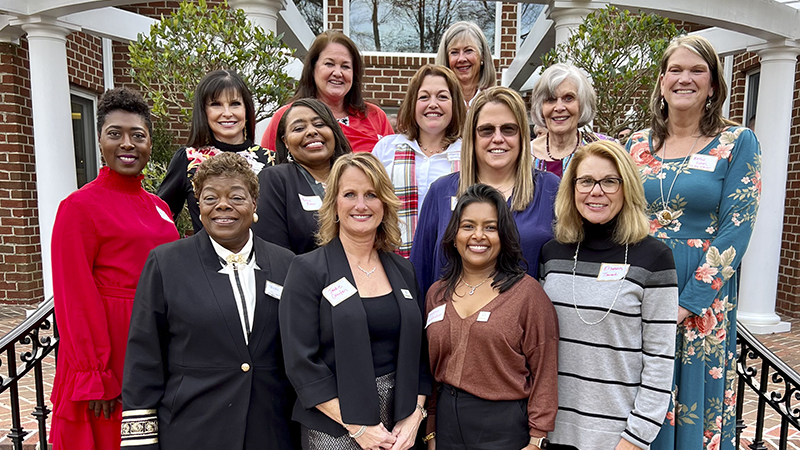 The Women’s Impact Fund continues to provide grants while inspiring local women in the process.

Founded in 2018, the fund was created to provide help to women and children in the Suffolk and Western Tidewater area. During its holiday party on Saturday, Dec. 11, the fund held its Grantee Awards Presentation where they awarded grants to three different organizations to benefit the environment, education and mental health.

WIF Chair Jackie Overton said there were five founding women that began the talks of wanting to start an organization within our community that could benefit initially at risk women and children.

“They were seeking out organizations that were already established that had programs within them that we could offer grants to to assist those programs a little bit,” Overton said. “These five women, after they founded, they began to build a strong network of philanthropic women to build the membership. It began as a small endowed fund and the whole program was underneath the umbrella of Suffolk Foundation.”

She said WIF is a separate organization, but it falls under the umbrella of Suffolk Foundation and they help manage the endowed fund.

“We just continue to grow,” Overton said. “We continue to grow our fund, and are able to offer higher grant levels and multiple grants across the board to different organizations,” she said.

Overton explained how she joined the WIF and how her sister inspired her to make a difference.

“I was invited to just find out a little more about Women’s Impact Fund through a social they were having and I was reaching a stage in my life where my children had begun to go off to college,” she said. “I had more time to try to extend my life outside of the bubble that I had been functioning in with my children and their school. So, I went to this first meeting and learned a little bit about how the mission was to help women and children.”

Overton said her backstory was that, two of her children are my sister’s children and she was a victim of domestic violence.

“I was desiring initially to become more involved in an organization that might be able to help people that have had trauma from that type of a situation,” she said. “And just, the lifestyle that it throws them into as a result of that. As we grew, we discovered that there were education programs in the community that helped with hunger or with essential needs of various types.”

Raghubar also spoke of her beginnings with WIF after being invited by a former board member.

“I was invited by a former board member to attend a social, actually it was back in 2019, and I had just recently retired as a Coast Guard Dental Officer,” she said. “I was actually looking for another way to serve and I immediately decided to settle in Suffolk.”

Raghubar explained how she was inspired during this time by a Certified Nursing Association scholarship the WIF offered to the College and Career Center at Pruden.

“I’m a firm believer if we can plant the seed of knowledge, in everyone, but a young woman who would later go out to become potentially a mom and a leader of the community,” she said. “This was for a licensed practical nurse program and I envisioned potentially this person becoming a registered nurse and being able to take care of herself or her family later.”

It really moved Raghubar because she spent 24 years in active duty service.

“I think women function all around — in home, outside home, beyond,” she said. “I think it’s a great way to build a society to keep women empowered and engaged. It really moved me to continue to be part of this organization.”

During this year’s Grantee Awards Presentation, the WIF awarded funding to three different organizations – the Nansemond River Preservation Alliance, the College and Career Center at Pruden and the Blakey Weaver Counseling Center.

“As we’ve carried on in the last couple of years, we’ve just continued to grow and be able to extend grants to lots of different organizations and one of those this year,” Overton said. “The Blakey Weaver Counseling Center is a program in conjunction with the Genieve Shelter, which is a domestic violence shelter. The program is offering counseling to children that are in trauma as a result of that situation.”

The College and Career Center at Pruden once again received a grant from WIF for its CNA program for one full scholarship and two partial scholarships.

“She was able to ascertain a paid internship in her first year of freshman college, which is very difficult to come by for a first-year student,” Raghubar said. “She also chose to go into Environmental Studies, so just seeing that seed was planted.”

Raghubar pointed to WIF’s overall hopes saying they would like to bring awareness to the Women’s Impact Fund in the Suffolk community, hoping like-minded philanthropic women will join.

“Second, make aware the other organizations that we offer grants to that they’re out there and how they utilize our funds, and we are here to assist and we welcome new members,” she said.