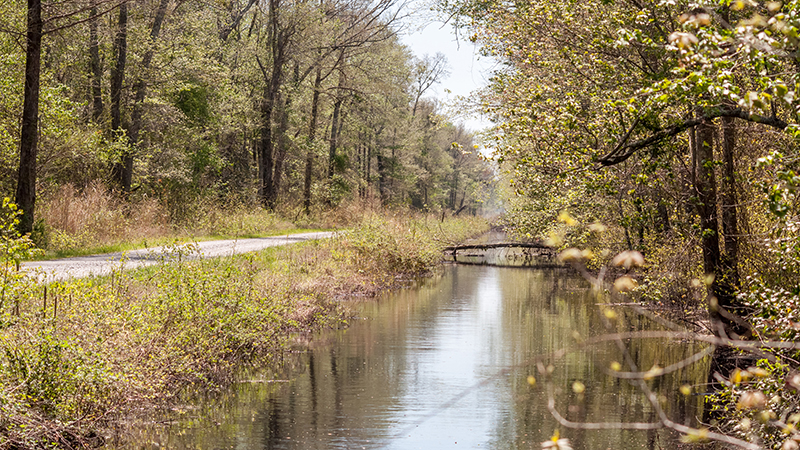 A bill initiating the process of designating the Great Dismal Swamp as a National Heritage Area only lacks the President’s signature to become law.

Both the U.S. House and Senate have now approved the legislation that directs the Secretary of the Interior to assess the suitability and feasibility of designating the Great Dismal Swamp and its associated sites as a National Heritage Area. The Senate gave unanimous approval last week to the bill, which was originally offered by the late Rep. Donald McEachin.

“The Great Dismal Swamp is a natural treasure and tells an important story about the rich history and contributions of Native and African Americans in Virginia,” said the senators in a joint statement. “We’re glad that this bill to begin the process of designating the Great Dismal Swamp as a National Heritage Area is headed to the President’s desk to be signed into law. We’re especially grateful for the leadership of our dear friend and colleague, Donald McEachin, who long fought to get this bill across the finish line so that the Great Dismal Swamp and its history can be appreciated by generations to come.”

McEachin led the introduction of this bill in the U.S. House, and Warner and Kaine introduced its companion in the U.S. Senate. The bill passed the House of Representatives in September.

This legislation comes as Suffolk prepares to develop a $1.3 million trailhead project, which was announced earlier this year. The project was first written into the Great Dismal Swamp Refuge’s comprehensive plan in 2006 in hopes of expanding environmental education. However, the project just recently started making progress when the Friends of the Great Dismal Swamp Wildlife Refuge received a $50,000 grant from Dominion Energy. The grant was used to purchase the land and materials necessary for the enhancement.

The new designation in the National Heritage Act bill should provide another boost for their fundraising for the project as the groups work to secure more federal and state grants.

In a statement released earlier this year, the Wilderness Society Southeast Senior Manager Jill Gottesman noted that the Great Dismal Swamp is one of the most ecologically and historically significant areas on the east coast.

“In addition to being the ancestral homeland of the Nansemond Indian Nation and the historic lands of the Haliwa-Saponi and Meherrin Tribes, the Great Dismal Swamp contains one of the only water-based stops on the Underground Railroad,” Gottesman said. “It provides clean air and water, and a National Wildlife Refuge that preserves an entire wetland ecosystem. As we work to protect 30% of the nation’s land and waters over the next decade, we recognize the importance of the Great Dismal Swamp for its biodiversity, the communities who maintain a close connection with the landscape, and the role it has played in our country’s history.”

The Great Dismal Swamp, which includes a National Wildlife Refuge, is one of the most unique and valuable cultural and ecological landscapes on the East Coast and offers unique educational opportunities and recreational activities, according to the the legislation. It is home to the historic and ancestral lands of many indigenous tribes, including the present day lands of the Nansemond Indian Nation.

It has the largest known collection of archaeological artifacts from maroon colonies. It was also one of the only known water-based stops on the Underground Railroad and home to a thriving community descending from early colonial Free People of Color whose families resisted American slavery and found refuge in the area, according to the details in the legislation.

Great Dismal Swamp Stakeholder Collaborative Leadership Team’s Elder Benjamin Keeling, Chief Emeritus Sam Bass, Heather Barlow and Alexa Sutton Lawrence said the legislation is based on the work of 35 groups in a grassroots effort to preserve the unique history and ecology of the Dismal Swamp as a refuge for wildlife and people.

“We believe that this legislation recognizes not only the importance of the Dismal Swamp as it is now, but also the role it has played in our history as a community and a country,” the Collaborative Leadership Team said in its statement.

The trailhead project announced earlier this year will make the Jericho Trail more accessible by adding signage and moving the trailhead closer to White Marsh Road. To go along with moving the trailhead, the project will also include a new parking lot, pavilion and the visitor/educational center so that everything will be together in one spot.

“We have five trailheads where people can go to enjoy the refuge, but it’s not a one-stop shop,” said Chris Lowie, the project manager, “We want people to be able to come to one place, get the information they need and then go and enjoy the refuge without having to drive to several different places.” Lowie’s comments were included in a News-Herald article from May.

Another focus of the project is to highlight and preserve the history of the swamp, which is believed to have been a trading center for Native Americans as well as a route and destination for freedom-seeking enslaved people.

Adjacent to the new trailhead, the City of Suffolk will purchase a piece of land to create a city park, according to that May news story. The city received a $200,000 grant from the Virginia Outdoors Foundation that will be used to both purchase the land and build the park — including a playground and picnic area.

The Great Dismal Swamp National Heritage Area Act is championed by numerous organizations committed to safeguarding the Swamp’s unique history and resources, including the Wilderness Society, the National Trust for Historic Preservation, the Nature Conservancy and the Great Dismal Swamp Stakeholder Collaborative, a coalition that includes the Nansemond Indian Nation, the Association for the Study of African American Life and History, the Meherrin Indian Nation, the Haliwa-Saponi Indian Tribe, Preservation Virginia and the U.S. Fish and Wildlife Service.

Editor’s note: Updated first paragraph at 9:15 a.m., Wednesday, Dec. 28 to reflect that the bill does not designate Great Dismal Swamp as a National Heritage Area. It begins the process.