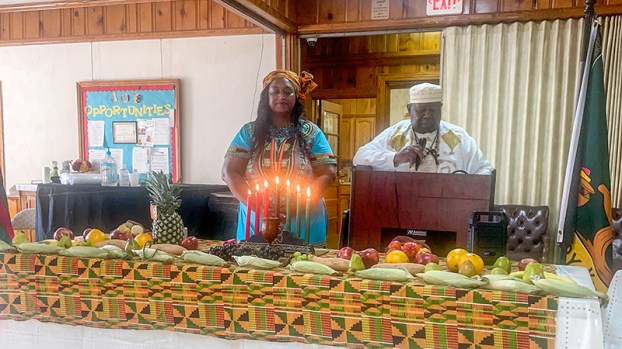 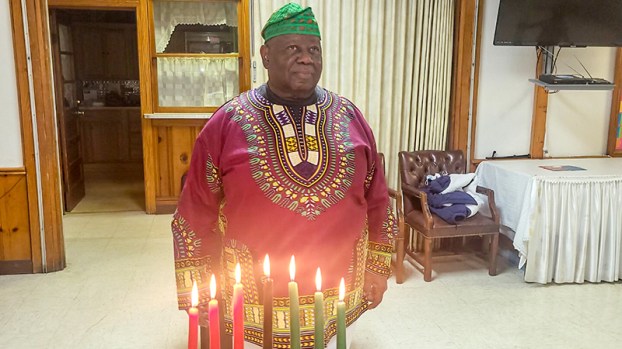 “Kwanzaa is not a religion, it doesn’t replace anyone’s religion regardless of whatever anyone’s religion affiliation is…,” explained Rev. Dr. Isaac J. Baker, who is also known by his African name Akinwale Baba Amoye. “Kwanzaa in essence really, is about an African celebration of the principal ways of living that would help one to live daily or yearly.”

After his time in the military, Baker returned to Suffolk in the early 1990s and served with First Baptist Church Mahan, where he met his wife. Baker soon returned to MBC and is currently chairman of the Afrocentric Ministry.

“I was raised up there, I was baptized there back in the early ‘50s, then in the early 60s, I left and went into the military. In the military, you’re moving around the world, but you never forget where you come from, where your roots are,” Baker said. “You’re still the ministry’s servant, the spirit is still with you.”

Baker explained the adoption of his spiritual name, Akinwale Baba Amoye, back in 2004. He also shared more about the ceremony and how those who are conscious and afrocentric begin to feel the spirit.

“After about a month-long ceremony in preparation and then at the conclusion of that program, your name is given from the priest, and was given to him from one of the deities called Orisha,” he said.

Baker spoke of the church event that celebrated Imani, or “Faith.” Along with dancing and families gathering together, there was the Karamu feast.

“The Karamu feast is a feast about the meal, Baker said. “We as a family, we come together, we celebrate, we sit around the table, talk about things that happened this past year, things that we’re looking forward coming in the new year, and it’s a four course meal that we serve.”

With the blessing of their daughter and her sister, the feast included black-eyed peas, sweet potato yams, rice with turkey and corn, which represents the youth.

Finally, Baker talked about the future of the event in 2023, along with getting ready for Black History Month, Juneteenth and honoring the ancestors of Nat Turner from Southampton County.

“I just wish people will come out and just really watch, observe and learn what Kwanzaa is about and it’s not nothing negative, it’s very positive,” Baker said.