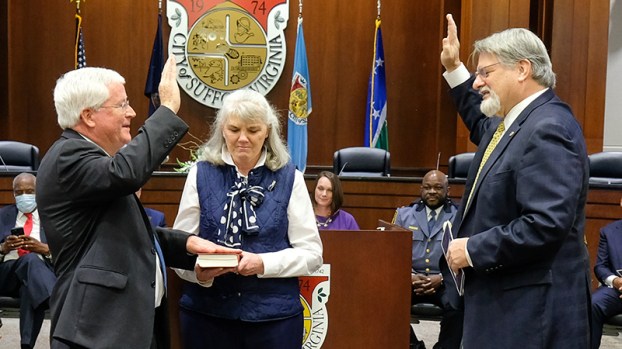 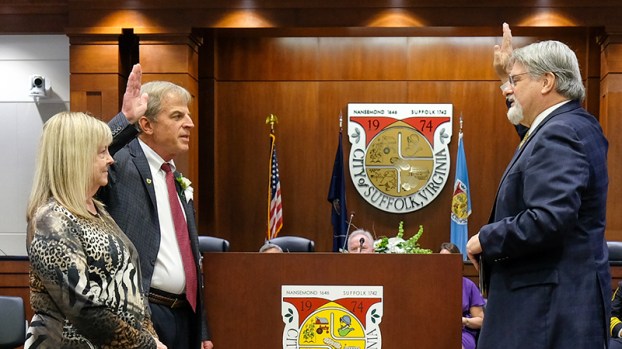 Timothy J. Johnson is sworn-in on Tuesday, Jan. 3 during the Investiture Ceremony held at City Hall. 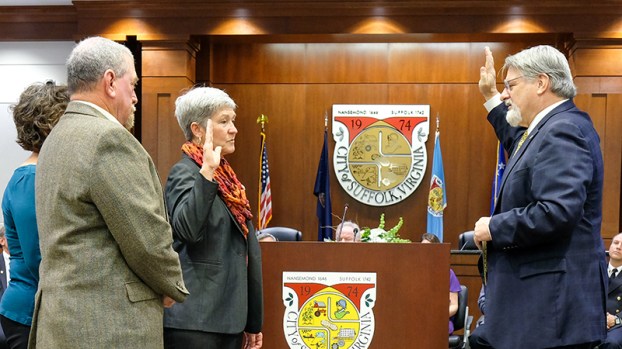 Shelley Butler-Barlow is sworn-in on Tuesday, Jan. 3 during the Investiture Ceremony held at City Hall. 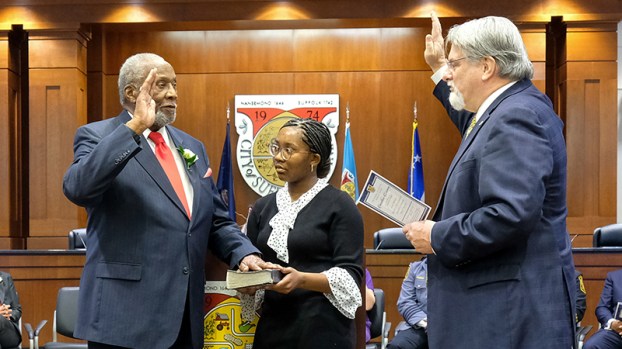 Leroy Bennett is sworn-in on Tuesday, Jan. 3 during the Investiture Ceremony held at City Hall.

Editor’s note: This article contains corrected information from the Jan. 4 story on selection of Suffolk’s vice mayor. Council named Lue R. Ward Jr. as the new vice mayor, replacing Leroy Bennett who was sworn in for another term and continues to serve.

Following the ceremony,  City Council held its reorganizational meeting where Ward was named as vice mayor.

A Suffolk native for more than 30 years, Ward is an author, television and radio show host, and founder/publisher of Having Church magazine alongside Suffolk Happenings and Hampton Roads Happenings. Ward is also former president of the Nansemond Suffolk Branch of the NAACP and currently serves on the Western Tidewater Regional Jail Authority Board and the City School Advisory Committee on Collaborative Fiscal Concerns.

During the ceremony, each of the council members spoke to express their gratitude to the public.

Bennett said his focus is all about the people he serves.

“I have no personal agenda. My agenda is the citizens of Suffolk that I can help anyway that I can,” he said. “People in the Cypress Borough, I can’t thank you enough.”

Councilmember Butler-Barlow also spoke to express her gratitude to those who supported her throughout the campaign.

“I want to say thank you to all the people who voted for me and I also want to say thank you to the people who did not vote for me, because I want to listen to you all too,” Butler-Barlow said at the ceremony. “Everybody has ideas about what we can do and what we can do better. I think listening is the first step in being able to make that happen.”

Likewise, Councilman Johnson spoke of his gratitude to the public.

John T. Rector, who previously served the city as a member of the Planning Commission for 16 years as well as its vice chair, was sworn-in as representative of the Suffolk borough following the end of retired Councilman Donald Goldberg’s term.

Rector, who has been a Suffolk native for more than 35 years, has previously served as chairman of the Planning Commission’s Committee on Ordinances and is a current member of the 2045 Comprehensive Plan Steering Committee. Rector also has served as vice president of Berkley Machine Works and Foundry Co. Inc. in Norfolk, and Berkley Machine LLC following the business’s move to Suffolk in 2008.

“I’m very much looking forward to the opportunity to work with each and every one of you to meet not only the challenges that face our great city, but also to take advantage of all the opportunities that lay before us to keep Suffolk moving forward,” Rector said. “We’re blessed to live in such a diverse city that affords the opportunity to either live on a small urban lot, or live on a hundred acre farm, or anything in between.”

“Don has provided me with a model of leadership and service to the community spanning decades that would be a genuine challenge for me to emulate,” he said. “From education, to economic development, to serving on this council, Councilman Goldberg has dedicated his professional life to making our city a better place to live and work, and I know that I speak for many when I say that his leadership will be missed.”

“Your willingness to step up to engage and continue public service by way of holding political office should be commended,” Duman said at the ceremony. “I look forward to what this council along with our competent management team and dedicated employees will be able to accomplish for our citizens over the next two years as we move our city forward.”