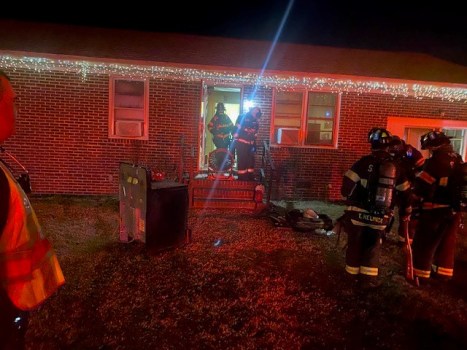 The range involved in the Jackson Road residential fire can be seen sitting in front of the home after firefighters attached the blaze and limited damage to the kitchen.

A Friday night fire caused moderate kitchen damage to a home in the 3400 block of Jackson Road.
Suffolk Fire and Rescue units responded Friday, Jan. 6 to the residential structure fire after emergency communications was contacted at 10:11 p.m. The first unit arrived on scene at 10:20 p.m.
A Fire and Rescue news release said Engine 2 arrived on scene to find light smoke showing from the front door of the home. Crews were able to extinguish a small fire in the kitchen.
Six occupants had evacuated prior to the arrival of fire units. One person at the scene was transported to Sentara Norfolk General Hospital for possible smoke inhalation. No firefighters were injured.
The kitchen sustained moderate fire damage to the stove, range hood and surrounding cabinets. The news release said the cause of the fire was determined to be unattended cooking.