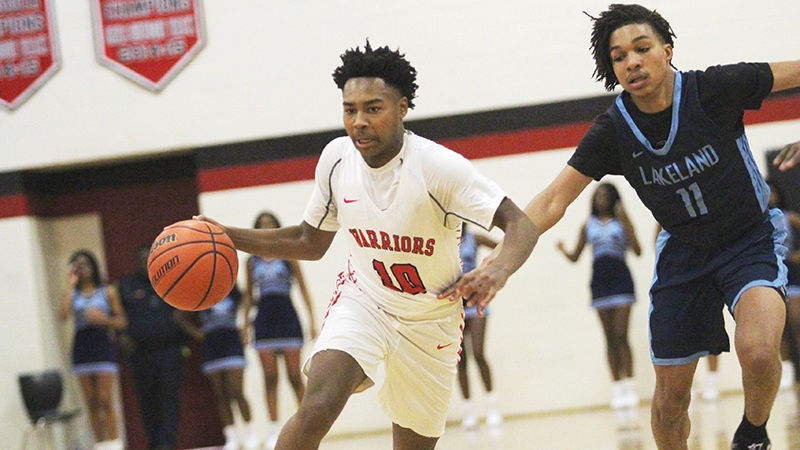 In action just three days after seeing their seven-game winning streak halted, the Nansemond River Warriors boys basketball team had an important Southeastern District matchup with one of its Suffolk rivals, the Lakeland Cavaliers, which came in at 5-3 overall and turned some heads a month ago when they knocked off a Petersburg team that played in last year’s Class 3 State Championship.

Trailing 16-13 moments into the second quarter, the host Warriors appeared to have their hands full. However, over the game’s next 20 minutes, they proceeded to outscore the visiting Cavaliers 51-15 for one of their more dominant stretches of play in this 2022-23 campaign.  The burst that saw four starters score in double-figures led to a convincing 69-39 victory that pushes Nansemond River’s record to 8-2 overall, and in the process, inches veteran head coach Ed Young closer to a career milestone.

“Probably our best basketball was the first quarter against Deep Creek early last month. We went on a 28-8 first quarter run in that game and did everything well.  This was probably our second best,” noted Young after notching his 496th career win with 274 of those coming at the helm of the Warriors since 2004.

“Coming off the loss to Franklin where we shot a season-low 31% and scored a season-low 53 points, I was a little worried,” he said. “At the beginning, we ran what I call our headache offense. They run it, I get the headache. We missed some shots, turned the ball over and let some guys get behind us on defense. We were stagnant.”

Nansemond River didn’t match the intensity the Cavs brought through one quarter, shooting just 25% from the field (3-of-12) before finding their groove. A primary focus of the Warriors defensive attention was senior guard Ashton Holland-Lane, who ended up with seven points, eight rebounds, three blocks and three steals for the Cavs.

“Lakeland comes with a lot of energy. We reminded them what we said on the board. Dictate pace. Run it and score. And then defensively, no matter what we do, here are the guys we have to zero in on. Ashton was one,” Young said.  “If I’m not mistaken, he was averaging about 18 per game. Once we calmed down and shared the ball, we’re pretty good and it showed.”

The Warriors saw their 28-22 half-time lead quickly balloon in the third quarter, thanks to the wing combo of junior Saleem Williams and sophomore Devin Gaines along with the shooting ballistics of sophomore Israel ‘Izzy’ Lewis, who scored six straight points during an 18-3 run by knocking down a three-pointer and then converting three straight free-throws after getting fouled.

“What’s funny is he’s started every game but two this year,” Young said of Lewis, whose older brother Jeremiah was a standout for the program and averaged a double-double his senior year when the squad made the regional semifinals in 2019. “I told him in practice I’m going to bring you in as the first guy off the bench and I think we’re going to need an offensive spark. Izzy gave us that, plus he played decent defense and he took a charge. His best basketball is way ahead of him.”

Gaines ended up with a game-high 16 points to go with eight rebounds.  Williams nearly posted a double-double with 12 points and eight rebounds. Likewise for senior forward Chris Hayes, who finished with 13 points and nine rebounds. Senior point guard Jalen Duckett chipped in 13 points, five assists and four steals. The Warriors ended up with a 37-27 advantage in the rebounding department and turned it over just three times in the second half.

“Saleem is a bigger body and got on the glass. We switched defenses, which made them hesitant a little bit to get into their offensive swing.  They settled for long jump shots and we secured rebounds,” commented Young.

The two teams will square off again Feb. 3, a couple weeks before the playoffs commence.

“We don’t have at-large bids in high school. We’re not playing a Peninsula District or Eastern District type of schedule, [but] it’s conducive for us to get better as we the season moves on,” said Young, trying to position his team for the Region 5B Tournament, where the top six records qualify for postseason.

“The region doesn’t have a complicated formula. If I’m not mistaken, it’s three points for a win, none for a loss and we go from there.  So if you don’t win, you don’t get in,” he said. “We’re trying to get as many wins as we can. If we’re lucky enough to get in, we have to take care of business because we know anybody in the regional will be strong and tough to play. Hopefully we will be, too.”