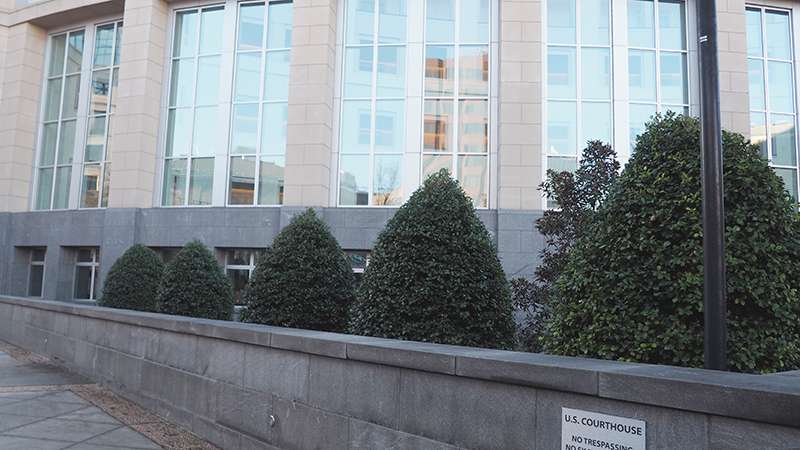 The jury in Virginia National Guard 1st Lt. Caron Nazario’s lawsuit against Windsor Police Officer Daniel Crocker and ex-officer Joe Gutierrez has adjourned for the weekend without reaching a verdict.

Nazario, who is of Black and Latino descent, accuses the two white officers of racially motivated police brutality for holding him at gunpoint during a Dec. 5, 2020, traffic stop and shouting conflicting commands at him to keep his hands out of his car’s window and exit the vehicle. Video footage of the incident, which went viral in April 2021 and led to Gutierrez’s firing, culminates with Gutierrrez repeatedly pepper-spraying Nazario and using knee-strikes to force the lieutenant out of the car and onto the ground.

Crocker had pulled Nazario over for allegedly lacking a rear license plate. Gutierrez responded to the scene when Crocker reported a “felony traffic stop” to dispatchers. Nazario had a temporary New York plate taped to the inside of his car’s rear window, but Crocker said he didn’t see it and accused the lieutenant of eluding police for having driven roughly a mile down Route 460 to a BP gas station before stopping.

Nazario, who was recorded in the video telling the officers “I’m not getting out,” testified Monday that he believed he would be “stepping right into danger” if he did so while Crocker and Gutierrez were pointing guns at him. The video footage records Nazario repeatedly asking the officers, “What’s going on?” Gutierrez at one point answers by telling Nazario he was “fixin’ to ride the lighting,” a phrase Nazario’s lawsuit contends is a colloquial reference to an execution but Gutierrez, in a video deposition, testified was a reference to a taser.

On Tuesday, Nazario’s girlfriend, Sadie Madu, took the stand. Nazario, she stated, began having nightmares and talking in his sleep around February 2021, even shouting statements like, “It’s the risk of driving while Black!” – a sentiment he hadn’t expressed prior to his encounter with the two officers. He’s also urinated in the bed two to three times over the past two years, and sometimes starts “grabbing his gun”

Nazario holds a concealed carry permit for a handgun and had the weapon with him in the car the night he was pulled over. After Gutierrez forced Nazario from his car, Crocker had removed the firearm and checked its serial number, which U.S. District Court Judge Roderick Young ruled in August constituted an illegal search.  Nazario has always “been one to have a gun,” Madu said, but since the 2020 incident has started carrying the gun from room to room inside the couple’s home, and continues to do so to this day. Since the birth of the couple’s son in September 2022, Madu and Nazario have stopped sleeping together, she testified.

On Wednesday, Crocker and Gutierrez each took the stand and declined to apologize to Nazario. Crocker has retained Anne Lahren of the Virginia Beach-based firm Pender & Coward. Gutierrez is represented by Jessica Swauger and Coreen SIlverman of the Glen Allen firm Hancock, Daniel & Johnson.

On Thursday, Gutierrez’s legal team called West Jordan, Utah, Police Chief Ken Wallentine and Crocker’s team called former Tuscon, Arizona, police officer-turned-YouTube content creator Brandon Tatum to the stand to testify as use-of-force experts. Both opined that the officers were justified in their actions. Nazario’s attorney, Jonathan Arthur, called his own use-of-force expert: former police officer-turned-attorney Mark Bong. Bong, according to Arthur, frequently represents police officers accused of crimes, but in this case, testified that the use of force was “absolutely not reasonable.”

Arthur also called upon Nazario’s psychiatrist, Dr. James Sellman, and psychologist Shawn Utsey to testify. Nazario had told jurors on Monday that he’d been diagnosed with anxiety and post-traumatic stress disorder, or PTSD.  PTSD symptoms, according to the American Psychiatric Association, can include nightmares or flashbacks, and feeling detached or estranged. It can occur as a result of living through combat, rape, a natural disaster, historical trauma, domestic violence or bullying.

Friday morning, Nazario’s battalion commander, Lt. Col. Charles Reinhold, took the stand and testified Nazario had gone from being a “very outgoing” officer to someone who, following the incident, was “disheartened” to be in his uniform.

Reinhold said Nazario had come to him the day after the traffic stop to talk with him about why the officers might have reacted the way they did. On cross examination by Swauger, Reinhold testified that the officers may have suspected Nazario’s car of transporting drugs, noting “drugs tend to go through rural towns.”

Swauger also asked Reinhold why, if Nazario had been suffering mentally from the traffic stop, he had allowed the lieutenant to deploy to Washington, D.C., in the aftermath of the Jan. 6, 2021 attack on the U.S. Capitol by a mob of former President Donald Trump’s supporters. Nazario was reluctant to go but was Reinhold’s only medical service officer, the colonel testified.

During closing arguments, Arthur contended that while the traffic stop may have started out as lawful, it “did not remain lawful,” and that Nazario had the right to resist what he characterized as the officers’ unlawful use of force. Arthur then characterized the officers’ decision to release Nazario without charges after the roughly 1½-hour traffic stop, and without informing his Army superiors, if he would ‘chill” and “let this go,” was not an act of leniency but rather a threat, and admission that they “understood their actions had transgressed the law and they wanted to cover their tails.”

Silverman, in her closing, argued Gutierrez’s conduct was “in response to Mr. Nazario,” whom she blamed for escalating the situation by refusing multiple times to exit the car. She called Nazario’s explanation of being unfamiliar with Windsor as the reason he passed several well-lit businesses before stopping at the BP station “not credible,” contending that at the time of the traffic stop he’d been driving through Windsor for months to commute from his Petersburg home to a National Guard base. She also highlighted the testimony of psychiatrist Dr. Keyhill Sheorn, whom she’d called to the stand to contest Nazario’s diagnosis of PTSD.

Richard Matthews, co-counsel to Lahren for Crocker, stated in his closing argument that Crocker could not have acted with “malice,” since after Nazario was in handcuffs, he’d gone into the BP convenience store to get him water he’d requested, and had even warned Nazario that pouring it over his eyes, as he planned to do, would make the burning sensation from the pepper-spray worse.

U.S. District Judge Roderick Young ruled in August that Crocker’s removal of a firearm from Nazario’s car to check its serial number constituted an illegal search. As such, the jury will be tasked only with awarding damages for the search, as well as deciding whether either officer’s actions constituted “false imprisonment” and “assault and battery.”