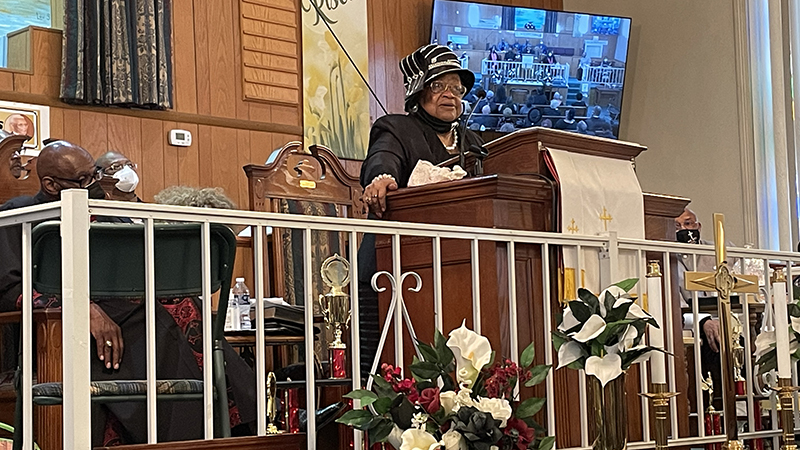 Rev. Dr. Naomi P. Chambers thanks the church for their faith in her as the new leader of Pleasant Union Baptist Church

Chambers also is just the eighth person to be installed as pastor of the church in its 126-year history.

She was officially installed as Pleasant Union’s new pastor during the installation service held on Sunday, Jan. 15, located at 215 Webb Street.

After graduating from Norfolk County High School in 1950, Chambers obtained her bachelor’s of science degree from Elizabeth City State University in 1955, and both her honorary doctor of humane letters and master’s of religious education in 1987 and 1997 respectively at Virginia University of Lynchburg. She was licensed Jan. 24, 1988 and ordained as co-pastor of PUBC July 6, 1993.

Among her awards and recognitions, Chambers received the Virginia Ministers’ Wives and Widows Outstanding Service Award from 1988-1992, Teacher of the Year in 1989, Suffolk City Proclamation of Naomi Powell Chambers Day on July 19, 1997 and a Certificate of Recognition of The Naomi P. Chambers Prayer Breakfast which was named in her honor by the Suffolk Association of Ministers’ Wives and Widows in 2001.

On July 28, 2021, both Chambers and her husband received a Certificate of Recognition from the City of Suffolk as the first husband and wife to serve as moderators in the Sharon Missionary Baptist Association as pastor / co-pastor for spiritual guidance and leadership.

“She’s a true example of great faith and spiritual inspiration,” Mayor Duman said at the service. “I appreciate, we appreciate, everything that you do for our community. It’s an honor to acknowledge your installation and I want to extend my heartfelt wishes and much continued success with all your personal and professional endeavors.”

“People need guidance and teaching,” he said. “Dr. Chambers has that experience. She knows how to do that.”

During the Act of Installation led by the Rev. Dr. Robert L. Hobbs, pastor of Metropolitan Baptist Church Suffolk, Chambers proclaimed her devotion to the church during the ceremony.

“Unto you, people of this church, I pledge loyalty and devotion,” Chambers said during the installation.

“I shall strive to share with you both the burdens and joys of our endeavor. In fellowship I shall seek at all times to express the spirit of our master. I shall try as God gives me the strength, and grace to be among you a good minister of Jesus Christ.”

After the service, Chambers expressed her gratitude to the church members for their trust in her as their new leader.

“I feel honored that the people would consider me and have confidence that I would be able to carry on his legacy, and also carry on my legacy,” said Chambers after the installation.

Finally, Chambers shared her vision of the future.

“I want to see the growth of the church and try to reach out and get more young people to come and be a part of the church,” she said. “And particularly that we’ll be able to generate some men in the church, because that is missing in the church.”