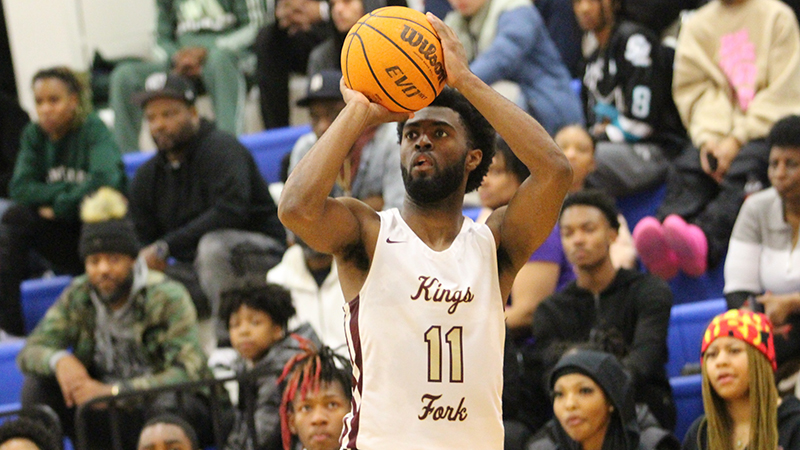 The Bulldogs’ coach said King’s Fork is fortunate to have Kaleb Brown, as he helped senior guard Sam Brannen be able to score 14 points, on his way to be the game’s MVP.

Participating in the nightcap of the MABC Classic at Kempsville High School in Virginia Beach on Saturday night, the King’s Fork Bulldogs basketball team gave the packed gymnasium a first quarter to remember.

Taking on a Maury Commodores team out of Norfolk that reached the VHSL Class 5 State Championship last year, the Bulldogs fell behind 2-0 just a minute into play, but from there they blitzed them with 21 unanswered points to seize command. Their smothering, relentless defense bottled up the Commodores and proved to be a defining stretch in their 51-42 win.

“We’re capable of playing good defense,” said King’s Fork coach Rick Hite, whose team led by as many as 20 in the first half and took a 42-26 advantage into the fourth period before the Commodores made things interesting.

The game – like all contests in the showcase – was played with a 30-second shot clock, which generally is not the case in most VHSL basketball games. After shooting 52% from the field in the first half and holding Maury without a three-point make, the Bulldogs cooled off considerably in the second half against the zone defense, converting just 23.1% of their field goal attempts in the third period and 30% in the fourth quarter.

The Commodores opened the final stanza on a 13-2 run and had the basketball trailing by five points with under five minutes to play when the King’s Fork defense re-claimed control.

“With a shot clock, you’re never out of a game. That’s why I wish we’d go to a shot clock because I’m in favor of one. It’s next-level basketball,” Hite said.

“At the end of the day, they’re Maury. That’s what they’re going to do, come back, because they’ve got tough kids and they’re well-coached,” he said. “We got off to a good start, they made their run and then it was a basketball game in the fourth quarter.”

Key shots were made in the second half by sophomore guard Adarius Boston, who made a pair of three-pointers. His calm demeanor helped immensely as Maury tried to make a rally.

“He’s a killer out there on the court. To see him smile is rare.  He’s a basketball guy all the time.  He’s got a bright, bright future,” Hite said.

“Our lineups were thrown off since Bryson [Barber] was sick. He’s been starting for us, so we had to change our lineup and it messed with our depth,” he said. “It was interesting to see how we would play, but Boston did a great job coming in with that first group.”

Also playing a pivotal role was senior guard Sam Brannen, chosen as the game’s Most Valuable Player with 14 points, five rebounds and five assists. In recent seasons when the Bulldogs have made a state tournament run, they’ve had high-caliber guards at the forefront of their attack, such as Jayden Epps (now playing at Illinois) and George Beale, who’s at Norfolk State.

Brannen is often their primary ball-handler and scoring threat, but there are some very dangerous complementary pieces around him.

“We can play him on the ball, off the ball. We’re fortunate to have Kaleb Brown and Elijah Walker come in the game,” Hite said. “We also have a ninth grader that’s playing right now, Zyon McGlone.  So we have some other guys that can play with the ball to allow Sam to be the scorer that he is.”

In addition to the lifts provided by Boston, Brown, Walker and McGlone, junior 6-foot-5 wing Zekhi Darden helped trigger an 8-0 scoring run in the second quarter with a couple of blocked shots and a dunk.

“Zekhi wasn’t even going to play in this game. He took a knee in the thigh the game before that took him out,” Hite noted. “But he’s a tough kid and he said, ‘Coach, I’m going.’ He pretty much played on one leg.”

Now at 8-3 overall, King’s Fork has played some challenging games against teams from around the Commonwealth and outside the state. They certainly will have a target on their backs the rest of the regular season against Southeastern District foes, yet they relish and embrace getting everyone’s best shot.

“We play these games to get guys to find an identity of what this team is.  It takes time to find out what this team is,” Hite said. “I think it’s an unselfish group with multiple guys who can put the ball in the basket, but they’re really tough, mentally and physically.”