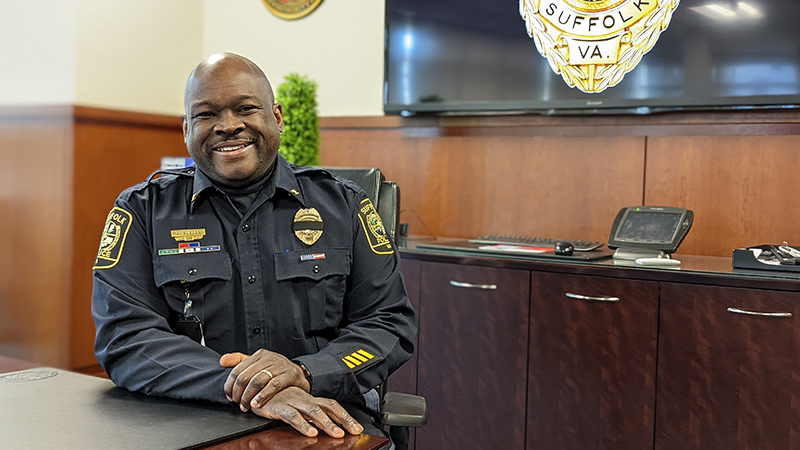 Suffolk Police Chief Al Chandler sat down recently with the Suffolk News-Herald and answered questions about a number of issues.

The Suffolk Police Department is continuing its march forward in the battle against crime by refocusing efforts on specific areas.

Chandler shared the measures that police are taking in their fight against criminals.

Chandler discussed the department’s focus on providing traffic enforcement and visibility on U.S. 58, truck enforcement in Suffolk Meadows and fighting against gang activity and criminal gathering areas in the downtown area.

“As our city is growing, what we found was the officers are running here, running there, trying to fit all of this into a day,” the chief said. “So what we decided was to pull back from a lot of that and get very, very specific and strategic about what we were looking at.”

Chandler pointed to how criminal acts are constantly changing in recent times.

“What we’re finding now is, our crime and criminal activity is a lot more transient. In past times, most of your, for instance, your drug transactions were done in your neighborhood settings,” he explained. “Now we’re finding more drug transactions being carried out in public parking lots. That changes dramatically what is taking place.”

Chandelier said another thing that officers are seeing is the fact that other people from other areas and localities are coming to Suffolk to make transactions.

“So it may be, for instance, one person from one of the seven cities and one person out of the western part of the state, and if they want to make a drug transaction, they’ll meet in the middle,” he said. Sometimes we have people in our city committing acts of crime that aren’t associated with our city. So the locations in which they choose would be a little different than what we have historically seen.”

Following the presentation, Chandler took the time to address the recent crimes of the past weekend.

“I think the crimes that took place this weekend really shook our city, because we know that this is not Suffolk,” said Chandler at the meeting. “And as a police department, while we are saddened by what happened, it has strengthened our resolve. As a police department, we have stepped up. We are doing everything that we can possibly do and I cannot give enough accolades to the men and women that wear this uniform and the work that they have done this weekend.”

Chandler also provided additional comments on the issue. Speaking on recent crimes, he noted how people appear to resort more to violent acts instead of respecting each other as human beings.

“While I can’t speak specifically about those ongoing investigations, I can say of the incidents we have seen lately, we have seen many of our incidents involve disputes and retaliatory actions,” said Chandler. “I believe that the basic ability to work out differences without acts of violence seems to have diminished.”

He said the accessibility of guns by people who should not have them makes the use of a firearm attractive to some criminals.

“I believe many people of our society have become desensitized to violence,” Chandler said. “I believe that we continue to see the devaluing of human life to the point that we have people who are willing to shoot individuals recklessly.”

On gang activity, he pointed out how each case can provide many differences.

“We are finding that so many of these cases are very different and have different actors involved. While we have found some criminal gang nexus in some, there are others that involve gang members but are not necessarily connected to gang activity. We have other incidents of violence that have no gang nexus at all,” Chandler said.

He said each investigation has its unique parts.

“We continue to work each case independently while simultaneously keeping in mind that the potential for violent actions can be connected to criminal street gangs,” he said. “It is essential that we take the time to explore every option to ensure that we complete a robust and thorough investigation with every case.”

On drug activity, Chandler noted its continued impact on an uptick in crime.

“Illegal narcotics continue to play a major role in some of the violence we have seen in our city and around the region,” he explained. “We believe we are seeing a noticeable uptick in violence surrounding the sale of illegal marijuana. We continue to work these cases diligently.”

“We continue to make arrests, confiscate narcotics and the associated proceeds,” he said.

Along with the assistance of the Flock Cameras system for investigations, Chandler further explained ways the police are trying to curb criminal activity, noting technology and the assistance from the citizens.

“Our equipment to extract data from mobile phones has also served as an amazing resource in our investigations,” he said. “The video we have received from citizens in many different ways has served to assist with investigations.”

The chief said they continue to reach out to citizens to provide them with all information that could possibly assist in prosecution.

Likewise, Chandler acknowledges the feelings of people who are frightened by these recent crimes.

“As a citizen of Suffolk, I fully understand the concern. As a husband and father that lives, works and shops in our city, I understand the concern,” he said. “It is a real concern. However, I also know that our city is safe. I’m honestly glad to see that our public refuses to accept shootings as being a normal part of living in Suffolk.”

“As the Chief of Police I can say that each and every day, the men and women of this department come to work determined to ensure that we do everything legally possible to protect the safety of every citizen and every visitor.”

Finally, Chandler provided a message on how people can keep themselves safe in their daily lives.

He added that the criminal actors are not winning and will not win.

“We cannot live our lives in fear. But we all must work together to identify and prosecute these law violators that disrupt the peace that Suffolk is known for,” Chandler said.