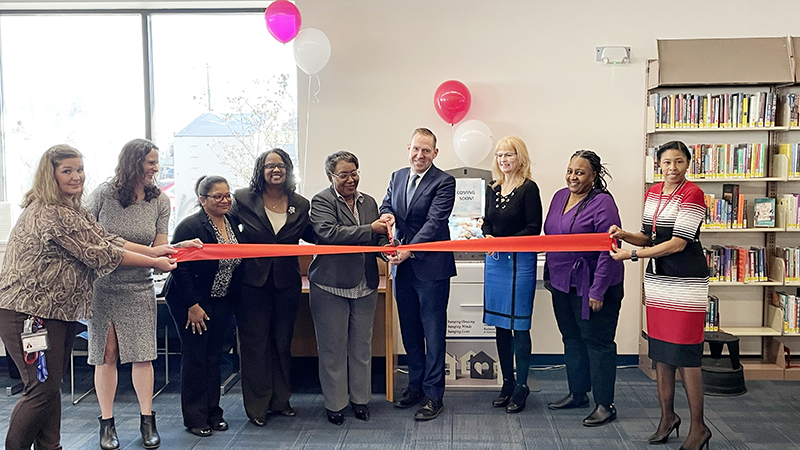 Suffolk Redevelopment and Housing Authority and Morgan Memorial Library officials were all smiles as they held a ribbon cutting to celebrate their partnership and opening of a new kiosk installed at the library located at 443 W. Washington St. Wednesday, Jan. 18.

“It’s a partnership that we’ve made with Suffolk Public Libraries to have this particular kiosk here, because our office is open 8 to 5… so they’re able to come in here anytime and fill out paperwork,” said SRHA Executive Director and Chief Executive Officer Tracey C. Snipes.

Snipes went on to explain how the kiosk can be used for local residents.

“I’m really excited because it’s just a logical connection for us in the community and it gives people extra options in order to complete any paperwork or other things that they have to do outside of the normal hours,” said Rudy of the new addition to Morgan Memorial Library.

Along with the kiosk, Community Engagement Manager Megan Mulvey spoke on the library’s resource guide and the regional housing hotline for the homeless and those in need.

“We have our resource guide that’s updated often with the most recent information about what resources are out there for housing,” Mulvey said.

“We always direct people to the housing hotline though because it’s the one stop shop,” she said. “But we’re excited to see more opportunities for housing access open up so when people are interested in public housing, they can look and see if there’s anything open, any availabilities, and see where they are on the waitlist eventually.”

Both Mulvey and Snipes shared their hopes for the kiosk.

“Another place to access – maybe it’s to pay a bill, to look up something, find out some information,” said Mulvey. “I think us, the library having longer hours, being open until 8 p.m., it makes us a place that’s accessible for people who are working during the day and won’t be able to get to the offices or maybe even talk to someone during business hours. They can get maybe some of their questions answered here.”

Snipes said her hope is this is going to simplify them getting in touch with someone who helps them.

“ This is just our way of outreaching outside of our office that we are still available,” she said. “With a touch of a button, you can send something to any of the eligibility workers so for some of our families that’s challenged with. They may not have a computer, they may not have a scanner, this is just the bridge that assists them with getting information to us.”