Soldiers honored for service in Africa 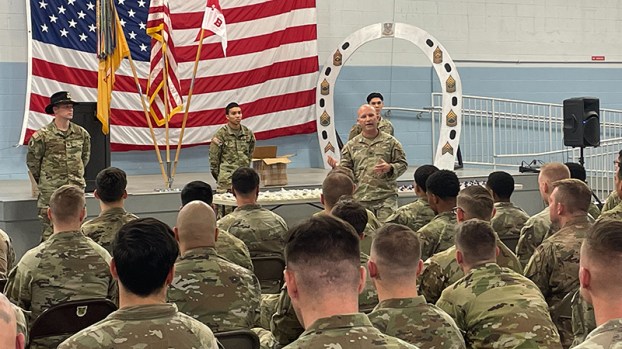 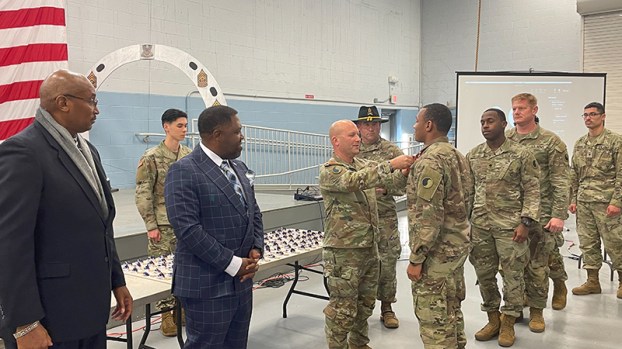 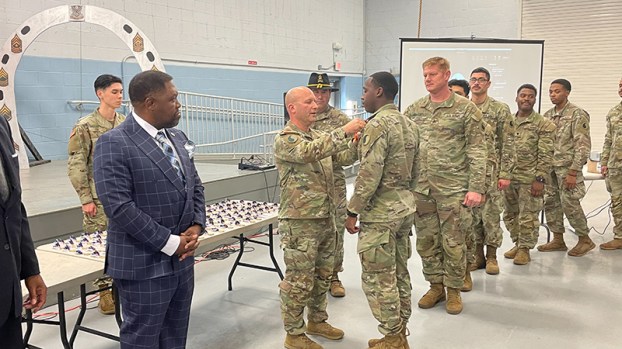 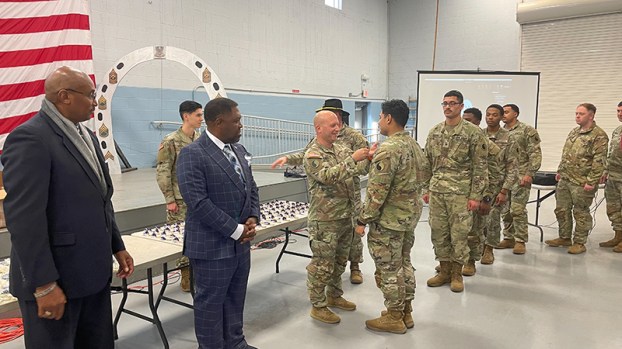 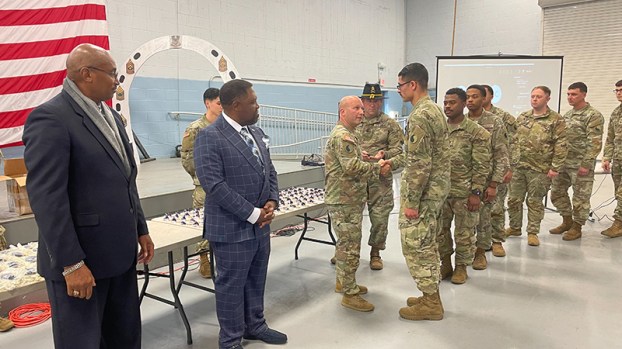 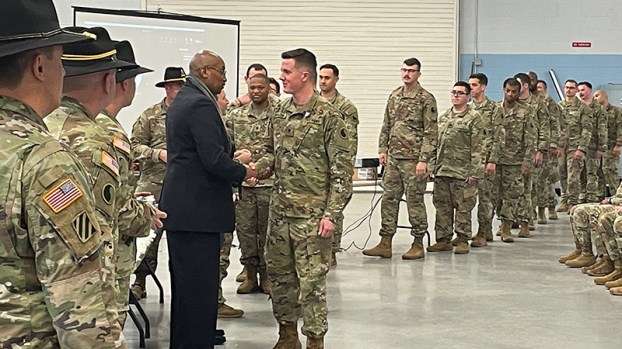 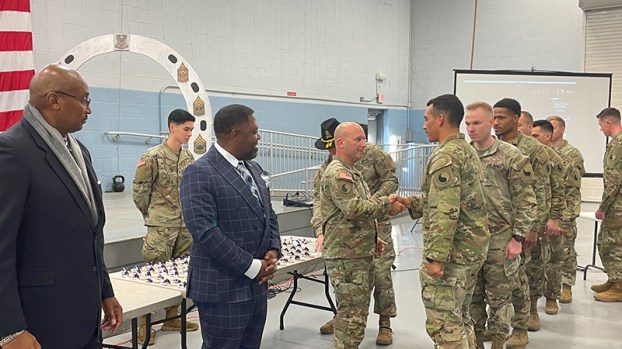 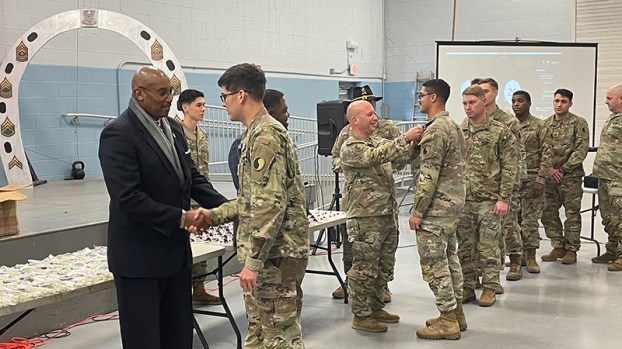 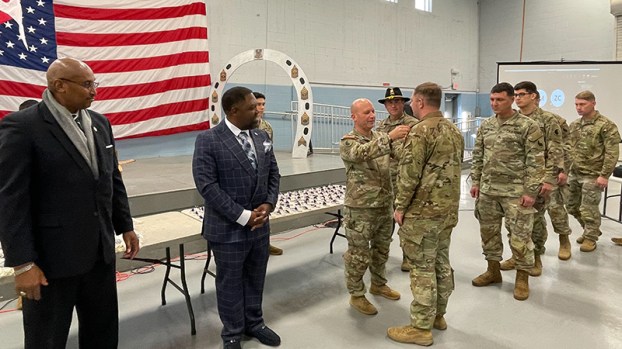 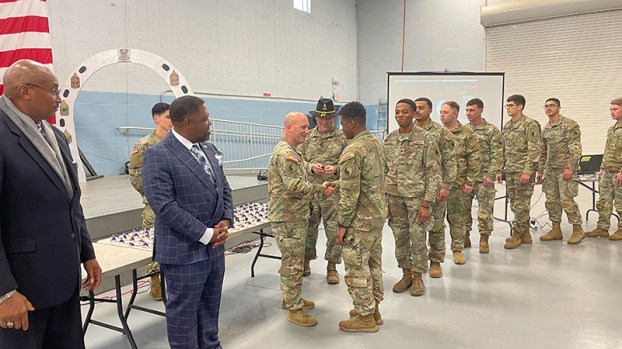 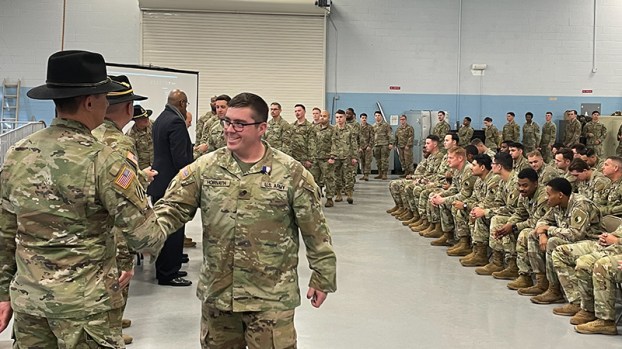 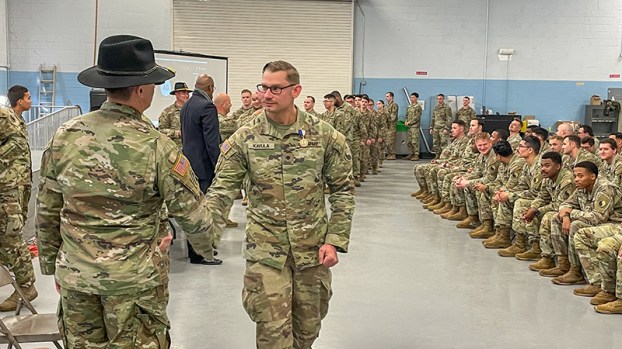 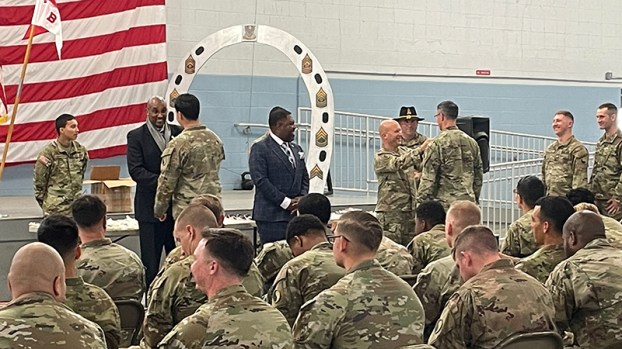 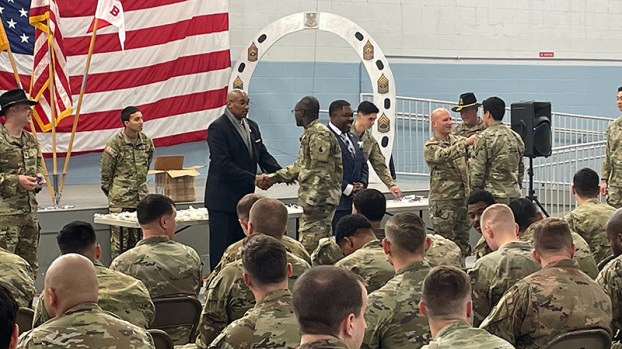 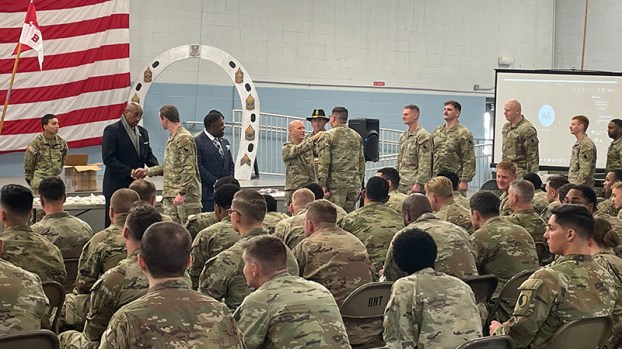 The Virginia National Guard honored its Task Force Red Dragon soldiers for their active duty in Africa with a Jan. 21 medal ceremony.

From November 2021 through September 2022, more than 1,000 Virginia and Kentucky soldiers conducted a security mission for Combined Joint Task Force – Horn of Africa and returned to Virginia to their loved ones from late September to early October 2022.

Alongside Suffolk, ceremonies were held to honor Virginia National Guard soldiers in both Lynchburg and Charlottesville.

The Virginia Governor’s National Service Medal was created in 2005 by then-Gov. Mark R. Warner, and recognizes the service of Virginia Army and Air National Guard men and women who are called to active federal duty since the September 11, 2001 terrorist attacks. In attendance at the ceremony were Del. Clinton Jenkins, School Board member Karen L. Jenkins, and Gene Garland, military liaison for U.S. Sen. Mark Warner.

Staff Sgt. Daniel Fisher, section leader for 4th Platoon, 3rd Squad and Capt. Ronnie Brown, commander of Bravo Troop, shared how they felt about being celebrated at the ceremony.

He went on to say it’s nice when the people who are leading the state that you’re serving understand and want to acknowledge that they appreciate it.

“I think just from what these soldiers accomplished over there, just inspiring them, these are the next future leaders of the 116 Brigade Combat Team,” said Capt. Brown. “So, what they learned on this deployment, bringing that back to the next generation of soldiers that are going to continue to defend this country, making sure that we maintain our freedoms that a lot of countries don’t get to enjoy.”

“Our accomplishments here are a direct result of the leadership of the junior officers, NCOs and Soldiers of the task force,” Tierney said. “Their sense of duty, selfless service and dedication to mission success is inspiring.”

The mission of CJTF-HOA is to conduct operations to enhance partner nation capacity, promote regional peace and stability, dissuade conflict and protect U.S. and coalition interests.

“We came together as a task force to fight and to win,” Tierney said. “We sharpened our edge by partnering with some incredible teammates. Our Soldiers walk away from this deployment as experts in their profession. It’s rewarding to see the growth of the team over this past year. Red Dragons, you are truly the next generation of leaders for the 29th Infantry Division and the 116th Infantry Brigade Combat Team.”

The task force also provided land-side security for multiple U.S. Navy port calls, enabling refueling and refit operations for U.S. ships operating in the vicinity of the strategic Bab-el-Mandeb strait. Throughout this base defense mission, the task force effectively integrated their enabler units into the defensive plan by augmenting medical personnel at each site, establishing indirect fire capabilities, and continuously worked to improve their defensive posture.

Additionally, TFRD provided the ground component of the East Africa Response Force, tasked with execution of a broad range of military operations, to include crisis response and security augmentation to Department of State or other U.S. facilities, support for military-assisted departure or non-combatant evacuation operations and other missions as directed.

The EARF conducted monthly emergency deployment readiness exercises to ensure readiness and preparation in responding quickly to crises within East Africa. Over the course of the deployment, the EARF supported Department of State missions in Nairobi, Kenya; Mogadishu, Somalia; and Durban, South Africa. The EARF also conducted two emergency deployment readiness exercises to rehearse the reinforcement of contingency support locations in East Africa.

The task force maintained an especially close relationship with French Armed Forces in Djibouti. TFRD Soldiers, French Forces in Djibouti and staff from CJTF-HOA participated in Exercise WAKRI from March 13-15, 2022. Exercise WAKRI, the largest annual French-led exercise in Djibouti, took place across Djibouti and provided realistic training in large-scale combat operations. The task force participated in the exercise with more than 100 Soldiers executing a diverse range of mission sets including reconnaissance, maneuver, sustainment and medical.