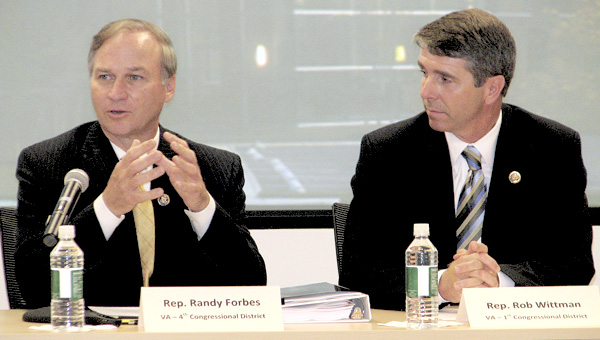 The region’s elected officials formed an informal joint task force of their own Wednesday in an attempt to save the U.S. Joint Forces Command.

The group proposed council resolutions, joint letters from the state assembly representatives, and even litigation to convince President Barack Obama to slow the process down.

Everyone from congressmen to city council members sat around the same table for a meeting at the Virginia Modeling, Analysis and Simulation Center, forming a game plan for responding to Defense Secretary Robert Gates’ recommendation to dismantle the command.

Congressman Randy Forbes (R-04) moderated the comments of the elected officials. Many were concerned about job loss and economic effects, but just as important to most was the effect on military readiness and interoperability.

“The truth of the matter is, lives will be lost if joint training is lost,” said Delegate John A. Cosgrove, whose district includes part of Chesapeake.

Cosgrove, like many others around the table, stressed that more facts must be known before the battle could begin.

“Our battle has to rely on facts, facts, facts and more facts,” Cosgrove said. “Feelings are not going to count in this.”

“We are ready to fight,” she said. “We just want to know the facts.”

Cosgrove offered to draft a letter from the Hampton Roads delegation to the General Assembly emphasizing support for the command.

Forbes also suggested that each city council and board of supervisors pass a resolution to send a letter to Obama, requesting that the process be slowed until more facts can be known. A chief criticism of the decision is that, in the eyes of many, the closure of any command should go through a Base Realignment and Closure process.

“There is inherent unfairness in the process,” Forbes said. “If the process is wrong, the result can be wrong.”

Forbes even said that if the process continues to go forward, a lawsuit to force a BRAC-like process could be in order.

“We can’t even take litigation off the table,” Forbes said. “It seems to us very clearly that if you want to shut down a command, you would have to comply with BRAC.”

Forbes disagreed with a suggestion from an audience member that leaders draft a “backup plan.”

“I don’t think we should throw in the towel until we have all the facts,” he said.