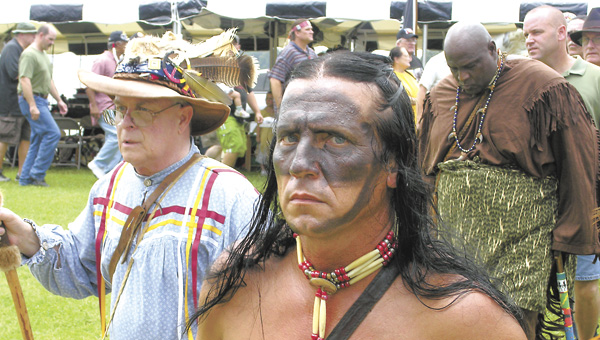 The Nansemond Indian Tribes will host their annual powwow this Saturday at Lone Star Lakes Park. The yearly celebration welcomes American Indians from through the East Coast. The public is invited to view dances, shop with American Indian vendors and enjoy plenty of food and festivities.

Annual tradition draws tribal members from all over

The powwow grounds open at 11 a.m. Saturday and Sunday. Grand entry is at noon on Saturday and at 1 p.m. on Sunday. The event ends at 6 p.m. both nights.

“Powwows are where native people come together and celebrate their heritage and try to share with other people and have it be a learning experience,” said Sandy McCready, secretary of the Nansemond Indian Tribal Association. “Years ago, it used to be just where they would come and have time together, like a family reunion.”

The event is free to the public, but donations are accepted.

A number of American Indian traditions will occur at the park before the celebration even starts.

“The grounds are usually blessed before anything,” McCready said. “That’s usually done at sunup in the morning.”

There are a number of different types of dances, McCready said, including traditional, straight dancing, fancy dancing and honor dancing.

“The oldest dance is the traditional,” she said. “Then you have your fancy dancing. Those are men and women that have the real bright-colored fancy regalia.”

Jingle dancing, another type of traditional dance, involves women in dresses with 365 jingles, one for each day of the year. Jingle dancing started when a man had a dream about his daughter dancing and he put a jingle on her dress, McCready said.

Another type of dancing, called grass dancing, originated when American Indians of long ago would go out in the field and dance to stamp down the tall grass, forming a dance circle for others to dance in.

The various drum groups that will be in attendance are one of the most important aspects of the powwow.

“There would not be a powwow without the drums,” McCready said. “They are what we consider the heartbeat of Mother Earth. Without that, you couldn’t dance. The drums are very important.”

McCready said the tribe has partnered with the city on the event.

For more information on the powwow, visit www.nansemond.org.